The carnage in global stocks and commodities witnessed throughout the latter half of last week has shown no signs of abating, with the meltdown in financial markets picking up fresh momentum as we head into the beginning of the new trading week.   The lack of any supportive monetary policy actions from the People’s Bank of China caused sentiment to take a fresh leg lower during the overnight Asian session, seeing investors capitulate in the face of the worse sell-off in equities since the Asian financial crisis and rotate out of high-yield assets in search of safety from further losses.   The Shanghai Composite finished its session off by almost 8.5%, while the commodity rout caused front month WTI to slam through the $40 level.   S&P futures are mimicking  Friday’s performance, with another epic selloff that could see the US stock index flirt with the 1,900 level by the time the North American session gets underway.   The panicked selling and flight to safety has sparked an inflow of capital into the Japanese yen, while short-covering in EURUSD has seen the pair catapult almost 1% higher midway through the European session.   While the greenback is enduring outsized losses against both the euro and yen, it is making up for in gains against the commodity-linked currencies, with the aussie and loonie seeing an evaporation of bids as the hydrocarbon complex is plagued by an influx of selling pressure.

With little in the way of economic data to divert attention away from the monumental sell-off taking place in global equities this morning, it is important to take stock of the economic landscape and assess the implications for financial markets moving forward.   The most obvious reaction from the recent meltdown is that it lessens the probability the Fed raises rates at the upcoming September meeting.   While we would like to think the Federal Reserve isn’t at the mercy of equity markets, there appears to be enough fodder on an international basis materializing the Fed rationally has an out for delaying the tightening cycle at this juncture.   Though previously we had expected under normal market circumstances the Fed to be comfortable enough with the domestic and international landscape that September would provide a good launching pad for interest rate liftoff, the recent events increase the probability of delay, and by extension may help equities regain traction.

Though the DXY has traded sideways for the majority of 2015, the USD on a trade-weighted basis has reached its highest level in over a decade, acting as a headwind to both a quicker pace of inflation and GDP growth.   China, Mexico, and Canada make up close to 50% of the trade-weighted dollar gauge, with those three currencies sustaining substantial losses against the greenback in recent months.   The continued pressure on the US manufacturing sector as input costs increase from a relative value perspective will give the Fed cause for concern, along with the import prices putting downward pressure on the overall inflation profile.

Not helping the inflationary picture for the US economy is the fact that commodity prices have hit multi-year lows, likely to reignite disinflationary pressures as it doesn’t appear the trend for lower commodity prices is close to reaching a bottom.   While the price action and flow-through effects of commodity prices are usually seen by policymakers as transitory to the composition of the inflation profile, it is hard to argue the full impact of the commodity bear market has been felt by the economy.   In addition, rising shelter costs have been a large contributor to the stabilization of the “core” inflation measure that has been supportive of less accommodative monetary policy, though removing the increase of shelter costs from the core measure and inflation is running below 1% on a year-over-year basis.

Therefore, while there has yet to be any price action materialize that would suggest a bottom for the sell-off in equities is on the horizon, the shifting tectonic plates in both the currency and commodity space may give the Fed the excuse they are looking for to cautiously monitor international developments and delay the impending rate hike.   By proxy, the rate hike delay would support risk appetite and help the dollar-bloc currencies regain some of their lost footing, though the trick of catching the falling knife can be a hard one to execute in volatile markets.   Again, the two-way volatility in currency markets makes a successful navigation difficult when the traditional risk-on/risk-off trades don’t cohesively come together (e.g. higher euro but lower loonie), so make sure to speak with your dealing teams as to how to best put a plan in motion to use volatility to your advantage.

S&P Crashes After US Stocks Get Dumped – Mean Reversion Opportunity? 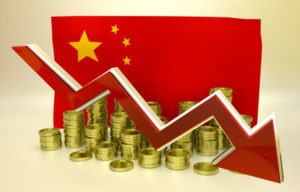 USDCAD Broke the Triangle, Advancing Towards a New High

The carnage in global stocks and commodities witnessed throughout the latter half of last week has shown no signs of abating, with the meltdown in financial markets picking up fresh momentum as we head into the beginning of the new trading week.   The lack of any supportive monetary policy actions from the People's Bank of China caused sentiment to take a fresh leg lower during the overnight Asian session, seeing investors capitulate in the face of the worse sell-off in equities since the Asian financial crisis and rotate out of high-yield assets in search of safety from further losses.…