Home » Coronavirus Chronicle: How the Pandemic Impacted the Forex Market

Coronavirus Chronicle: How the Pandemic Impacted the Forex Market

The novel coronavirus (COVID-19 ) which emerged in December 2019 has now killed more than 8,248 people and infected more than 205,452 people, according to data from Johns Hopkins University. Markets have been roiled amid record volatility, with the VIX exceeding the levels during the financial crisis of 2008. In this article we’ll explore how the pandemic has affected the global foreign exchange market so far.

To understand how the news has influenced the market it’s important to review the major coronavirus headlines that emerged since the beginning of the year.

January 20th: The first confirmed cases of the coronavirus outside mainland China in Japan, South Korea and Thailand are reported.

January 23rd: Wuhan is cut off by Chinese authorities as all air, road and train links out of the city are suspended.

January 30th: The World Health Organization (WHO) declares a global health emergency, as the outbreak continues to spread outside China.

February 7th: Li Wenliang, a Chinese doctor who tried to warn others about the deadly outbreak, dies from the coronavirus.

February 9th: The death toll in China surpasses the number killed worldwide by the 2002-3 SARS epidemic.

March 11th: President Trump announces a restriction of travel from 26 European countries to the United States.

March 12th: WHO declares the novel coronavirus outbreak a pandemic. 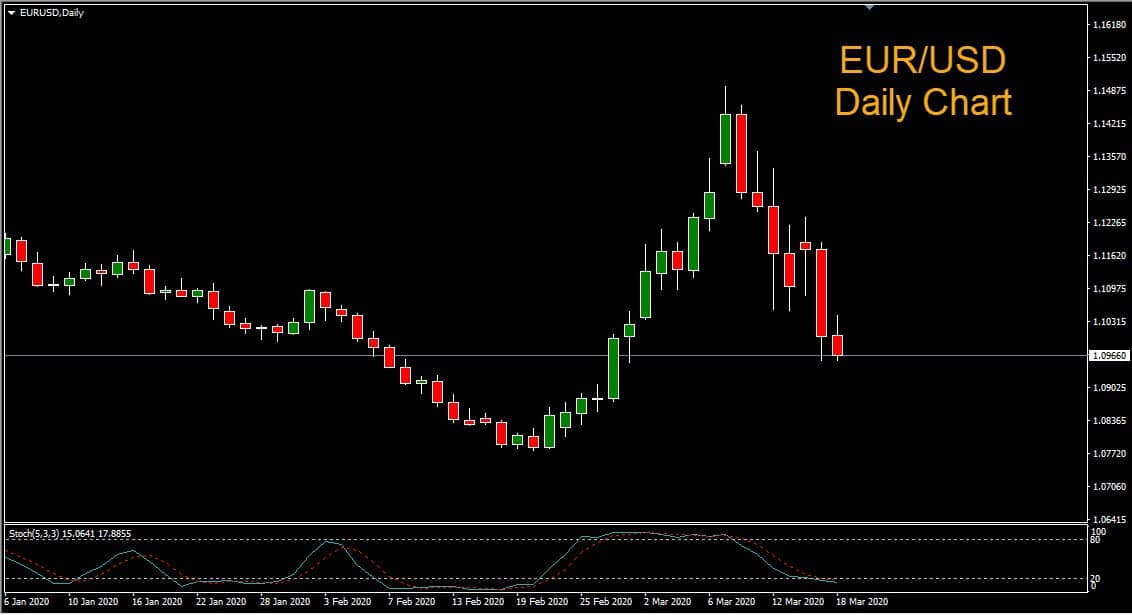 At the March 12th meeting, the European Central Bank (ECB) announced further stimulus to fight the economic impact of the coronavirus but disappointed markets by refraining from lowering interest rates. ECB president Christine Lagarde was criticised after refusing to assume the ‘whatever it takes’ stance of her predecessor Mario Draghi. The greenback has been favoured by investors due to its status as the world’s most liquid currency and its safe haven appeal. This demand for dollars is reflected in the sharp recent losses in EUR/USD. 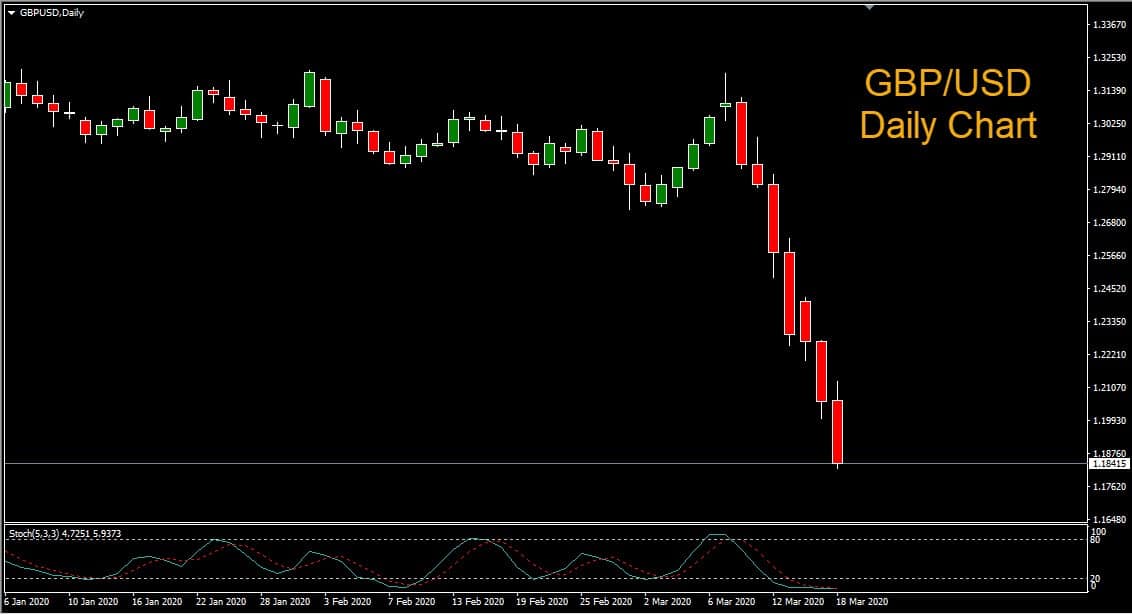 On Wednesday, GBP/USD entered its seventh consecutive day of losses and crashed as low as $1.1757 – its weakest level since 1985. The drop began last Wednesday, when the Bank of England slashed the base interest rate to 0.25%. Fears over the economic impact of the coronavirus are driving the selloff, while other factors such as by the UK’s current account deficit and Brexit uncertainties also weigh on sterling. 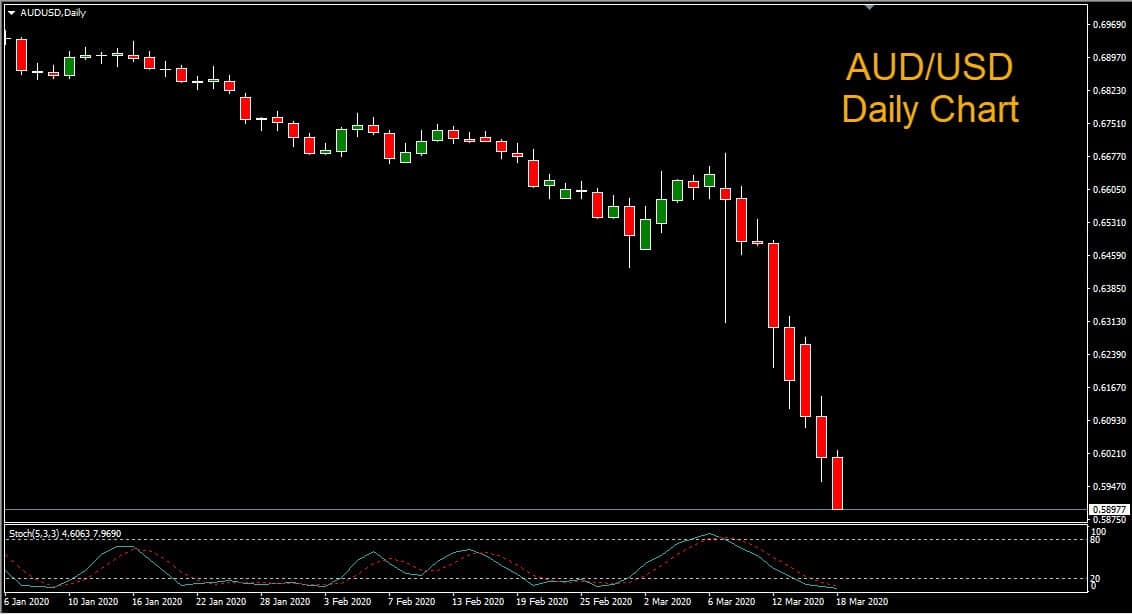 AUD/USD fell to 17-year lows on Wednesday as the probability of a recession in Australia rises and commodity prices fall. China is Australia’s largest trading partner and news relating to the Chinese economy has a major impact on the Australian dollar. Since the Chinese renminbi is restricted to trading within a designated range, investors often use the Aussie dollar as a proxy for China. More broadly, the Australian dollar is viewed as a ‘risk currency’ that investors tend to avoid in periods of instability. Further negative news about the coronavirus will likely pressure the beleaguered Australian dollar, while signs of containing it will provide support. 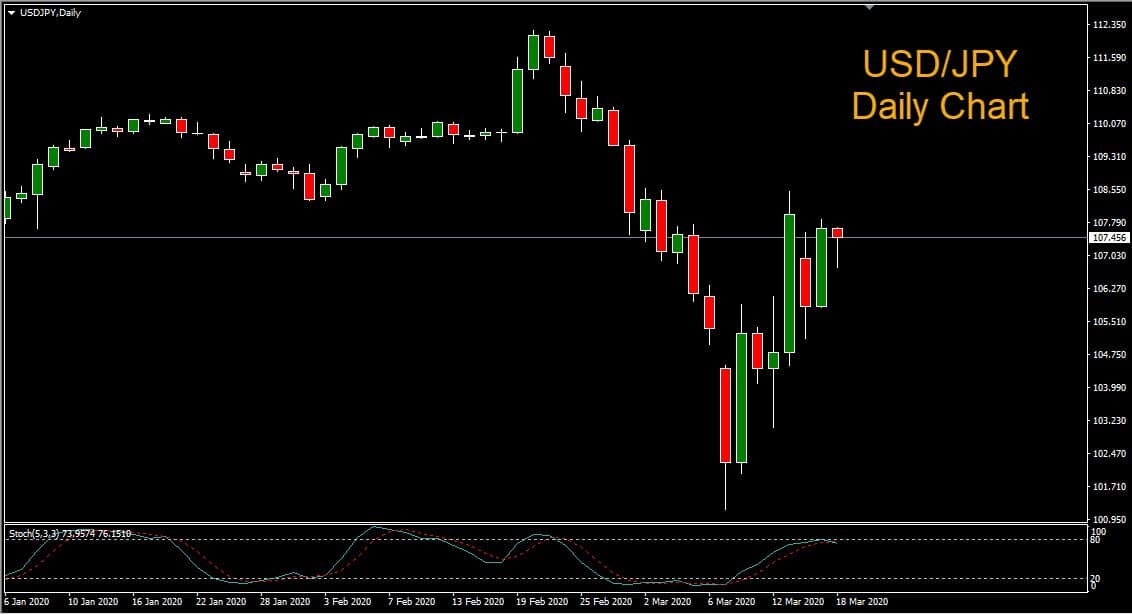 The Japanese yen is a leading financial safe haven, in part due to Japan’s status as the world’s largest creditor nation. Other safe haven assets include the Swiss franc, the US dollar and gold. Investors flocked to the yen as the severity of the coronavirus globally became apparent in late February. However, amid the recent savage selloff in equities the USD/JPY has since rebounded. 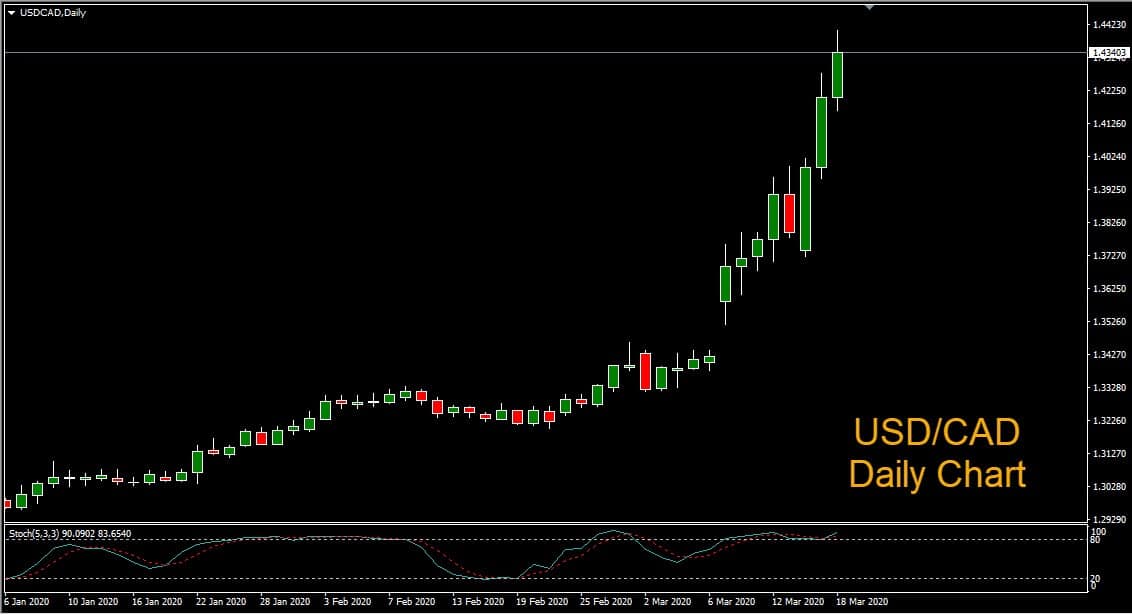 USD/CAD reached its highest levels since January of 2016 in Wednesday trading. The risk sensitive Canadian dollar plunged as crude oil prices cratered to below $24 – reaching the lowest levels since 2002. Oil prices suffered a historic collapse on March 9th, after Saudi Arabia pledged to aggressively boost production and cut prices, following Russia’s refusal to join an OPEC-led production cut. The Loonie has a positive correlation with crude oil because Canada is one of the largest oil producing countries in the world. A global economic slowdown due to the coronavirus naturally impacts demand for crude oil, pressuring prices and in turn weighing on the Canadian dollar.

Global equities have fallen into a bear market. On Monday, the Dow Jones Industrial Average and S&P 500 posted their largest percentage drops since the October 1987 crash. As the level of anxiety in the market reaches a fever pitch, investors are currently flocking to the US dollar, despite a series of actions from the Federal Reserve that would normally weaken the currency. 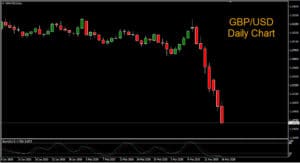 The novel coronavirus (COVID-19 ) which emerged in December 2019 has now killed more than 8,248 people and infected more than 205,452 people, according to data from Johns Hopkins University. Markets have been roiled amid record volatility, with the VIX exceeding the levels during the financial crisis of 2008. In this article we'll explore how the pandemic has affected the global foreign exchange market so far. To understand how the news has influenced the market it's important to review the major coronavirus headlines that emerged since the beginning of the year.   January 11th: Wuhan health authorities reported the first…