Latest
You are at:Home»Forex News»Crunch time for Brexit in parliament – GBP/USD on the move

“White smoke in Berlaymont” was one of the tweets announcing a Brexit deal – sending sterling surging – until “black smoke” came out of Belfast. Prime Minister Boris Johnson signed off on a deal with his European counterparts without receiving the blessing of the Northern Irish Democratic Unionist Party (DUP). The pound retreated from the highs near 1.30 and now trades at the 1.28 handle.

What is in the deal

The accord officially keeps Northern Ireland (NI) in the UK’s customs union but de-facto in the EU’s orbit, allowing an open border on the Emerald Isle – essential to keeping the peace. Some of the goods moving from NI to the rest of the UK will be subject to customs. The DUP objects having this customs border in the Irish Sea. The party led by Arlene Foster also opposes the new consent mechanisms for changing these arrangements – which strips unionists of their veto.

For the rest of the UK, it means a cleaner or harder Brexit – depending on one’s point of view. Economic estimates pint to a deeper economic loss under Johnson’s deal in comparison to the one reached by his predecessor Theresa May. Markets are shrugging off the impact of Brexit and focus on certainty – a hard Brexit is better than the risk of a no-deal Brexit.

All eyes on the vote

All eyes are on the vote on Saturday – the first weekend sitting since the early 1980s. While markets are closed at the time of the vote, statements from MPs and speculation about the outcome are set to rock the highly-volatile pound.

Where do things stand?

The Labour party opposes the accord as it would allow Conservative governments to abandon protections for workers and the environment. The Liberal Democrats and the Scottish National Party (SNP) are staunchly pro-Remain. The SNP dislikes what it sees as a preferential treatment to NI that voted to remain in comparison to Scotland, which also did so but is left out.

The small party has 10 MPs that are crucial to passing the Brexit accord in parliament – and influencing hardline members of Johnson’s Conservative Party to support it. Most Brexiteers, including the ardent “Spartans”, have pledged support, but it may be insufficient. The PM would need the backing of several opposition Labour MPs from Leave-voting constituencies – and their statements today are crucial.

At the time of writing, the vote is set to be close, with a marginally higher chance that MPs vote it down. In that case, an extension and snap elections are the most likely outcome. There are additional scenarios with various outcomes for the pound.

UK Retail sales came out flat in September, as expected, but on top of downward revisions for August. In the US, housing figures were mixed, and industrial output fell below expectations but on top of an upward revision.

Federal Reserve officials kept investors speculating if the central bank will cut rates later this month. Richard Clarida, the Fed Vice-Chair will be the last speaker before the bank’s quiet period. 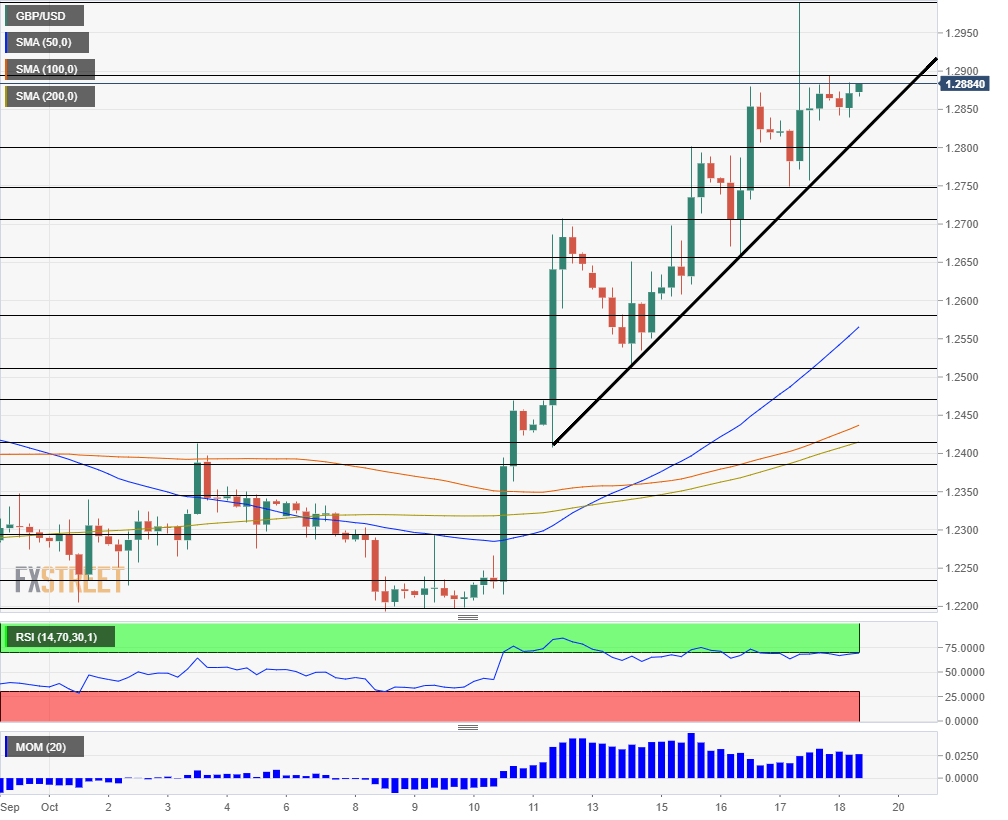 GBP/USD has been trading along a steep upward trendline since mid-October – a bullish sign. The pair trades well above the 50, 100, and 200 Simple Moving Averages and momentum remains to the upside. At the time of writing, the Relative Strength Index (RSI) is just below 70 – thus outside overbought conditions.

Get the 5 most predictable currency pairs
Previous ArticleChina: After 6% GDP growth in 3Q, we raise our 4Q forecast – ING
Next Article EUR/USD still influenced by Brexit, also eyeing Fed speakers