Latest
You are at:Home»Opinions»Dollar may rise and fall now that Trump’s approval rating hits multi-year highs

Making the dollar great again? Paraphrasing President Donald Trump’s 2016 election campaign, the greenback has room to rise alongside the president’s approval rating. However, the occupant of the White House may also push it back down.

According to FiveThirtyEight, Trump’s approval rating is standing at 43.9% while more people disapprove of his performance – 51.8% according to the website – the highest since just after his inauguration in early 2017. 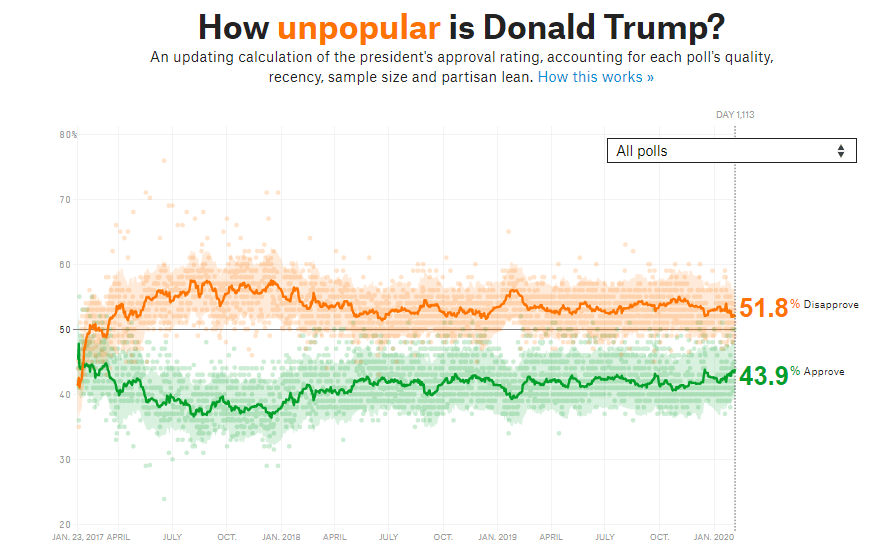 Here are three reasons for the growing support:

Trump is enjoying a trio of positive developments. The Senate acquitted him of any wrongdoing in his attempts to extract damaging information on potential rival Joe Biden from Ukraine. While a handful of Republican Senators acknowledged that Trump withheld vital military aid to the Eastern European country for political reasons, only one voted to oust him – and only one charge.

The upper house was never going to remove Trump from office – as a two-thirds majority was required – but the almost uniform backing by his party is a welcome development for the president. Rallying the Republican base – rather than winning the center – was Trump’s strategy in 2016, and that may happen again in 2020.

And while Republicans are united around their standard-bearer, the Democratic Party looks lost. The Iowa caucuses ended in a farce that delayed the publication of the results. Moreover, there was no clear winner in the first state that hold primaries – the Associated Press said that it is too close to call. Centrist Pete Buttigieg and Left-leaning Bernie Sanders were in the lead.

Trump reveled in the uncomfortable state of his opponents that continue their long primary season. Even before the race had begun, the opposition had no clear leader such as former president Barrack Obama to rally the masses.

The US Unemployment Rate remains around 50-year lows around 3.5-3.6% while the labor market continues adding jobs. Inflation is under control despite an extended holiday shopping spree. And while Gross Domestic Product growth has returned to around 2%, America outperforms its rivals.

In various surveys, Americans give Trump better notes on the economy than on other topics. The president is taking advantage of this by touting and claiming these achievements to himself. That seems to work – for enough citizens to back him.

Potential dollar impact – up and then down

Markets prefer business-friendly Republicans over Democrats. While Trump is not a normal center-right politician but rather a populist, investors cheer his 2017 tax cuts and deregulation.

Trump has been pushing the dollar higher in another way. His trade wars with China – that seem settled until the elections – have triggered safe-haven flows into the dollar. The recent increase in the greenback’s value is also the result of the coronavirus outbreak, which adds to the flight to safety.

Overall, the currency has strengthened and has room to extend its gains if Trump’s reelection chances continue rising.

However, the strong dollar irritates Donald Trump. He sees any appreciation of the greenback – and the accompanying decline of other currencies – as a competitive disadvantage for the US. The president has repeatedly been bashing the Federal Reserve, first for raising rates, and then for not cutting them at the speed and depth that he wanted.

Apart from complaining about the exchange rate and criticizing Jerome Powell – the Fed Chair that he appointed – Trump may move to change the central bank and fill it with his loyalists. That may happen even before the elections and tilt the Federal Open Markets Committee in favor of weakening the dollar.

Overall, President Trump has significant influence over the dollar, and his growing support may push the greenback higher. However, he may actively move to send the currency lower or “keeping the dollar down” – a paraphrase on his 2020 election campaign.

Get the 5 most predictable currency pairs
Previous ArticleLagarde speech: Inflation remains some distance below our medium-term aim
Next Article EUR/JPY reverses a dip to 3-month lows, finds support ahead of mid-119.00s