Mario Draghi sticks to the baseline scenario of recovery in the second part of the year, and doesn’t really hint about any move. The president of the ECB meets the press in Barcelona after the ECB left rates on hold as expected.

Reporters got interesting answers out of Draghi. Live blog of the press conference.

Draghi refused to comment on upcoming elections in France and Greece on Sunday. He might be waiting for the results, as the tables might turn in the European Spring.

12:00 GMT EUR/USD trading around 1.3130. It has been depressed under 1.3212 after falling from downtrend resistance yesterday. All times are GMT.

12:03 At the same time when the press conference begins, 12:30 GMT, the US will release its weekly jobless claims. A drop from high levels of around 388K is expected.

12:23 This is a big week for euro/dollar: tomorrow’s NFP will close the trading week, and then we have elections in France and Greece, which will rock the euro on Monday.

12:28 Heavy security presence is seen in Barcelona around the meeting of the ECB. Spain is now in the limelight of the debt crisis and many people from Spain and from other countries are angry about the situation, to say the least.

12:32 Rates unchanged. Inflation likely to remain above 2% in 2012 and prices are expected to remain unchanged.

12:35 Debt crisis dampens growth, and have a potential of spillover.

12:36 Inflation is likely to remain high due to energy prices and rises in indirect taxes. Looking at commodity futures, prices should falls. We will monitor secondary effects: wages, etc.

12:38 Broad stabilization of financial situation and avoidance of credit crunch.

12:40 Draghi talks about LTRO II, which was completed only towards the end of Q1.

12:41 Fiscal adjustment weighing on near term growth, but will contribute to lower risk premium in the future.

12:42 Growth needs to be pushed through reforms. EUR/USD rises to 1.3135. Reforms are especially important in countries that lost competitiveness.

12:43 Regional divergences are a normal feature within currency unions. Debt has been accumulated and is being corrected. ECB is focused on the euro-area. Price stability is the mandate of the ECB and is the best contribution. National governments are responsible for  adjusting  imbalances. Progress is being made, but more needs to be done.

12:44 Questions begin: Was there a discussion about interest rates? Answer: No. EUR/USD continues higher to 1.3155.

12:45 Q: No mor upside risk in inflation? Answer: I can repeat the statement. Broadly balanced.

12:46  Q: Where is the reward for the austerity for Spaniards? Answer: Spain did a lot in a short time. We have to acknowledge this. LTRO prevented a major credit crunch. We will see when this money reaches the real economy.

12:49 Q: Austerity isn’t working, unemployment is at a peak. Hollande is calling for change. Is he right? A: No comment on politician’s statement. Yet we need a growth compact. No contradiction between fiscal compact and growth compact.

12:51 What is a growth compact, asks Draghi, and answers: 1) Continuation of structural reforms in all the economy and are different for different countries: product sector reform, complete the single market, increase competition.

12:53 Draghi: There are distortions in the labor market causing youth unemployment. We need a common European discipline for reforms.

12:54 More infrastructure projects, better to cut in spending than taxes, and not to cut investment.

12:55 If we want a fiscal union, we need a path and the starting point is not a transfer union. Some central control is needed.

12:57 Real interest rates is negative in most countries, liquidity is abundant but exit strategy is still premature.

13:02 Q: Is Italy on the right path? Answer: I can’t guess what politicians will do.

13:03 We need to work together and define a path, like building the euro.

13:05 Q: How does stimulus money reach the economy? A: We can learn from the 80s. We learned that structural reforms are necessary.

13:06 There are many measures that encourage job growth. Unfortunately, countries found themselves in extreme situations where they increased taxes instead of doing the right things.

13:07 Q: What happens now? Years of recession? A: It depends on governments. Some things are already done. We have to give a sense that we are working together. There are huge divergences: between full employment and recession. The indications we had in April are not enough to change the baseline scenario that a gradual recovery will be seen in the second part of the year.

13:12 Q: Do you think that the financial reform in Spain is the right thing to recover confidence in the Spanish banks? A: We have full confidence that all reforms will be undertaken. The track record of Spain is good.

13:14 Q: More LTRO? A: Can’t pre-commit. We still need to fully understand the full effect. A) We avoided a major credit crunch, at least better than today. B) Supply of credit is much less tight after LTROs. Tightness is going down. C) Relatively new: a strengthening of the deposit base in the countries that are in the greatest difficulty. D) M3 growth pace has recovered. E) A significant drop in the key spreads, repo rates and others.

13:20  Q: What did you discuss? A: We found the policy accommodative and that an exit strategy is premature.

13:21 In June, the ECB will discuss full allotment.

13:22 Bad experience with EFSF: it fell short because it was created in a way that it could hardly work. We hope that the ESM will work better.

13:25 At the current high taxation, its better to cut spending and not add more taxes.

13:27 We saw a stabilization in the first three months. Most recent data shows that uncertainty prevailing. We will be smarter next month.

13:28 A fresh poll shows that Sarkozy is partially closing the gap on Hollande, 52%:48%. This might be boosting the euro as well.

13:29 Draghi: I can understand poor, jobless, young people. We will try to do our job in the best way.

Purchasing managers’ indices have shown that things are bad: manufacturing is at a 33 month low in Germany, and the situation in Spain and Italy doesn’t look good.

In addition, the Spanish banking system is struggling, as it is now suffering from losses in Spanish bonds – bonds that the ECB encouraged buying through the LTRO. This joins their legacy losses on the housing market.

As the ECB doesn’t usually act without hinting, Draghi could hint about a rate cut in June.

Eventually he didn’t do it. 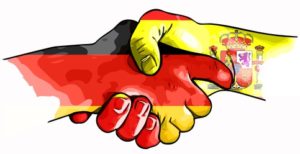 ISM Non-Manufacturing PMI Disappoints and Drops to to 53.5

Mario Draghi sticks to the baseline scenario of recovery in the second part of the year, and doesn't really hint about any move. The president of the ECB meets the press in Barcelona after the ECB left rates on hold as expected.   Reporters got interesting answers out of Draghi. Live blog of the press conference. Highlights: No discussion about interest rates. Monetary expansion is subdued. Baseline scenario of recovery in H2 remains unchanged: no rate cut. Inflation risks are balanced: inflation due to energy prices: will remain above 2% in 2012 and will fall later on. Exit strategy still…