The European Central Bank is missing its single inflation target of “2% or a bit below” on headline inflation in the past two years. The Frankfurt based institution has already taken the historic step of setting a negative deposit rate in June 2014 and further lowering it to -0.20% in September 2014.

Stubbornly low inflation, due to falling oil prices and to a slow weakening of the exchange rate have led the ECB to forge ahead with a Quantitative Easing (QE) program of its own, playing catch-up with its peers in the US, the UK and Japan. The plan, announced in January 2015 and implemented since March runs at a scale of â‚¬60 billion per month and is officially intended to end in September 2016, reaching a total scale of â‚¬1.14 trillion.

This slew of measures has led to a significant depreciation of the common currency against other currencies: 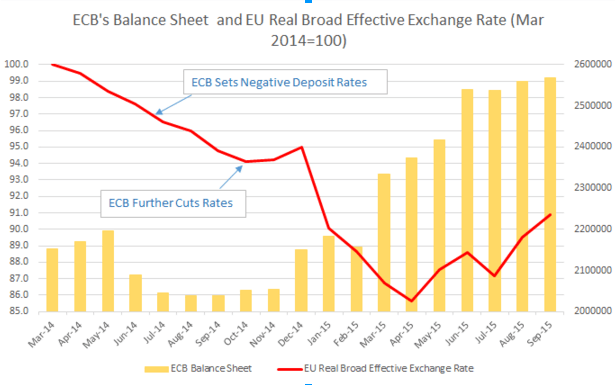 While the program is running smoothly and has already eased credit conditions in the euro-area (as seen by positive turnaround in private loans for example), current inflation is at a negative -0.1%.  Also core inflation, not the ECB’s target, stands at a meagre 0.9% y/y. In addition, future inflation forecasts have been lowered by the Bank’s staff to 1.1% in 2016 and 1.7% in 2017 as of September.

In its October 22nd meeting, ECB President Mario Draghi surprised markets by going well beyond expectations for extending the QE program beyond September 2016. He provided thick hints of not only extending the program but also expanding the monthly purchases above the current run of â‚¬60 billion – a bigger step as it implies front-loading purchases.

The Italian central banker went further with allowing for a further cut of the deposit rate, despite having stated that rates have already their lower bound. In addition, his use of the word “vigilant” reminded market participants of similar words by his predecessor Trichet, words which meant imminent action.

Together with expressing explicit concern about the exchange rate, his performance triggered a sell-off of the euro and European bonds shot higher.

Positioning towards the event

Draghi and the markets

The big question towards December is: Has Draghi created sky high expectations that would lead to a disappointment and thus a reversal of these moves?

In his early days as ECB President, Draghi has had to work harder to convince his fellow colleagues to act, but it seems as he has greater authority than beforehand, so German opposition to monetary loosening will likely be quelled.

More importantly, Draghi has also mastered markets. Early in January, news organizations were reporting about a QE program worth around â‚¬40-50 billion and reaching a total size of â‚¬500-750 billion. He then revealed a larger program in terms of buys and total scale, beating expectations that he contributed to creating. This led to a massive bond rally and a further depreciation of the euro.

History may certainly rhyme this time with Draghi over-delivering on his own  promises.

Looking across the Atlantic

The actual scale of his measures depends on how the US Federal Reserve shapes expectations towards a its own rate decision on December 16th. The decision by the central bank of world’s largest economy has an impact not only on the exchange rate of the euro versus the dollar, but also of the Chinese yuan against the common currency as the dollar and the yuan trade in tandem. Germany, where the ECB is headquartered, depends on exports to China.

Expectations towards a rate hike in the US will probably strengthen the greenback (and the yuan) against the euro and theoretically allow the ECB to keep its powder dry. However, with the intensifying currency wars around the world, standing still means falling backwards, and Draghi would certainly like to keep the euro pressured. 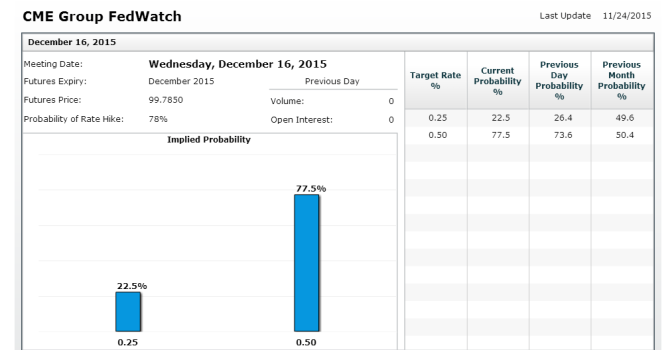 The chart above shows the implied probability of a rate hike by the Fed in December: only around 36%. 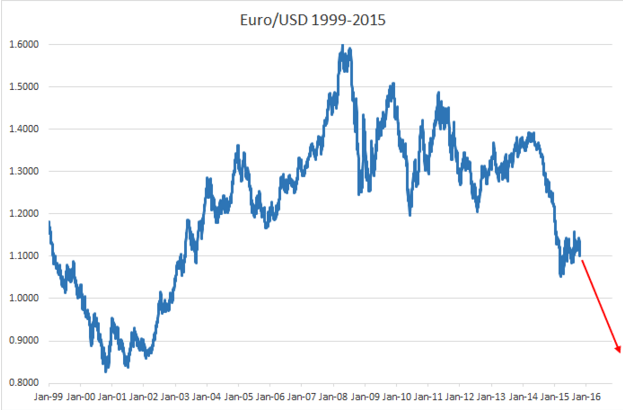 The reasoning for selling the currency pair lie in the aforementioned ability of Draghi to overdeliver. In addition, the ECB would certainly like to see a weaker exchange rate to support exports and more importantly push inflation higher and avoid a vicious deflationary cycle that may be beginning to take hold.

There is a good chance of seeing a drop of 200-300 pips in the currency pair in the immediate aftermath as well as an extension of the move running through the end of 2015.

The low of the year at 1.0460 could be breached, allowing the pair a challenge of parity, eyed by many analysts. 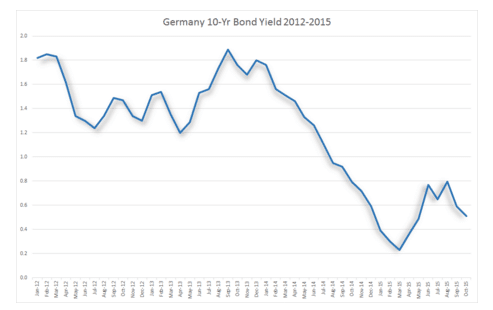 German bunds may seem to many as expensive, yet these notes provide a long opportunity due to the following reasons: 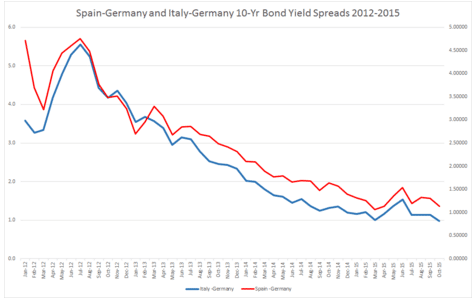 The ECB December 3rd decision is a very significant event for markets and certainly provides opportunities. President Draghi is expected to exceed expectations. We suggest going short EUR/USD and long German bunds into the event.

The sound version:  we  explain  how to trade the euro printing machine:

ECB December Decision – All the updates

Key Points The ECB is expected to announce massive monetary easing on December 3rd. ECB President Mario Draghi has already under-promised and under-delivered EUR/USD has potential of a significant fall regardless of Fed hike expectations German bunds still have value despite elevated prices Background The European Central Bank is missing its single inflation target of "2% or a bit below" on headline inflation in the past two years. The Frankfurt based institution has already taken the historic step of setting a negative deposit rate in June 2014 and further lowering it to -0.20% in September 2014. Stubbornly low inflation, due…