Satoshi Nakamoto, alias of Bitcoin’s creator or creators, utilized a Proof of Work (PoW) consensus mechanism to build Bitcoin’s blockchain. Many other cryptocurrencies have used the same algorithm to develop their own blockchains, including Ethereum. However, recently, Vitalik Buterin, the creator of Ethereum, and other developers have shifted their views in favor of a Proof of Stake (PoS) algorithm. There are several benefits that PoS offers show in the latest post by Buterin.

The argument in favor of Proof of Stake

Ethereum 2.0 (Eth2) is the most significant upgrade to the Ethereum network, which was planned to be launched in early 2020 but was postponed several times, currently set to happen in December. The upgrade is set to replace the network’s mechanism of consensus PoW with PoS.

One of the main advantages of the PoS mechanism is security. According to the calculations done by Vitalik Buterin, the total cost of an attack on a GPU-based PoW is around $0.26 (6-hour attack). An ASIC-based PoW would need $486.75 for the same attack, while PoS would require at least $2,189.

In the long run, this cost is expected to go even higher, as staking becomes more efficient, and people become comfortable with lower rates of return. I personally expect this number to eventually rise to something like $10000.

Additionally, Buterin also discusses the fact that if an attacker can perform a 51% attack successfully in a PoW system, there is not much one can do to stop it. The only response in practice has been ‘wait it out until the attacker gets bored.’

Additionally, proof of stake is more censorship resistant. GPU mining and ASIC mining are both very easy to detect: they require huge amounts of electricity consumption, expensive hardware purchases and large warehouses. PoS staking, on the other hand, can be done on an unassuming laptop and even over a VPN.

After a significant breakout from an ascending triangle on October 21, the price of Ethereum pulled back to re-test the lower boundary of the pattern, successfully defending it from October 30 until November 4. 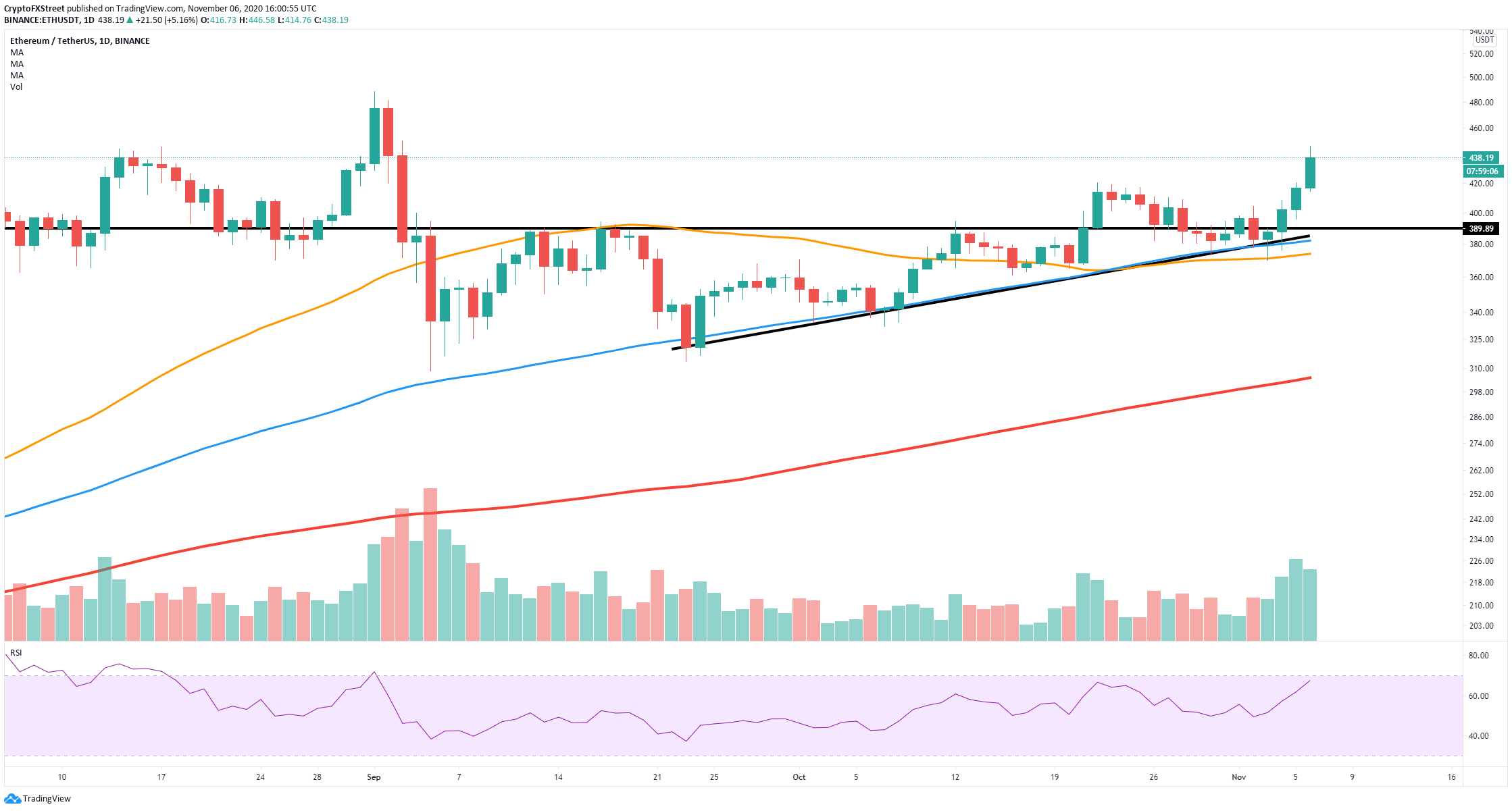 The In/Out of the Money Around Price (IOMAP) tool shows practically no resistance until $503 in contrast to support levels that could be seen more clearly. The area between $384 and $397, where 2.03 million addresses purchased 13.32 million ETH, represents a robust support zone. The newest announcement from Vitalik Buterin states that eth2 initial deployment will be ready by December 2020, which is adding a lot of buying pressure to Ethereum.

On the other hand, the daily RSI is on the verge of overextension, indicating that ETH’s price is looking for a correction in the short-term like it happened on September 1 when the digital asset dropped from $488 to $308 in just four days. The next bearish price target would be the horizontal support level at $390, which coincides with support provided by the IOMAP model.

Vitalik Buterin, the creator of Ethereum, has released a post explaining the benefits of PoS. Buterin states that there are three key reasons why PoS is superior to PoW. Satoshi Nakamoto, alias of Bitcoin's creator or creators, utilized a Proof of Work (PoW) consensus mechanism to build Bitcoin's blockchain. Many other cryptocurrencies have used the same algorithm to develop their own blockchains, including Ethereum. However, recently, Vitalik Buterin, the creator of Ethereum, and other developers have shifted their views in favor of a Proof of Stake (PoS) algorithm. There are several benefits that PoS offers show in the latest post by…