Home » EUR/USD: 3 downers send it to the lowest since November

EUR/USD: 3 downers send it to the lowest since November

The EUR/USD is holding onto 1.1700, but only just. The pair has another down day, and the current trading levels are the lowest since November 14th, a 6-month low. The December low of 1.1717 is now apparently broken.

What is behind the fall? Here are three reasons

The preliminary purchasing managers’ indices for May came out  mostly below expectations. Markit’s Flash French Manufacturing PMI came out at 55.1, above 53.7 expected, but that was the only piece of good news. The Services PMI came out at 54.3, way below 57.2 expected.

The figures for Germany, the continent’s largest economy, were even worse: 56.8 points in manufacturing, below 57.8 forecast, and 52.1 on services, under 53 projected. The euro-zone Composite PMI came out at 54.1, a drop of one point, and summing it up nicely.

The forward-looking indices are still pointing to growth, but to a steadily decelerating type of growth.

There is still no new government in Italy. President Sergio Matarrela  will decide today or tomorrow if he approves Giuseppe Conte as the new Prime Minister. The candidate has no political experience and is suspect of lying in his CV. Another option is the 5-Star leader Luigi di Maio, also a concern for markets.

The 5-Star-League coalition is  causing jitters in Europe. Their program includes cutting taxes and increasing spending, thus enlarging the deficit. Italy already has a 132% debt-to-GDP ratio. Early suggestions to write off â‚¬250 billion of debt were scrapped, but a populist government in the eurozone’s  third-largest economy is a considerable concern.

The US President raised doubts that the planned Summit with his North Korean counterpart Kim Jong-un will indeed happen. The peace process in the Korean peninsula is in trouble after the North cancelled a meeting due to a military drill held by the South and the US.

In addition,  Trump’s attitude towards China has also cooled. Over the weekend, the world’s largest economies decided to put the trade war on hold. However, there is still a long way to go.

These twin concerns weigh on stock markets worldwide and the broader risk-off sentiment sends flows into the safe-haven Japanese Yen first and foremost. The second beneficiary is the US Dolla. All the rest, including the Euro, are losing out.

All in all, this is a perfect storm against the EUR/USD 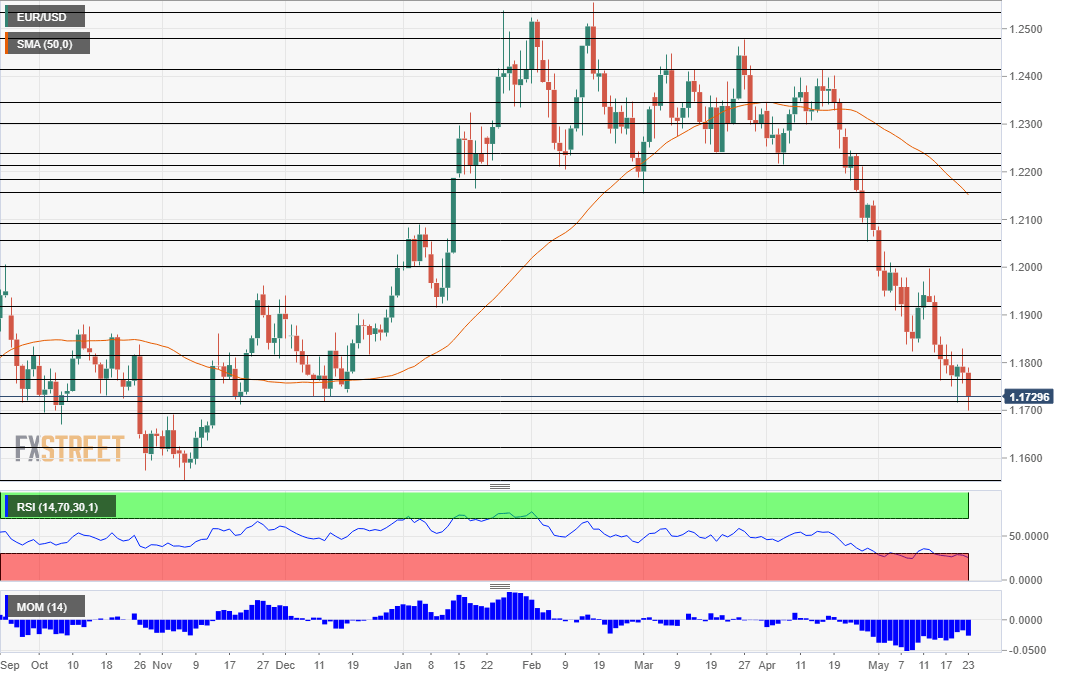 The RSI is below 30, but too deep. These oversold conditions are not of a concern to the pair. Momentum remains to the downside and the pair is also below the 50 and 200 day Simple Moving Averages. A quick look on the chart undoubtedly shows that the trend is to the downside.

1.1717, which was the low point in December 2017, is now a battle line. 1.1695 capped the pair back in early November and is the next line to watch. 1.1625 was a temporary resistance line also in November but substantial support is only at the lows of that period around 1.1550.

More:  EUR/USD cliff is close, could be a free-fall if it breaks “” Confluence Detector 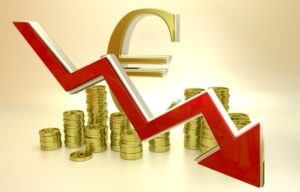 The EUR/USD experiences yet another down day, falling to the lowest levels since November.   Everything is going against the Euro in a perfect storm. The technical picture remains gloomy and oversold conditions do not seem to bother the pair. The EUR/USD is holding onto 1.1700, but only just. The pair has another down day, and the current trading levels are the lowest since November 14th, a 6-month low. The December low of 1.1717 is now apparently broken. What is behind the fall? Here are three reasons 1) Weak PMI data The preliminary purchasing managers' indices for May came out…