Latest
You are at:Home»Forex News»EUR/USD advancing ahead of four critical events

Super Wednesday is here, and EUR/USD is already on the move – hitting a new weekly high above 1.1120. Is it justified? The world’s most popular currency pair – like central banks – is data-dependent.

The four critical events to watch are:

Germany’s 16 states publish preliminary Consumer Price Index (CPI) figures for October throughout the European morning. And a slowdown is on the cards. The continent’s largest economy’s manufacturing downturn has likely pushed inflation lower. The all-German numbers are scheduled for 13:00 GMT.

The figures feed into the euro-zone flash CPI estimate due on Thursday and tend to change expectations. Moreover, the statistics will likely top Christine Lagarde’s intray as she becomes President of the European Central Bank on Friday.

The ECB has “one needle in its compass” – inflation at or close to 2%. However, the annual inflation is at around half the desired pace. Any deviation is set to rock the euro.

See US ADP Employment Preview: This trend is not your friend

Traders will have only 15 minutes to digest ADP’s numbers before the US publishes its first estimate of Gross Domestic Product for the third quarter. Also here, a slowdown is on the cards – 1.7% annualized growth against 2% in the second quarter.

The initial GDP figures tend to trigger high volatility, and surprises are common. Apart from the headline, traders will want to see if the consumer continues carrying the economy on its shoulders, or if investment and manufacturing have recovered.

The Conference Board’s Consumer Confidence gauge for October showed a drop in sentiment, albeit from high levels.

See US Third Quarter GDP Preview: How slow is slow?

The Federal Reserve is set to cut interest rates for the third time in a row but may hint a pause. Economic figures have been mixed, with the deceleration in job growth but a pickup in inflation – naming only a few of the contradictory signs. Officials at the central banks have seemed reluctant to act again.

Jerome Powell, Chair of the Federal Reserve, may struggle to convey a clear message at the press conference. He may also opt to open the door to more rate reductions or shock markets by leaving rates unchanged.

Uncertainty is also the realm of US-Sino trade talks. The media has been publishing conflicting messages about the chances of signing a partial deal. Presidents Donald Trump and Xi Jinping are set to meet at the APEC Summit in Chile on November 17.

The EU has formalized the Brexit extension, setting the exit date to January 31, 2020. The UK parliament approved elections on December 12, meaning that EUR/USD may shrug off British news for several weeks. 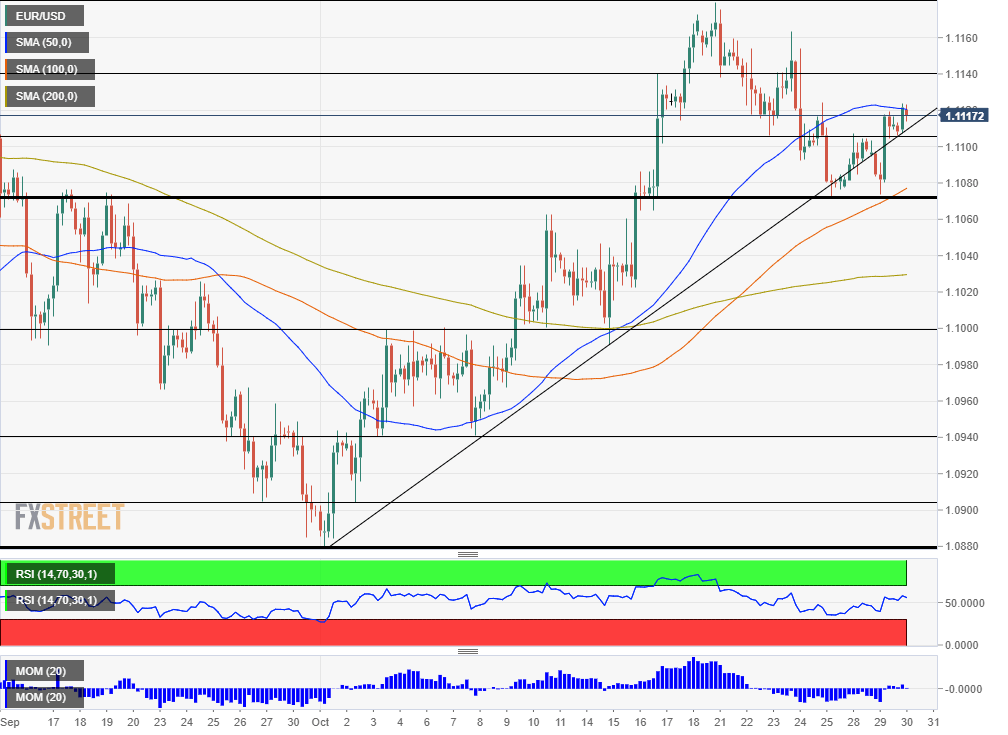 EUR/USD has been advancing but seems capped at the 50 Simple Moving Average on the four-hour chart, which hits the price around 1.1120 at the time of writing. It has recaptured the broken uptrend support line and trades above the 100 and 200 SMAs. Momentum is flat, and the Relative Strength Index is going nowhere fast.

All in all, the picture is balanced.