Latest
You are at:Home»Forex News»EUR/USD: Climbing over $1.2000 does not consist of a real recovery

The EUR/USD is off the lows of $1.1982 seen on Tuesday and has recaptured the round $1.2000 figure. The US Dollar is paring its gains after storming the board on Tuesday. The greenback extended its gains as bond yields remained elevated and the moves were exacerbated by thin liquidity. Most European countries enjoyed the Labor Day holiday, and several other financial centers were closed for the day. The US ISM Manufacturing PMI slightly missed expectations, but that was only a bump in the road for the US Dollar.

As Asian and European traders are back to work, we see a limited reversal of the move. However, the pair faces big tests ahead. Euro-zone manufacturing PMI data will keep markets busy in the wake of the day, but the more important data is due at 9:00: the euro-zone GDP report. The figures pointing to a slowdown in the first quarter of the year are expected to be summed up in a quarterly growth rate of 0.4% after 0.6% in Q4 2017. Significant surprises are unlikely as several countries have already posted their GDP prints.

The highlight of the early American morning is the ADP Non-Farm Payrolls. A within-average gain of 200,000 is expected in April after a robust rise of 241,000 in March, before revisions. It is important to note that the previous month’s figure was not indicative of the official Non-Farm Payrolls report. Nevertheless, it is expected to have an impact on markets.

And the best is kept for last. The Federal Reserve is expected to leave the interest rate unchanged when it publishes the statement at 18:00 GMT. However, recent upbeat figures, especially from the weaker inflation link, are expected to keep officials happy and to result in a bullish statement that will cement a rate hike in the following meeting in June.

See: Fed May decision: Dotting the i’s and crossing the t’s for the June hike

At some point, the US Dollar will make a significant downside correction that may be triggered by the wrong reason and could catch traders by surprise. The current upside move seems to be more limited. 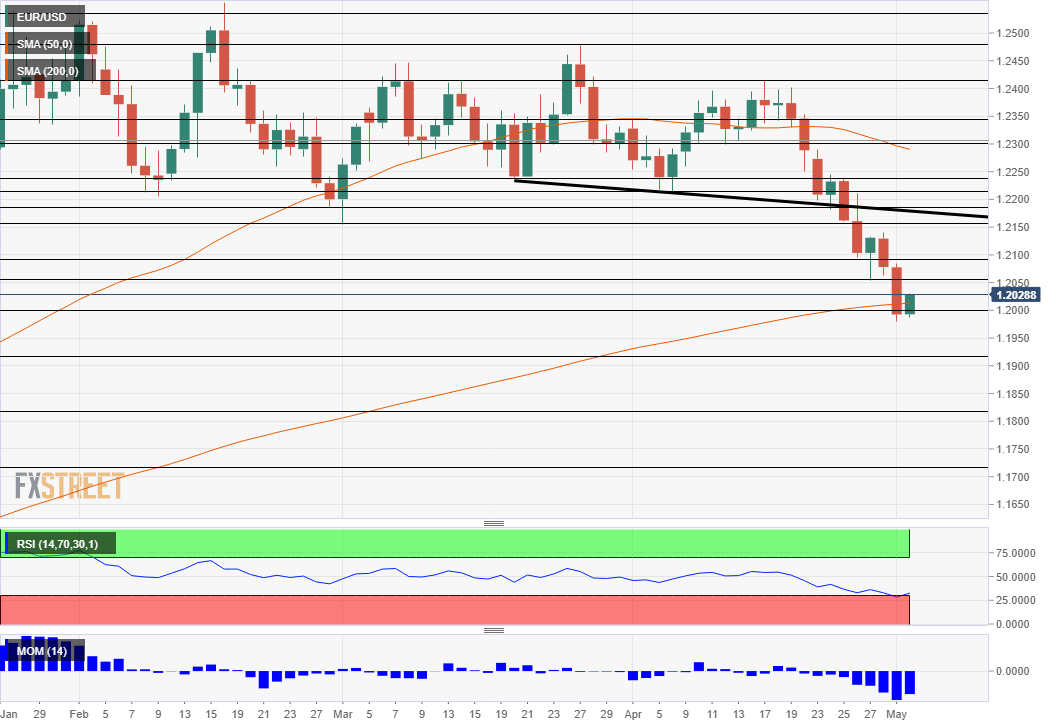 The RSI is struggling around 30, pointing to oversold conditions. Another struggle is with the closely watched 200-day Simple Moving Average. The pair is attempting to recover above this level which stands at $1.2013. Momentum remains decidedly down.

Get the 5 most predictable currency pairs
Previous ArticleEUR/USD: 8 Resasons For Staying Short EUR/USD Targeting 1.15 – BofAML
Next Article Dead cat bounces do not bode well for EUR/USD