Latest
You are at:Home»Forex News»EUR/USD falls back to reality as the mood sours

EUR/USD is trading around 1.1400, losing all its gains and falling to negative territory. The correlation between a risk-averse mood in markets and a stronger dollar may be returning after a post-Fed break.

The Fed raised rates and only slightly downgraded its interest rate projections for 2019: two instead of three hikes. Chair Powell also said that the reduction of the balance sheet would continue on auto-pilot, something that hurt stocks. Alongside some optimism, the US Dollar initially saw it as a hawkish hike and advanced while shares fell.

And then the narrative changed: while shares continued suffering on the balance sheet reduction, the USD dropped on the dovish hike.

And now we’re back to the classic risk-off narrative: the greenback rises when the mood is damp. “Do they know it’s Christmas time?” went the 1980s song for the Live Aid concert. Close to Christmas 2018, the answer for EUR/USD is a resounding No.

The USD rises despite a downgrade of US GDP to 3.4% and a miss on Core Durable Goods Orders, by 0.3% against a projected increase.

And a new story now makes a comeback: a potential US government shutdown. US President Donald Trump insists on funding for the Border Wall on the Mexican border after Republicans and Democrats had already agreed on a deal to avert the closure of the Federal Government without such funding. The President is upping the rhetoric on Twitter.

The political developments weigh on sentiment and boost the greenback.

However, it is important to remember that volatility has significantly increased in recent days and not only due to changing narratives around the Fed. Thin liquidity ahead of the holiday season also weighs.

While the week, month, and year draw to a close, the volatility will likely continue. 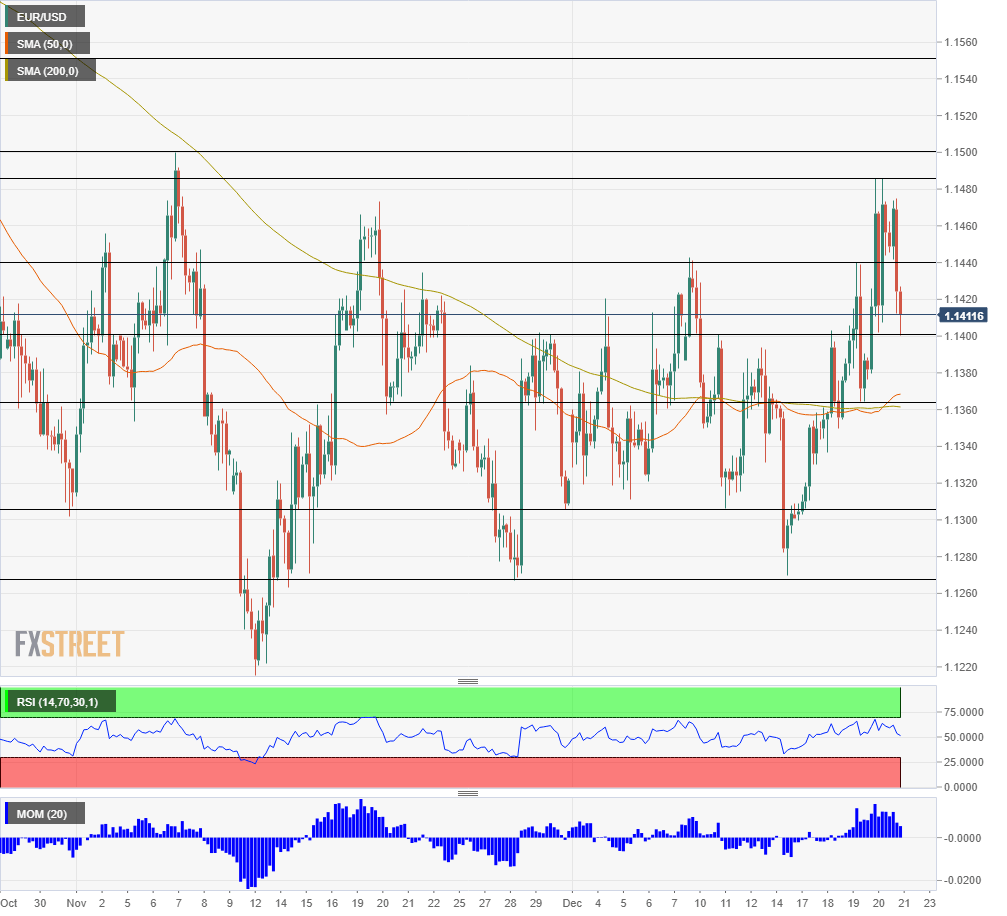 The technical picture is only slightly bullish now. The four-hour chart shows that upside Momentum has waned. However, the pair trades above the 50 and 200 Simple Moving Averages and the Relative Strength Index is far from overbought conditions.

Get the 5 most predictable currency pairs
Previous ArticleUSD/CAD clings to gains above 1.35 following US and Canada GDP data
Next Article Bitcoin Price Analysis: BTC/USD are trying to wear down key barrier to new heights