Latest
You are at:Home»Forex News»EUR/USD: From panic to Santa Rally? Why the skies are clearing, 1.23 is in sight

“Out of control” – these words by UK Health Secretary Matt Hancock about the new coronavirus strain sent markets tumbling. The variant is around 70% more transmissible and the lack of knowledge about the disease also caused fears, prompting the French government to halt the freight passage between the countries, topping up flight bans.

However, markets tend to exaggerate and that was the case on Monday. The market sell-off boosted the safe-haven dollar, sending EUR/USD to around 1.2130, but as time passed by, investors returned to their senses.

While this COVID-19 mutation is highly contagious, there is no evidence that it is resistant to vaccines according to the European Medicines Agency. The EMA – which approved the Pfizer/BioNTech jab – echoed the words of British scientists and helped calm the atmosphere.

Moreover, there is little doubt that the strain is already circulating on the continent. The UK performs thorough genetic sequencing tests and is therefore ahead in the discovery. If the variant is everywhere and already partially responsible for the winter wave, adopting new restrictive measures would do little to curb the spread at this point.

As long as vaccines cope with the virus, markets have room to rise.

Another potential positive development comes from another EU-UK topic – Brexit. Prime Minister Boris Johnson reportedly offered a major concession on fisheries, making raising the chances of a deal. The news helped the pound recover but the euro is still hesitant. If the breakthrough is confirmed, the common currency would likely be carried higher by a sterling rally.

Across the Atlantic, Congress has finally passed the $900 billion stimulus bill and it now awaits President Donald Trump’s signature. This development had been priced in, but it also contributes to optimism.

Trump is working on a last-ditch effort to stay in power despite losing the elections. Congress is set to ratify Joe Biden’s victory in the Electoral College on January 6 and he may try to convince several Republicans to reject results by several states. Even if all the GOP is on board, Democrats have a majority in Congress as a whole. Investors are unmoved by these efforts.

Later in the day, the US releases final Gross Domestic Product figures for the third quarter, which will likely confirm the leap of 33.1% annualized.

Overall, there is room for recovery. 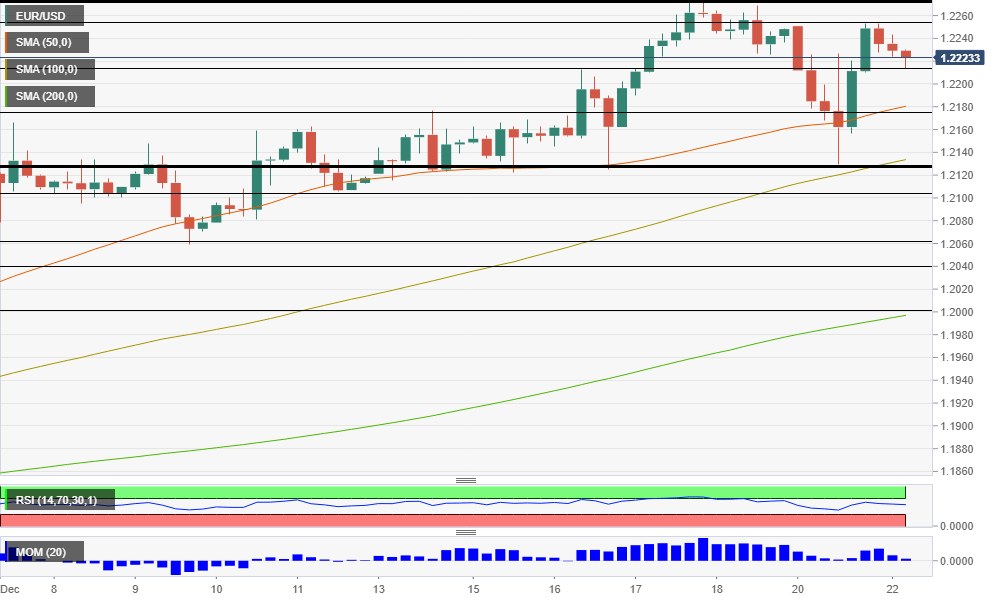 Euro/dollar still has upside momentum on the four-hour chart and trades above the 50, 100 and 200 simple Moving Averages after a quick dip below the 50 SMA on Monday. The Relative Strength Index is below 70, outside overbought conditions.

More Can dethroned King Dollar make a comeback? Santa’s market gifts are generous but not infinite