Latest
You are at:Home»Forex News»EUR/USD has three reasons to fall from here

Are we witnessing the calm before the storm? EUR/USD has been trading within a narrow range of around 40 pips this week – but such low-volatility periods are not here to stay.

To which direction will euro/dollar break? Three recent developments are pointing to the downside.

China’s Vice-Premier Liu He has reportedly expressed cautious optimism about trade talks – but that is the only piece of hope in a sea of pessimism.

Washington and Beijing have been unable to agree on the removal of tariffs. Reports coming out of the negotiations between the world’s largest economies suggest that the issue of duties – that is part of the first phase of the deal and that markets care about most – is yet to be agreed.

The safe-haven US dollar tends to be bid when markets fear about the fate of talks.

The row over Hong Kong remains prominent. Beijing was angered by the Senate’s unanimous approval of a bill supporting protesters in the city-state. The House of Representatives advanced the legislation and it is now awaiting for President Donald Trump’s signature. He may turn it into law as soon as today.

Moreover, the president seemed reluctant to move ahead with a deal, saying that China wants it but that it depends on him. Perhaps his hawkish advisers have convinced him that the new levies planned for December 15 – directly affecting consumers –will be shrugged off by shoppers and the broader economy.

Trump is also pressured by the impeachment inquiry. Gordon Sondland, US ambassador to the EU, spilled the beans by telling a Congressional committee that there was a quid-pro-quo with Ukraine and that all top officials were in the loop.

The meeting minutes from the Federal Open Markets Committee (FOMC) have confirmed that the world’s most powerful central bank plans to leave interest rates unchanged. Only “a couple” of members wanted to cut rates further, while “several” rejected cutting rates in the October meeting.

Earlier, Lael Brainard, Governor at the Fed, said that trade uncertainty is weighing on investment, but supported the Fed’s wait-and-see approach.

Cleveland Fed President Laureta Mester, a hawk, will deliver a speech later today. She is highly unlikely to veer from the message.

The Fed’s approach is dollar-positive. Several second-tier US figures are due out later on Thursday, with housing figures standing out. See Existing-Home Sales Preview: Sales follow mortgage rates

3) ECB minutes may weigh on the euro

Looking forward, the European Central Bank’s Monetary Policy Meeting Accounts may show that the doves are fighting back and may push for more stimulus. Several ECB members have said that monetary policy has yet to reach its limits, and this message –that the Frankfurt-based institution may print more money – may be repeated, sending the euro down.

Germany escaped a recession, but that may be detrimental for the euro, as the largest economy may refrain from spending and stimulating the economy. And that may push the ECB to add more stimulus, weighing on the common currency.

Christine Lagarde, the new President of the ECB, will speak on Friday, at the same time as Markit publishes fresh Purchasing Managers’ Indexes.

Overall, the main factors favor the dollar over the euro. 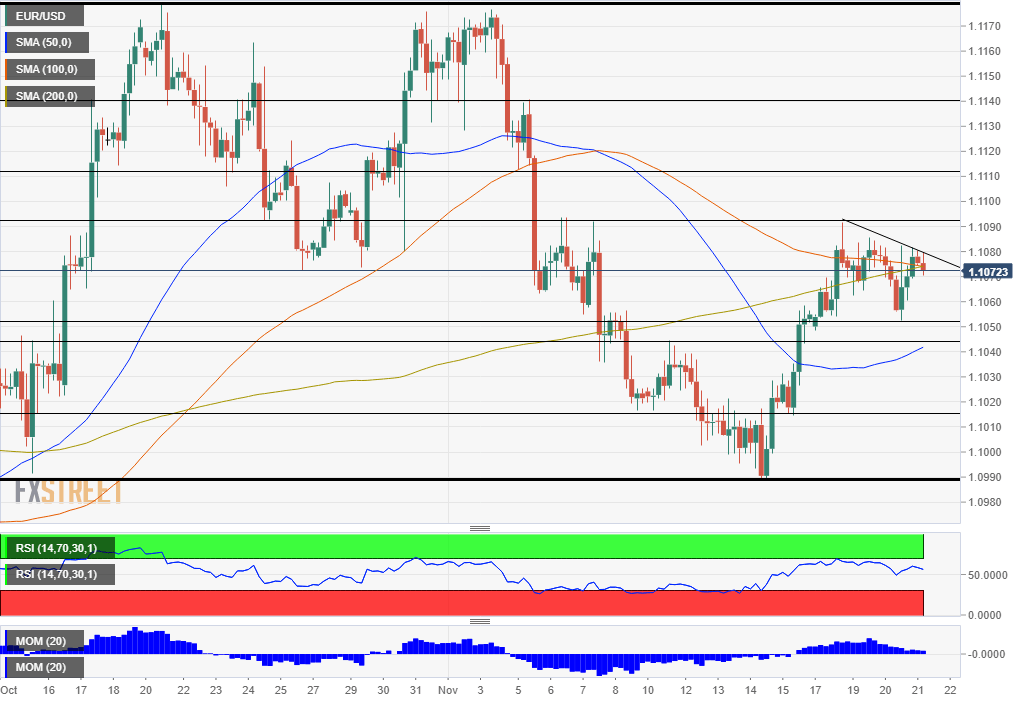 Several days of virtual standstill have weighed on momentum, which is almost non-existent. The 100 and 200 Simple Moving Averages have converged close to the current price, while euro/dollar holds above the 50 SMA. EUR/USD is capped by a minor downtrend resistance line.

Get the 5 most predictable currency pairs
Previous ArticleChina’s Premier Li: China will not resort to flood-style strong stimulus
Next Article GBP/USD may take aim at the highs amid Boris’ boost