“It’s the economy, stupid” was strategist James Carville’s phrase in Bill Clinton’s successful election campaign in 1992. And for a change, today’s euro-zone economic indicators have beaten expectations. That is one of three reasons for the rise – but each positive development has its caveats and this recovery to 1.10 may hit the wall.

Markit’s Purchasing Managers’ Indexes for the services sector have exceeded expectations in almost all countries – and all are showing growth. The final euro-zone Services PMI for August scored 53.5 points – better than expected and above 50 – reflecting growth.

However, Manufacturing PMIs have published on Monday continued showing contraction with scores below 50. Most worryingly, Germany’s industrial sector – the “locomotive” of Europe – suffers more than others.

2) Fears of a US recession

The US ISM Manufacturing PMI was supposed to be a hint toward Friday’s Non-Farm Payrolls. Instead, the drop to 49.1 points – the lowest in three years and reflecting contraction. Fears of a recession are rising in the world’s largest economy – in large part due to the trade war with China.

Nevertheless, if America is struggling with the world’s second-largest economy – Germany is under pressure due to falling exports to China. US weakness is not good news for Europe.

With the clock ticking down to the all-important European Central Bank decision on September 12, the hawks are coming out against restarting the bond-buying scheme. Madis Müller, Governor of the Estonian central bank, joined his German colleagues in saying that markets expect too much. A limited stimulus packed from the Frankfurt-based institution has helped push the euro higher.

However, the ECB also has its share of doves – first and foremost President Mario Draghi. While Draghi is stepping down in November, the nominee to succeed him, Christine Lagarde – testifying today – is no less dovish. She reiterated the need for accommodative monetary policy.

Also across the Atlantic, the Fed is split. Some members prefer no cut while others would like to slash rates by 50 basis point in on September 18. And also in Washington, the final word belongs to the Chair. Jerome Powell will speak on Friday and will have the most significant impact.

Ahead of Powell, we will hear from No. 3 at the Fed today. John Williams, President of the New York branch of the Federal Reserve, stands out among Fed and ECB speakers today.

All in all, EUR/USD is not out of the woods, and technicals are also worrying for the bulls. 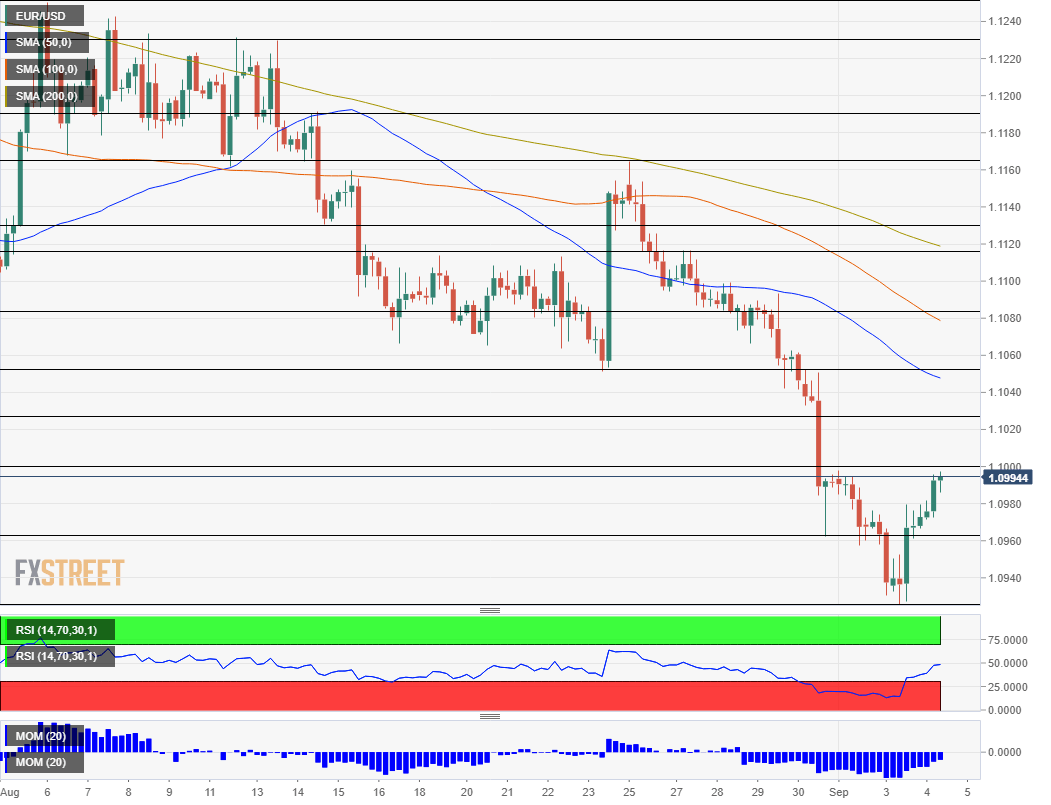 EUR/USD still suffers from downside momentum on the four-hour chart. The Relative Strength Index (RSI) is above 30 – thus not reflecting oversold conditions anymore. Moreover, the currency pair continues trading below the 50, 100, and 200 Simple Moving Averages.