Latest
You are at:Home»Forex News»EUR/USD rise may prove a selling opportunity

Another bounce, another selling opportunity? The “dead cat bounce” pattern” is characterizing EUR/USD in February. Every recovery attempt is limited in range and is followed by a fresh four-month low. On Tuesday, the world’s most popular currency pair dipped below 1.09 and already neared the 2019 low of 1.0879 – opening the door to the lowest levels since 2017.

What is driving EUR/USD down?

Despite grabbing the headlines, the coronavirus outbreak is only a sideshow for euro/dollar. The economic divergence between the robust US economy and the struggling eurozone one is the primary driving force. On Tuesday, markets heard from central bankers, who did little to change that notion.

Jerome Powell, Chairman of the Federal Reserve, said that the bank is closely monitoring the coronavirus outbreak, its damage to the Chinese economy and potential spillovers to the rest of the world. However, he expressed satisfaction with the upbeat domestic situation and added that “There is no reason why the expansion can’t continue.” The Fed Chair continues his testimony today and will respond to questions from Senators.

More: Chairman Powell in Congress: Back to basics

On the other side of the pond, Christine Lagarde, President of the European Central Bank, reiterated that inflation remains “some distance” below the bank’s goal. The ECB is performing its strategic review, which Lagarde aims to conclude in July, earlier than originally stated.

According to reports, the Frankfurt-based institution is leaning toward leaving house prices out of Consumer Price Index calculations. Without their addition, CPI will likely remain lower, prompting the ECB to keep lower interest rates for longer. The news is weighing on the common currency.

Returning to the coronavirus, the death toll has surpassed 1,100 but the pace of new infections is falling according to Chinese authorities. Stock markets remain calm amid optimism that the respiratory disease is set to peak out.

Eurozone industrial output figures for December are forecast to show a drop – unsurprising after Germany and France reported sharp falls – reinforcing the notion of sluggish growth in the old continent. 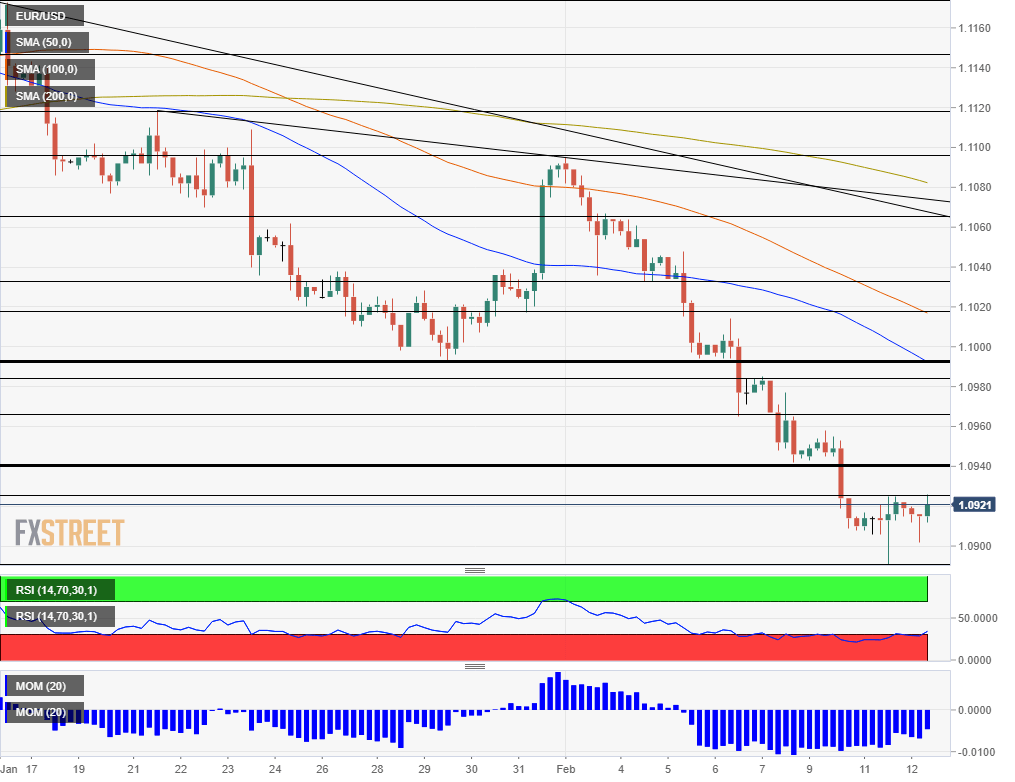 EUR/USD is trading above 1.09 but below the 50, 100, and 200 Simple Moving Averages on the four-hour chart and suffers from downside momentum. Moreover, the Relative Strength Index has risen above 30, outside oversold conditions and allowing for additional falls.