Latest
You are at:Home»Forex News»EUR/USD: Sell opportunity? Why the current calm may turn to a fresh downfall

Dead-cat bounce. Again. That pattern of a significant downfall followed by a minor recovery and then a fresh dive is typical to EUR/USD – and maybe in play once again. The factors that have enabled the recovery are weak and may reverse swiftly.

EU leaders toned down their rhetoric regarding banning exports of vaccines amid concerns of hurting supply chains. Have cooler minds prevailed? The bloc still allows blocking of immunization shipments out of the EU and seem especially keen on punishing AstraZeneca – the partially British-owned firm which is Brussels’ favorite punching bag.

Coronavirus cases continue rising in the old continent and are also causing a rift between the largest countries – Germany will now ask people coming from France to show a negative PCR test due to rising infections. The move has caused tensions between Paris and Berlin, which have worked closely together in this crisis.

The German IFO Business Climate will likely show a minor uptick in confidence, but that is priced in after robust Purchasing Managers’ Indexes released earlier this week.

On the other side of the pond, investors were encouraged by the drop of US jobless claims to 684,000, the lowest since the pandemic broke out. However, Personal Spending and Personal Income due out on Friday may show a drop in February after a stimulus-related jump in January. Core PCE, the Federal Reserve’s preferred gauge of inflation, will likely remain subdued as well.

Another source of optimism is President Joe Biden’s pledge to inject 200 million vaccine doses in his first 100 days in office. On the other hand, COVID-19 infections have bottomed out in the US and have begun rising. The immunization campaign is running at full speed, but there is still room to run in order to approach herd immunity that would significantly depress the disease.

All in all, the current upward swing in the mood will likely be temporary. 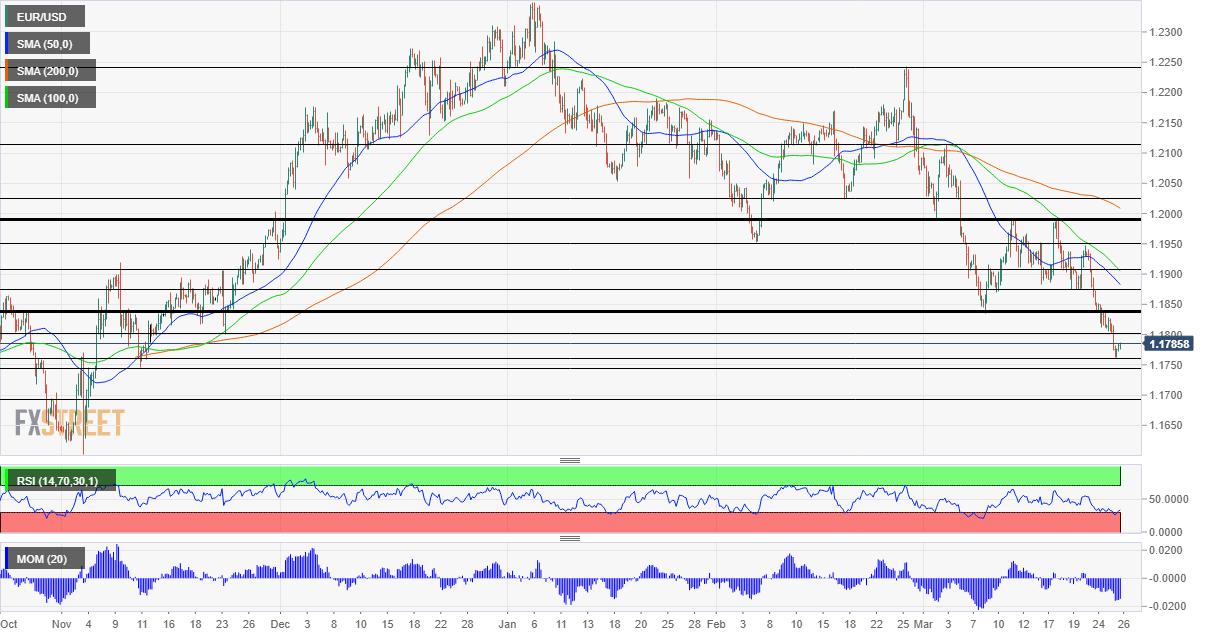 Euro/dollar is suffering from downside momentum on the four-hour chart and is trading below the 50, 100 and 200 Simple Moving Averages. The Relative Strengh Index is just above 30, outside oversold conditions and implying further falls are on the cards.

Global markets are positioned for a robust recovery, but where is the proof?

Get the 5 most predictable currency pairs
Previous ArticleUSD/JPY: Break above 109.30/40 to leave the 110.00 psychological level in play – OCBC
Next Article XLM price Prediction: Stellar resumes uptrend after bouncing off key technical pattern