Latest
You are at:Home»Opinions»EUR/USD: Stubborn COVID figures, lack of coronabonds, depressing data all point down

Is the recovery over? EUR/USD kicked off the post-Easter week with optimism about flatter coronavirus curves, but that gave way to losses as the economic damage became prominent. Additional health and financial figures – especially forward-looking ones – are on the docket now.

This week in EUR/USD: Cautiously moving to ease lockdowns.

Europe is flattening the coronavirus curve – yet at a frustratingly low pace. Deaths in Italy and Spain remain above 500 per day, and French figures have ballooned and near the levels in these two countries. Germany, which is doing better, is also unable to bend down the curve. All countries are struggling to count unconfirmed deaths from the disease outside hospitals, a topic that adds to the uncertainty.

However, relative stability has not prevented the beginning of lifting restrictions. Spain has allowed some non-essential employers to return to work. Germany laid out a plan to get back to normal, and also Italy is moving gradually toward reopening the economy. The European Commission published guidelines for opening up the economy, yet coordination is lacking.

Absence of unity is also felt on the political level – and markets are taking note. The weak compromise regarding an aid package reached in the previous week has sent investors out of Italian bonds, increasing the spread between them and German bunds. The Eurogroup failed to agree on common bonds – coronabonds – in a step that mostly hurt debt and disease-stricken Italy. That has also weighed on the euro.

A worrying increase in COVID-19 statistics – inside and outside hospitals – has too engulfed the US. And even on the other side of the pond, there has been some hope from New York, where pressure on hospitals dropped. Together with President Donald Trump’s guidance to open the economy – at first forcefully and later calmer – markets advanced, and the dollar came under pressure.

On the other hand, the greenback enjoyed – paradoxically – terrible US economic figures. Initial jobless claims rose by over five million in the week ending on April 10, and continuing claims neared 12 million. The total losses of positions have wiped out all the gains since the 2008-2009 crisis.

Retail sales plunged by 8.7%, worse than expected, and despite surges in groceries – stockpiling ahead of the lockdown. April could be worse. The Federal Reserve’s Philadelphia and New York indicators collapsed, and the central bank’s Beige Book also noted a “severe” downturn.

Chinese data provided some relief as trade and industrial output numbers for March beat expectations. However, the economy shrank by 6.8% yearly in the first quarter of 2020 – the worst since at least 1992.

The daily health updates will likely continue to be of interest as they impact decisions on lockdowns. Germany releases data around 5:00 GMT, Spain, at around 9:00, while Italy and France publish figures in the afternoon. It is essential to note that figures published on Mondays and Tuesdays suffer from the “weekend effect” – statistics are more optimistic on Mondays and pessimistic on Tuesdays.

See Coronavirus figures: Why traders should ignore Mondays and Tuesdays, focus on other stats

The Spanish parliament is set to approve another extension of the state of emergency on Wednesday, while other countries will also announce measures. Steps to boost economic activity will likely underpin the euro while restoring restrictions or pushing back the dates for a gradual return to normal will probably weigh on the common currency.

EU leaders will hold a videoconference on Thursday, trying to sort out a coordinated exit strategy and a recovery plan – where the clash over coronabonds will continue. Germany and the Netherlands remain opposed to sharing the debt and assuming they get their way, the euro may suffer. If leaders commit to a package worth more than a trillion euros, perhaps that would help the common currency, but the chances are low.

Markit’s preliminary Purchasing Managers’ Indexes for April stand out on Thursday. The relatively upbeat Manufacturing PMIs – below 50, reflecting contraction, but above 40 – is a result of a quirk in the calculation. A delay in deliveries is counted as a positive factor. While the formulas are unlikely to change, surveys among the industry are projected to decline.

Services PMIs have already plunged to the deeper territory – below 30 in France and barely above that level in Germany – and will likely remain depressed once again. Any advance may reflect optimism about reopening the economies. Tourism, bricks, and mortar retail, and restaurants are among the hardest hit.

Last but not least, IFO – Germany’s No. 1 Think-Tank – will publish its Business Climate statistics for April, and another substantial fall is on the cards.

Here are the events lined up in the eurozone on the forex calendar: 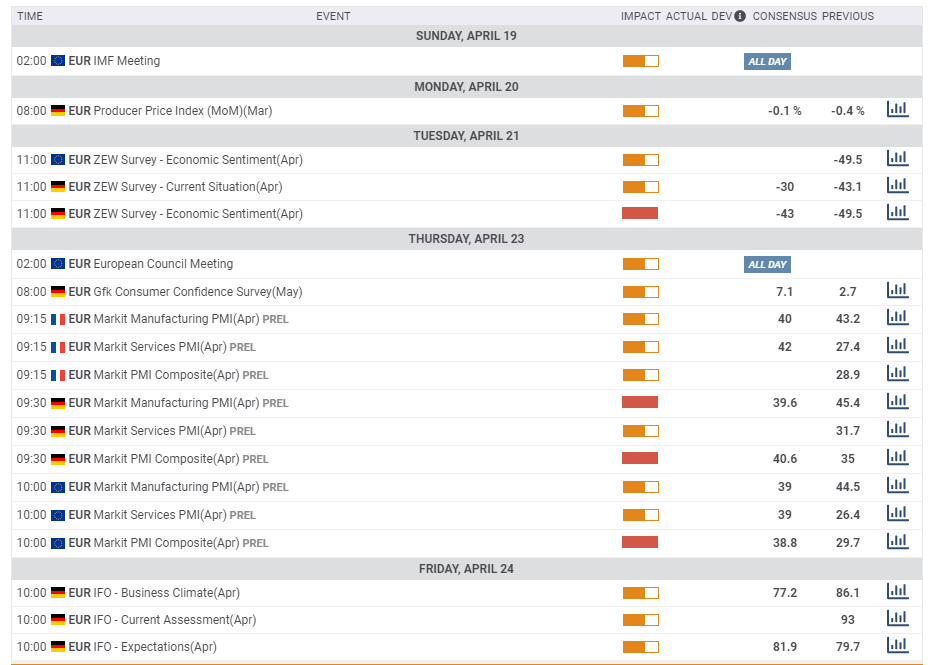 US events: Coronavirus and consumer data

When and how will the US economy reopen? After seeing the damage done, governors will have to make tough decisions and consider if the achievements in flattening the curve justify relaxing the lockdowns and by how much. New York remains the epicenter of the disease.

Each state has its own considerations, and they are all pressured by both the White House and health officials. Trump wants to return to normality as soon as possible while epidemiologists would like to see more improvement before enabling more movement.

The Chicago Fed National Activity Index for March will likely drop – following the footsteps of other regional indicators. Existing Home Sales may not reflect the drop in activity just yet.

Weekly Unemployment Claims remain in the limelight, with growing weight for Continuing Claims. Apart from new people applying for jobless benefits, it will be interesting to see how many are already unable to return to work. Both numbers will likely be in the millions, pushing the four-week moving average higher.

While Markit’s PMIs carry less weight than those published by ISM, they provide an early view of sentiment in April. The services sector statistics have fallen significantly below the manufacturing one, and they are predicted to diverge in the upcoming report, remaining well under 50 – reflecting contraction.

Durable Goods Orders figures for March will likely show a double-digit plunge driven by plummeting aircraft sales. Other indicators will probably show more moderate falls. The numbers represent an investment and feed into first-quarter Gross Domestic Product data that is due out on the following week. 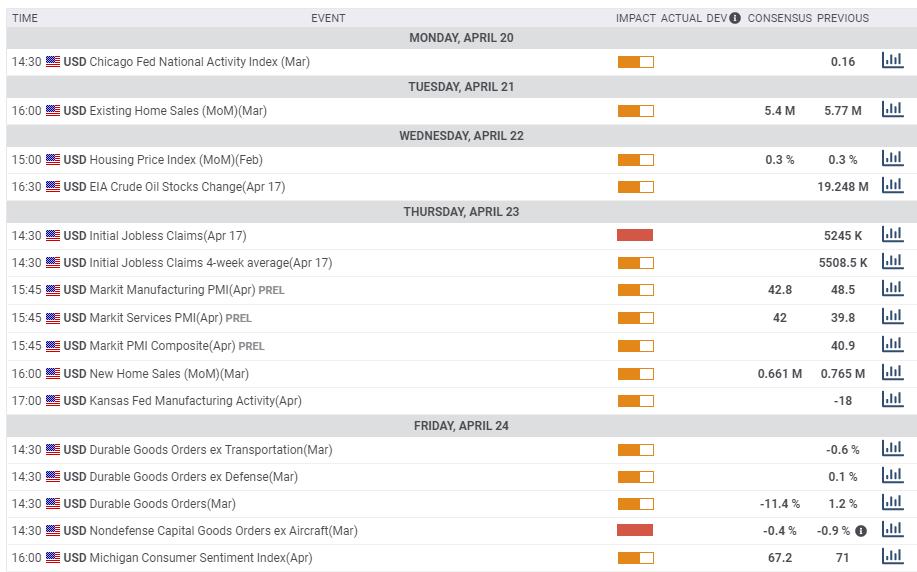 Euro/dollar has been setting higher lows and lower highs – forming a choppy triangle of sorts. Textbooks suggest that once the currency pair picks a direction, the movement would be sharp. But where will EUR/USD go to? Momentum has turned positive but the world’s most popular currency pair is trading below the 50, 100, and 200-day Simple Moving Averages.

Overall, the picture is mixed.

Without a critical fall in COVID-19 figures, coronabonds, or a surprising leap in economic figures, the general gloom could continue pushing EUR/USD to the downside.

The FXStreet Poll is showing a bearish trend in the short and medium-term and a bullish move later on. Average targets are little changed since last week. 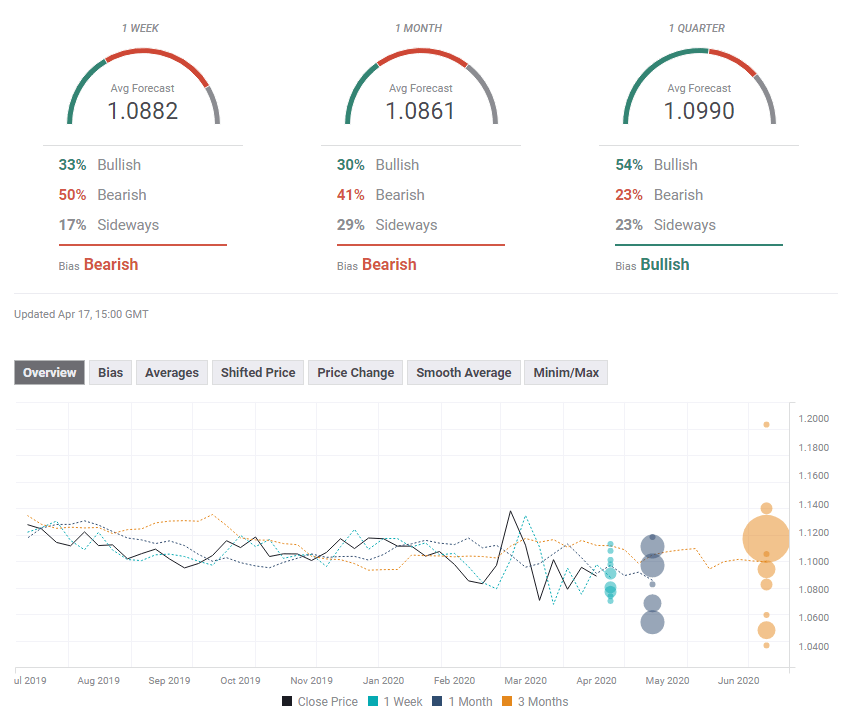 Get the 5 most predictable currency pairs
Previous ArticleAUD/USD Price Analysis: Seems vulnerable near multi-day lows, around 0.6280 region
Next Article US Dollar Index Price Analysis: Target is now at 101.00