A signing ceremony on US soil – that may be President Donald Trump’s victorious picture – and he may be willing to pay a price for that. According to media reports, China has requested the US to remove the 15% tariff on around $112 billion worth of goods imposed on September 1 – and Washington is considering it. A summit between Trump and his Chinese counterpart Xi Jinping may take place later this month.

What is more certain is that trade talks between both sides are progressing – as officials from both sides say. Moreover,  President Xi has pledged to open up the economy and enhance the protection of Intellectual Property (IP). Is he ready to accept US demand on that topic? IP has been one of the sticking points in talks between the world’s largest economies.

The US Dollar is strengthening against major pairs as optimism lowers the chances that the central bank cuts interest rates in 2020. Mary Daly, President of the San Francisco branch of the Federal Reserve, has said that monetary policy is appropriate and signaled that she supports the wait-and-see approach the bank has adopted.

On the other side of the Atlantic, Christine Lagarde, the new President of the European Central Bank, delivered her maiden speech on Monday but refrained from addressing fiscal or monetary policy. She spoke at an event honoring Wolfgang Schäuble, Germany’s former finance minister and one of the architects of the euro zone’s austerity policy.

She may yet clash with her German colleagues at the ECB over both monetary policy and the bank’s call for governments to do more – a call that the largest economy in the continent has been ignoring.

The highlight of today’s economic calendar is the ISM Non-Manufacturing Purchasing Managers’ Index (PMI). This forward-looking gauge is set to show a pick up in growth in America’s services sector, contrasting the downbeat manufacturing one.

See US Service Sector October PMI Preview: That turned corner must be around here somewhere

The Job Openings and Labor Turnover Survey (JOLTs) – released at the same time – is a gauge of the labor market that the Fed considers, but it tends to have a muted impact on markets. The data is for September while the most recent Non-Farm Payrolls report is for October.

All in all, updates on trade talks and US figures are set to dominate EUR/USD trading. 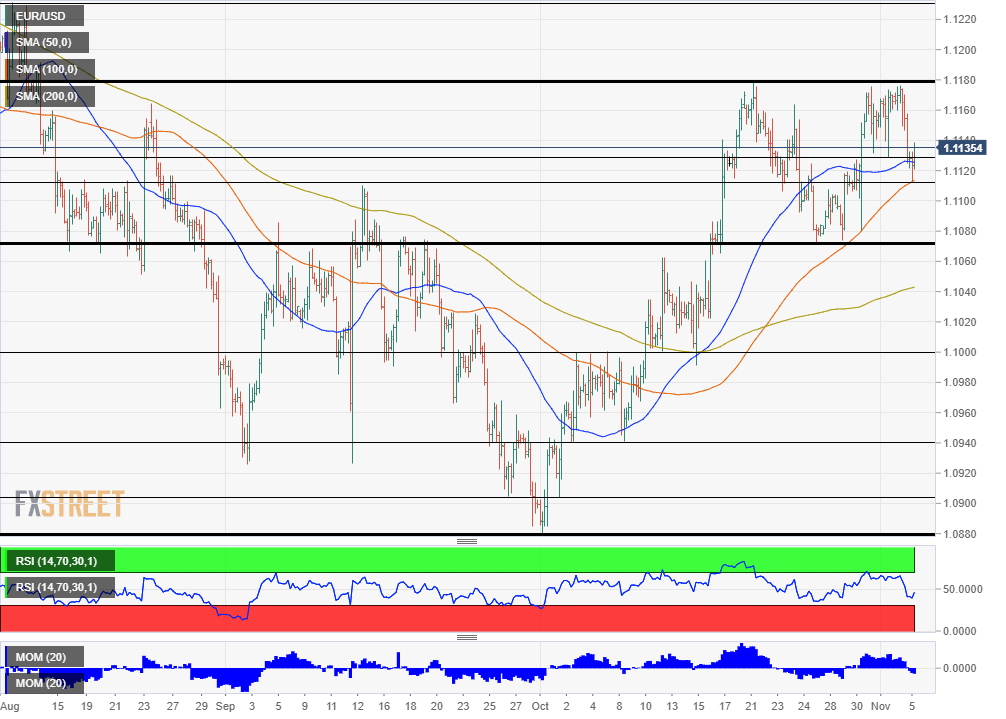 Momentum on the four-hour chart has turned negative, and EUR/USD dipped below the 50 Simple Moving Average – both bearish signs. However, the currency pair bounced off the 100 SMA. Overall, bears are feeling more confident but have yet to take control.

Fierce resistance awaits at 1.1180, which has capped euro/dollar twice in recent weeks – a double-top. It is followed by 1.1230, which held the pair down in August. It is closely followed by 1.1250, also dating back to the summer.

Get the 5 most predictable currency pairs
Previous ArticleCrypto Today – Burning star into the Stellar Lumens Constellation
Next Article EUR/USD rebounds from lows near 1.1110