Home » EUR/USD: The toss-up between COVID and US elections

EUR/USD: The toss-up between COVID and US elections

Largely due to its negative impact on the US dollar, a contending Joe Biden victory would be positive for the euro.

As such, with the polls pointing to such a scenario, the euro has climbed decisively this week from a low of 1.1627 (scored following a strongly dovish European Central Bank and COVD spread risks) to a high of 1.1739, on track for a test of the psychological 1.18 level.

Much of the bad news was already priced into the single currency in this recent drop. However, a market-friendly result may only have a short-term shelf life of support for the euro if the sentiment deteriorates even further for the eurozone economic recovery.

On a side note, a Biden victory is also bullish for the prospects of a faster end of the virus which could undermine the euro if investors take the view that the US will recover a lot faster than the eurozone.

The European Central Bank has already been pre-committing to act in December and is not ruling out using all available instruments.

However, the spread of the virus and subsequent lockdowns could be catastrophic for the eurozone politics and unnerve investors once again.

There is still plenty that can go wrong for nations of Europe enduring what is now a second wave of the epidemic that might have only just gotten started.

For instance, just today, France reported the highest death toll since made April and both the Netherlands and Hungary have announced new virus lockdowns.

Moreover, on the domestic EZ front, it is a very quiet week ahead, with September retail sales on Thursday which is expected to have a negligible impact on EUR. So, the emphasis stays on the spread of the virus.

This could hamstring the currency to a degree no matter the outcome of the election and leave the focus on the higher beta currencies, such as AUD. Comparatively, euro has been trading rich to the likes of the AUD, especially fro a market positioning standpoint.

However, on the flip side, a contested election or even a market surprise with the incumbent US President Donald Trump winning the election, there is a lot more at stake for which the euro could really come unstuck.

Both EUR/USD and EUR/JPY could end up looking down into the abyss in anything other than a Biden victory as illustrated in the following technical analysis: 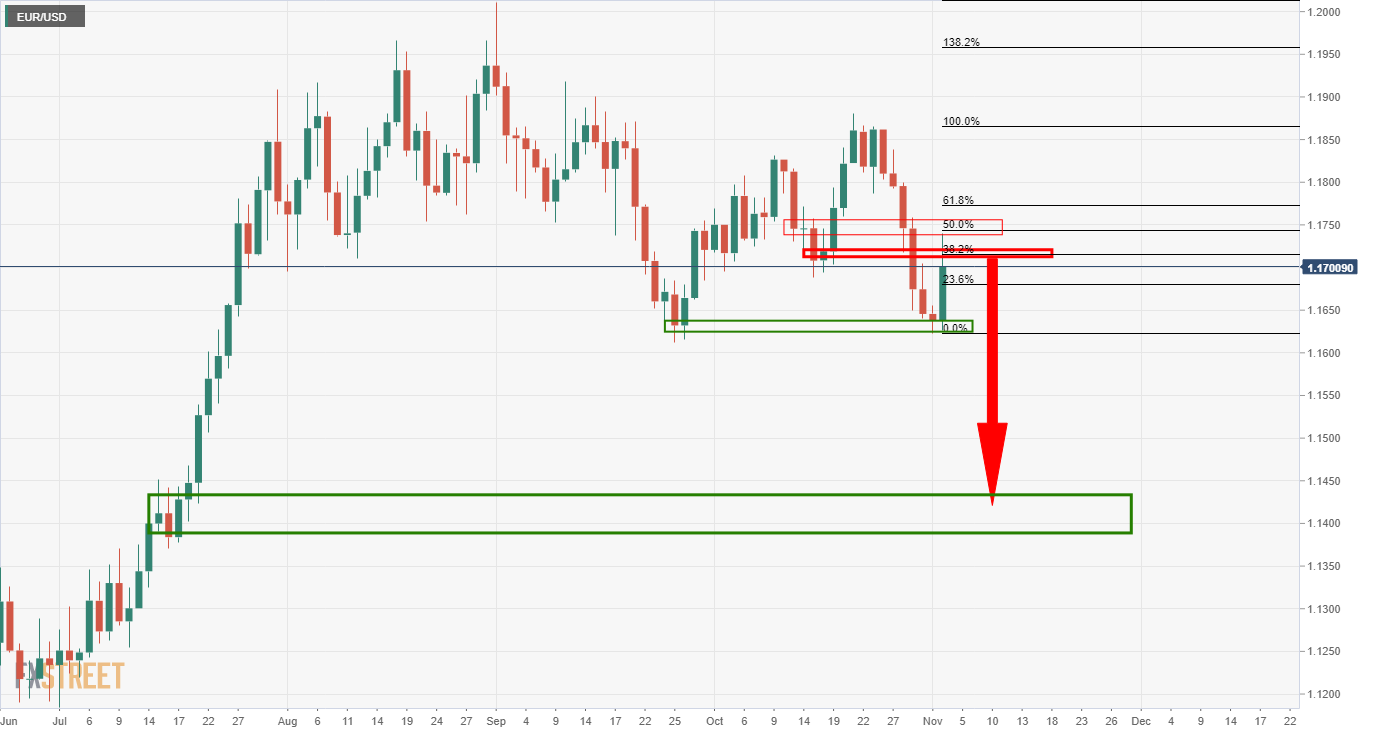 EUR/USD hangs in the 1.7 area on anticipated Biden victory. COVID-19 is a big fly in the ointment for euro bulls.  EUR/USD is currently trading at 1.1703 between a low of 1.1630 and a high of 1.1740, up some 0.54% at the time of writing in anticipation of a so-called Blue wave outcome, (a sweeping Democratic Party victory).  Largely due to its negative impact on the US dollar, a contending Joe Biden victory would be positive for the euro. As such, with the polls pointing to such a scenario, the euro has climbed decisively this week from a low of 1.1627 (scored following…