Latest
You are at:Home»Forex News»EUR/USD: US inflation fears and ECB dovishness to keep the pair pressured (for now)

Hold the line – the rallying cry for several meme stocks seems relevant for EUR/USD. There are clear reasons for the currency pair’s retreat from the highs, yet it it probably remains only a temporary correction.

Markets have cooled down on hopes that the US economy is cooling down after Friday’s weak Nonfarm Payrolls results. Some see the meager 266,000 increase in jobs as skewed by the pandemic, while another narrative suggests that the lack of hiring is due to high unemployment benefits.

More importantly, fears of rising inflation remain prevalent, as commodity prices continue rising and after China reported a leap in producer prices – 6.8% annually, more than predicted. Tech stocks have already suffered from these growing concerns and the safe-haven dollar is also gaining some ground.

Robert Kaplan, President of the Dallas branch of the Federal Reserve, added to worries of tightening by repeating his desire to begin reducing the bank’s bond-buying scheme. On the other hand, several of his colleagues are set to speak later in the day and repeat the bank’s stance that current inflation is transitory.

Investors are also waiting for Wednesday’s Consumer Price Index statistics from America. They may confirm these fears or help dismiss them.

On the other side of the pond, the euro has been suffering dovish comments from Francois Villeroy de Galhau, a member of the European Central Bank. He favors maintaining the ECB’s bond-buying scheme at least through March 2022, if not beyond. After several contradictory headlines, his words seem to carry more weight and push the common currency lower.

Nevertheless, the euro remains underpinned by Europe’s accelerating vaccination campaign. The old continent is catching up with the US and the efforts are bearing fruit – COVID-19 cases are falling in Germany and in other places. Roughly 30% of EU residents have received at least one jab.

The scientific community in Europe is eagerly awaiting Phase 3 results from CureVac, a German pharmaceutical firm that has developed an MRNA vaccine  – like that of Pfizer/BioNTech and Moderna.

Overall, while the current correction is justified, it could later make way for another upswing. 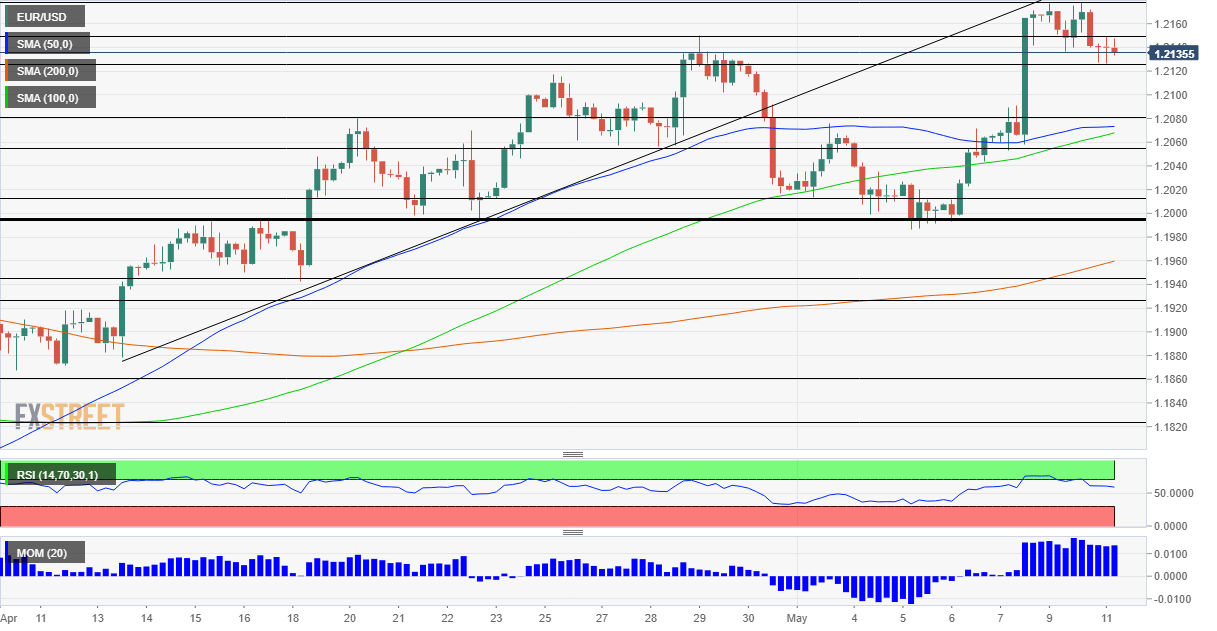 Euro/dollar is benefiting from upside momentum, not the four-hour chart and trades above the 50 and 100 Simple Moving Averages (SMA). The Relative Strength Index (RSI) has dropped below 70, thus exiting overbought conditions and allowing for more gains.

Get the 5 most predictable currency pairs
Previous ArticleGBP/USD set to target 2018 highs at 1.4377 – Commerzbank
Next Article USD: China Reflation At Crossroads; Implications For USD – BofA