Latest
You are at:Home»Forex News»EUR/USD: Why any bearish takeover is set to be temporary, levels to watch

The mob supporting President Donald Trump has failed in its coup attempt – and EUR/USD will likely fall short of ending the broad rally. The world has been digesting the extraordinary events on Capitol Hill – a well-organized group incited by the losing incumbent taking over parliament violently, and luckily failing to overturn the results. Congress certified Joe Biden as the winner early on Thursday.

Nevertheless, scenes reminiscent of the third world did little to sway markets as investors have seen the dramatic scenes as having no term impact on economics. The short physical capture of Congress has no impact – while the orderly takeover of the Senate by Democrats has a positive one.

Biden’s party secured effective control of the upper chamber after both Raphael Warnock and Jon Ossof won their runoff races in Georgia. That would enable Democrats to pass another generous stimulus package – yet probably insufficient to make market-unfriendly reforms. Dems will only have a slim 51:50 majority.

While prospects of further government spending bolstered markets, the dollar reaction was mixed. On one hand, the safe-haven greenback suffered a sell-off – but that was quickly replaced by flows stemming from rising bond yields. Expectations of massive bond issuance – to fund new expenditure, prompted investors to sell Treasuries. In turn, higher returns on US debt boosted the currency.

Nevertheless, any increase in the dollar may be temporary. It is essential to remember that the Federal Reserve is ready to buy more bonds if necessary. The Fed’s meeting minutes from the latest meeting showed some on the board are already eyeing additional monetary stimulus.

What could push the Fed into more action? In the immediate term, the answer depends on the job market. ADP’s labor figures disappointed with a loss of 123,000 positions, contrary to an increase that was expected.

Will Friday’s official Nonfarm Payrolls also show a squeeze in hiring? That remains an open question, but bad news for American workers could turn into good news for dollar bears on expectations for Fed action.

Thursday’s economic calendar features jobless claims for the last week of 2020 and the ISM Services Purchasing Managers’ Index for December – a hint for the NFP. Devastating figures could boost EUR/USD, but there is a higher chance it would happen on Friday.

Politics have somewhat overshadowed the pandemic that is raging on both sides of the Atlantic. COVID-19 cases, deaths on hospitalizations continue rising – with the US setting new highs on admissions.

In Europe, politicians are under pressure to accelerate the pace of vaccinations, which has been frustratingly slow. The European Medicines Agency (EMA) approved Moderna’s jabs, but evidence of a concerted effort to vaccinate the population are still to be seen.

Overall, politics, data, and the disease are in the spotlight. 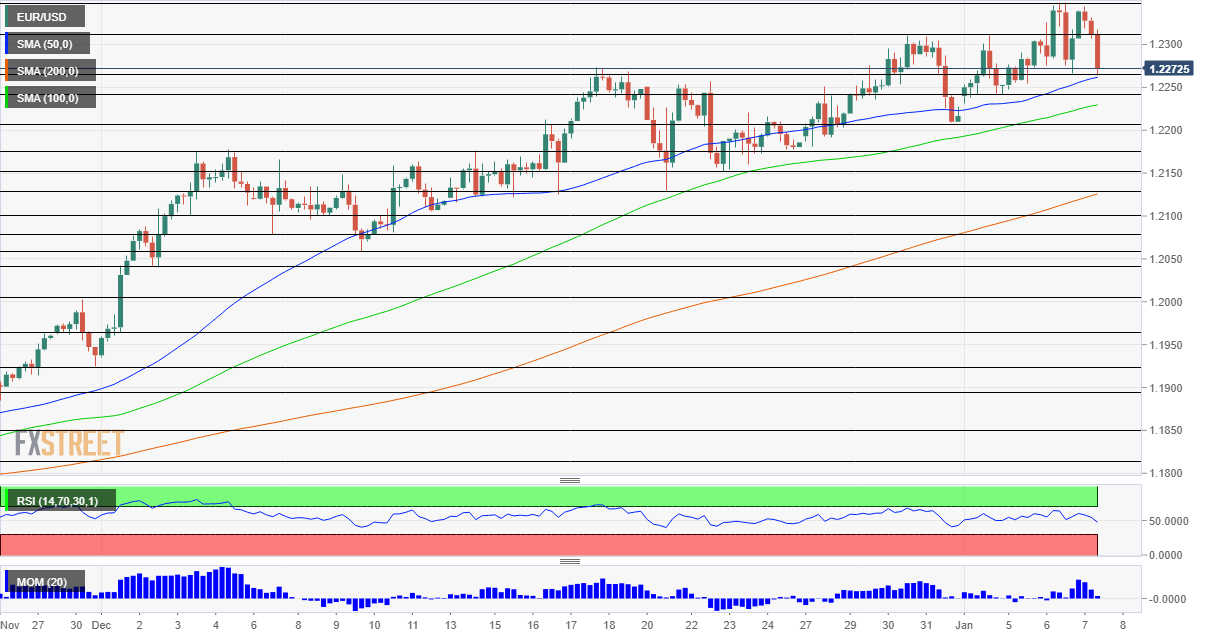 Euro/dollar has been falling, but momentum on the four-hour chart remains positive, and the currency pair trades above the 50 Simple Moving Average.