The Bank of England decided to leave its current policy unchanged at the most recent Monetary Policy Committee meeting of 14 April. The BOE remained focused on the British economy. The statement referred to low food and energy prices which the bank expects to increase over the course of the year. In particular, it referred to the external factors, presumably energy, ‘as a lessening drag’ and cautioned against offsetting the drag too much, thus risking potentially rapidly accelerating inflation further into the future. It’s important to note that the BOE adjourned several days before the Doha conference had adjourned without resolution. Hence, it’s far from improbable that energy prices may remained depressed for some time longer than expected.

Lastly, the statement set its goal of 2% inflation within two years. The bank did take the precaution of warning that these expectations are to be met ‘in the absence of future shocks‘. The statement went on to note the lessened downside risks to the Chinese economy as well as the uneven rates of US GDP growth.

However, the eyes of many analyst may have raced over the usual central bank observations and expectation to the fourth paragraph, where the BOE recognized the depreciating Pound Sterling and that “…  the likelihood that much of the fall in sterling reflects uncertainty surrounding the forthcoming referendum on the United Kingdom’s membership of the European Union raises questions regarding whether the lower level of sterling will persist and its net economic impact… …  There are some signs that uncertainty relating to the EU referendum has begun to weigh on certain areas of activity, as some decisions, including on capital expenditure and commercial property transactions, are being postponed pending the outcome of the vote.   This might lead to some softening in growth during the first half of 2016…” This was essentially a reiteration of what was noted in the 6th paragraph of the March statement

The EU referendum had not been mentioned in the 4 February statement .The MPC even indicated a higher Bank Rate bias: “…  it more likely than not that Bank Rate will need to increase over the forecast period to ensure inflation remains likely to return to the target in a sustainable fashion…”

At this point it’s worth noting that over the past 52 weeks, Sterling achieved is best against the Euro 20 July at £0.69529 per. At that time the Brexit referendum seemed years into the future. From the 20 July, 52 week high, Sterling weakened a bit but regained with a solid trend towards that high, only to fall short at £0.6998 on 18 November. Expectations were for some type of ECB easing action but the full scope was naturally uncertain. The ECB Governing Council decided to reduce the deposit facility rate by 10 basis points in December, but the refinancing and marginal lending facility rates unchanged; the duration of the asset purchase program was extended. These actions were very measured and questioned by reporters at the follow-up press conference, however, as the chart demonstrates, Sterling began a sustained weakening trend versus the Euro.

At the 21 January 2016 Governing Council meeting, the statement seems to indicate that the ECB was far more concerned by the global economy in general: “…The risks to the euro area growth outlook remain on the downside and relate in particular to the heightened uncertainties regarding developments in the global economy, as well as to broader geopolitical risks…”  Further, the Q&A seemed more concerned with the political risks in Spain and Germany than with the UK.

From the 18 November 2015, until Prime Minister Cameron’s announcement of an agreement to modify the nation’s membership in the EU in February 2016, Sterling depreciated 10.69% against the Euro, trending lower and breaching one Fibonacci retracement level after another. It would be difficult to argue that it was the Euro strengthening against Sterling, particularly when the ECB Governing Council was signaling more easing. In fact, PM Cameron’s announcement came about three weeks before the ECB governing council decided to take another, much stronger easing action. Also, what had gone mostly unnoticed in the press reports was the implementation of an extension of targeted long term lending facilities, TLTRO II. Under different circumstances, the combination of the new additional actions would likely have weakened the Euro versus all majors. Amazingly, although the EUR/GBP cross was now below trend, Sterling continued to weaken to its 7 April, 52 week low versus the Euro at £0.80818 per.

No doubt, the BOE has a contingency plan in place, should the referendum favor leaving the EU. The most recent polls indicate a near tie, 44% to stay vs 42% to leave, which indicates up to 14% undecided. However, the important point is that in spite of the relatively well performing UK economy, enough to cause the BOE to have a slight bias towards tightening, Sterling is weakening against the Euro, at a time when the ECB is doing all it can do to flood the EU economy with more Euros!

The ECB took action at the March meeting, but it didn’t refer directly to the potential Brexit. It did note that “…The risks to the euro area growth outlook still remain tilted to the downside… … uncertainties persist and relate, in particular, to developments in the global economy and to geopolitical risks…”  Further, Sterling continued to weaken vs the Euro!

At the 21 April meeting, ECB President Mario Draghi finally did have the opportunity to address the Brexit issue during the press conference Q&A: “...we view the participation of the UK in the European Union as mutually beneficial… …  Is it enough to endanger the economic recovery in the euro area? The assessment of our staff is that the risk of this happening is limited…”  Hence, the ECB seems to be expressing an urging and hopeful confidence, but at the same time is bracing itself for the possible eventuality.

Hence, it’s reasonable to expect the EUR/GBP cross to react more to Brexit Polling than to any macroeconomic data or central bank actions as the June referendum vote draws near. In particular, it’s difficult to see Sterling strengthening versus the Euro anytime soon. 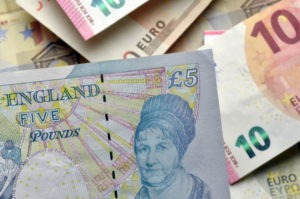 The Bank of England decided to leave its current policy unchanged at the most recent Monetary Policy Committee meeting of 14 April. The BOE remained focused on the British economy. The statement referred to low food and energy prices which the bank expects to increase over the course of the year. In particular, it referred to the external factors, presumably energy, 'as a lessening drag' and cautioned against offsetting the drag too much, thus risking potentially rapidly accelerating inflation further into the future. It's important to note that the BOE adjourned several days before the Doha conference had adjourned without…