Latest
You are at:Home»Forex News»EUR/JPY close to a monthly gain of 1000 pips –

January has been a great month for volatility and also for directional trading. One of the finest examples is EUR/JPY. The popular cross ended 2012 at 114.24 and is now trading around 124, after peaking at 124.17.This is the 6th consecutive month of gains for EUR/JPY, which is now trading at levels last seen in May 2010. Here are the big lines ahead. 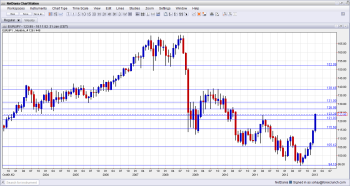 138.50 was the post-financial crisis peak and was several times during 2009. Above this line, there is a big distance until the next line: the pre-crisis 152 spot.

The cross enjoys a falling yen and a strengthening euro. The new Japanese government entered office in the last days of 2012 and continued pushing through on its election promises – the fall of the yen accelerated.

The euro got a boost from the notion that the worst of the debt crisis is over, and especially from the ECB rate decision, where Draghi revealed that the decision not to cut rates was unanimous, and expressed hopes for “positive contagion” from the financial markets to the real economies.