Latest
You are at:Home»Forex News»Euro-zone inflation falls to 0.7% – EUR/USD follows

Euro-zone flash CPI rose only 0.7% YoY in January, the same as in November, according to the flash estimate. It was expected to rise by 0.9% year on year, after rising 0.8% in December, but German weakness already pointed to a softer figure. These are the initial, flash figures for January. They will be revised later on. Core CPI rose 0.7% in December and moved up to 0.8% in January. The all-European unemployment rate was expected to remain unchanged at 12.1% but actually fell to 12%. The headline figure is very weak, and the somewhat better core number is not enough to compensate. 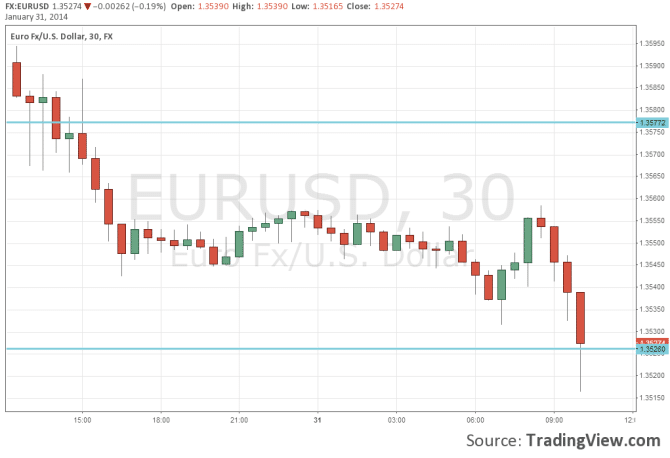 Energy prices fell 1.2% and food, alcohol and tobacco rose 1.7%. As these are volatile numbers, the focus is on the bottom line figure and the core number, which remain at low levels.

Inflation is weak, but probably not enough to trigger a move right now. The ECB is more likely to hint about a move in February, and could set a negative deposit rate in March, assuming inflation remains so weak.

Signs for a weak rise in CPI were already received yesterday with the release of German flash CPI. Consumer prices in the euro-zone’s largest economy rose by 1.3%, lower than December. The HICP remained at 1.2%. Also Spain reported weaker than expected inflation numbers.

Earlier in the day, Germany reported a fall of 2.5% in retail sales for the month of December, while France saw a drop of 0.1% in consumer spending in December.