As we turn the page into February, the single currency shows no signs of stopping: EUR/USD now trades at 1.3624 after climbing above the round number of 1.36 and breaking resistance at 1.3610. As previously described, the previous consolidation seems to have been a pause to respect uptrend resistance. As time passed by, so did the uptrend resistance line and eventually the pair followed. 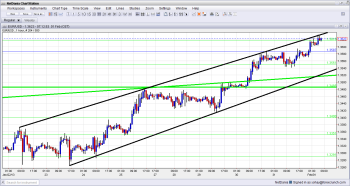 It will be interesting to see if the upcoming Non-Farm Payrolls releases will move the markets. See how to trade the NFP with EUR/USD.

No apparent one-time reason can be cited for the fresh break: the upwards move by the euro is due to  relief regarding the debt crisis and returning flows into the euro-zone. However, the euro-zone is still in recession, and a stronger currency certainly reduces the chances of getting out of a recession.

For more, see the EURUSD forecast.

Also the yen continues to weaken across the board in the wake of February. Here are updates on USD/JPY and EUR/JPY.

Get the 5 most predictable currency pairs
Previous ArticleEUR/JPY close to a monthly gain of 1000 pips –
Next Article USD/JPY, EUR/JPY Break to Fresh Highs – Will the NFP