Latest
You are at:Home»Forex News»EUR/USD Breaks to 7 Week High as Optimism for an

The markets aren’t waiting for Spain to say “I do” – the German nod for the ECB’s bond buying program and the progress of plans within the ECB is already boosting the euro, to highs last seen in early July. It has broken important resistance and is now nearing uptrend resistance.

The result was also seen in a successful bond auction in Spain. Will Spain make the move in Friday’s regular cabinet meeting? 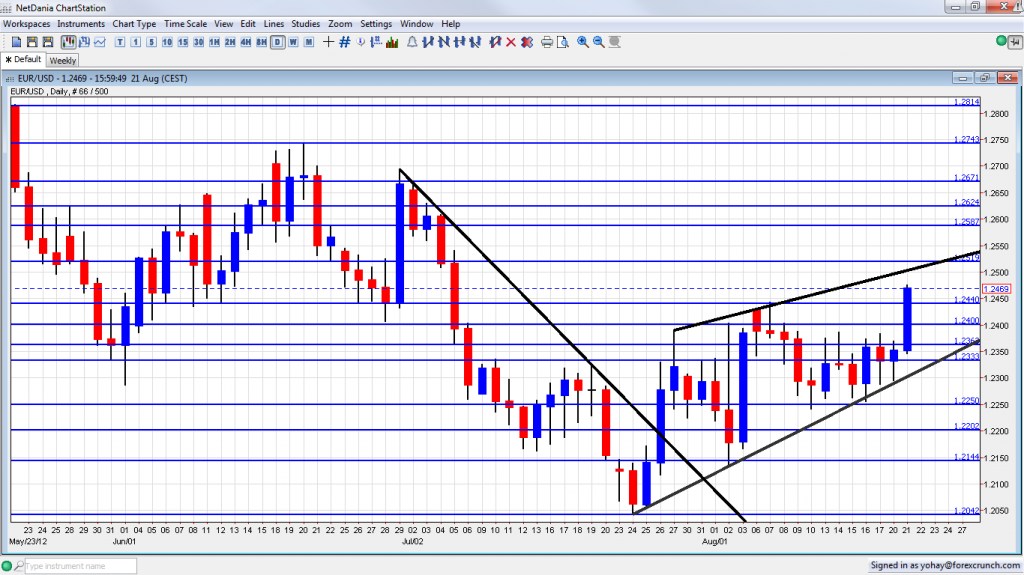 There are two German members on the ECB board: one is the head of the Bundesbank, Jens Weidmann, who opposes bond buys. But the other one, Jörg Asmussen, was conveniently on vacation during the last ECB meeting, has now expressed his support.

Asmussen is close to Angela Merkel, making his support even more important. In addition, the committees in the ECB made significant progress in setting up plans. Though there is a dispute about the details, the ECB is dead serious.

Yet, in the Blood Wedding of austerity, the Spanish bride still has to say “I do” – ask for aid  – a complete U-turn from previous statements. In addition, the move comes with “conditionality” – an unknown amount of more austerity, which Spain has already taken.

Spain already enjoyed the news from Asmussen: a bond auction for 12 and 18 months held earlier resulted in significantly lower yields than the previous one.

The Spanish government holds regular meetings on Fridays. These are often accompanied by announcements on new measures. Will Mariano Rajoy make the move?

For more on the euro, see the EUR USD prediction.

Get the 5 most predictable currency pairs
Previous ArticleGreed in Forex Trading
Next Article AUD/USD: Trading the Chinese Flash PMI Aug 2012