Euro/dollar starts the week with a big break: the pair started trading much lower, with a Sunday gap under uptrend support and below 1.30.

Election results in France and Greece are unfavorable for the euro. It managed to find support on low support. Where will this stop? Updates. 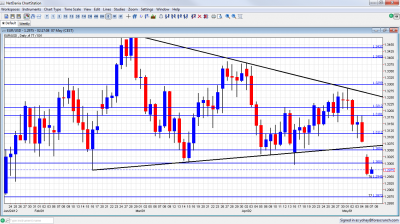 It then continued lower, breaking the round and important psychological line of 1.30 to find a bottom at 1.2955, close to support at 1.2945. This is the lowest since January.

After counting 85.41% of Greek votes, the two major mainstream, pro-bailout parties have a very slim majority in parliament: 151 seats out of 300.

This majority is thanks to the election law in Greece which grants the largest party 50 seats (or one sixth) before dividing the votes. New Democracy is in the lead with 19.4% and PASOK is third with 13.47%.

Nevertheless, parties that were quite marginal in previous elections are now in parliament, and the Greeks have spoken: more votes were granted for anti-austerity parties. The anti-austerity SYRIZA party came in second, before the PASOK party which won a landslide victory last time.

Forming a coalition will be hard to do, and passing new austerity measures required by the IMF for more funds will be even harder.

Uncertainty alone is bad for the euro, and a worsening of the Greek situation and an eventual euro-exit now looks closer.

See the analysis of the Greek situation.

As widely expected, socialist candidate Françios Hollande beat incumbent Nicolas Sarkozy with a slim majority. After counting 83% of the votes, the gap is around 2.5%: 51.3% for Hollande versus 48.7% for Sarkozy.

Even those this was widely expected, it marks a major shift in European policy, from austerity to growth. The market prefers the deficit cutting programs as a path for securing the bonds, even though these programs were self defeating so far.

All in all, it’s a bad night for the euro that enters a new era – a European Spring.

Get the 5 most predictable currency pairs
Previous ArticleAUD/USD: Trading the Australian Trade Balance
Next Article Greeks Voted Against Austerity, But Will They Get it