Euro/dollar fell from the narrowing channel it was trading in, and is challenging support. The Greek crisis is weighing on two fronts.

The demand of Finland to receive collateral for the participation in the bailout is one issue. The second issue is that Greece weighs on European banks’ profits.

A narrowing channel has emerged in recent days. The lines are seen on the graph. When downtrend support (currently just under 1.44) broke down, also the 1.4350 support line gave way, but this isn’t confirmed yet. The pair is currently around the line. 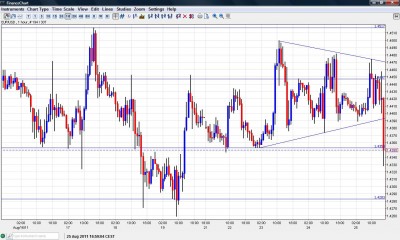 For more analysis and events, see the euro dollar forecast.

Finland is insisting to receive collateral for its participation in the Greek bailout. This is the result of the recent elections in the northern country. This has triggered appetite among other countries, including German officials, although they now say this is off the table.

If this rift continues, the next tranche of aid is endangered, and Greece may default. The political situation is still volatile.

Also the German LBBW bank is suffering due to Greek debt.

Earlier rumors on a credit rating downgrade for Germany were dismissed by all rating agencies, but the euro continues to lean lower.