Latest
You are at:Home»EUR/USD Daily»EUR/USD Feb 1 – Barrels Above 1.36 as German

EUR/USD continues to climb, as the pair pushed across the 1.36 level early on Friday. The pair is now at its highest level since November 2011. The euro received a boost from German Unemployment Claims, which posted their sharpest drop since last March. In the US, this week’s GDP and employment numbers were weak, and the markets will be hoping for better news from Friday’s key employment releases – Non-Farm Employment Change and the Unemployment Rate. As well, ISM Manufacturing PMI will be released. Back in Europe, Friday’s PMIs were within markets expectations. The markets will be keeping a close eye on the Eurozone Unemployment Rate, which will be released later in the day. 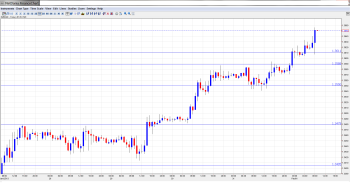 Euro/dollar climbs above 1.36 – click on the graph to enlarge.

Get the 5 most predictable currency pairs
Previous ArticleJob Gains of Over 200K Could Lead to Drops in
Next Article UK Manufacturing PMI: 50.8 in January