EUR/USD had a roller coaster week, flirting with low support only to come back as a winner. Industrial Production in Germany, France and the Eurozone as well as, the Eurogroup and ECOFIN Meetings are the major events this week. Here is an outlook on the main events and an updated technical analysis for EUR/USD, which is just under 1.30.

Last week, the European Central Bank left interest rates unchanged as expected. The roller coaster came during the press conference, where Draghi hinted about a rate cut, in May or June, but also provided a firm commitment to the euro project. The ECB still believes the Eurozone will strengthen this year, but will keep a close watch the economy, to see if conditions continue to worsen. In light of a monetary blitz from Japan and no near end in sight to QE in the US after the poor Non-Farm Payrolls report, the euro is certainly supported. 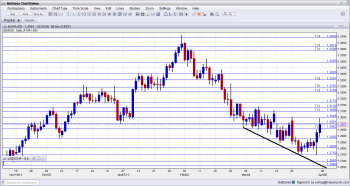 Euro/dollar began the week trading in a range, capped by the 1.2880 line (mentioned last week). Everything changed on Thursday, as Draghi sent the pair to dip just below support at 1.2750 (a 4.5 month low) only to swing higher. The 1.2960 line capped EUR/USD at first, but it eventually rose towards 1.3050 before closing just under 1.30.

1.34 was a stubborn cap during the spring of 2012 and continued its stubborn stance in January 2013 – the line now serves as resistance. These are the head and shoulders lines. 1.3350 was a peak in January 2013 and worked very nicely as support during February. The line is weaker now.

Below, 1.3290 served as resistance before the pair collapsed in May, After many failures to break higher, the euro finally pushed through. 1.3255 provided support during January 2013 and also beforehand. A recovery attempt failed to reconquer this line.

1.3170, which was the peak of September, served as support for the pair after the break in December and worked as strong resistance after the Italian elections. This is a key line, now on the upside. 1.3130 proved to be strong resistance during December 2012 showed its strength in March 2013 as well.

1.3100 is a minor line after working as temporary resistance in December 2012. It is followed by 1.3050, which capped the pair in early April and also had a role beforehand.

The very round 1.30 line was a tough line of resistance for the September rally. In addition to being a round number, it also served as strong support. It is becoming stronger. 1.2960 provided some support at the beginning of the year and also in September and October – the line is strengthening once again after working as a triple bottom. It remains an important line.

Lower, 1.2880 worked in both directions during 2012 and was the beginning of the uptrend support line. The recent breakdown turned the line into strong resistance. Lower, 1.2805 was the bottom border of the wide 1.2805-1.3170 that characterized the pair’s trading for a long time.

Below, 1.2750 worked as a separator of ranges during November, and stopped the pair’s drop in March. This is a key line on the downside, as clearly shown in the first week of April. This is followed by the round number of 1.27, which is minor as

A more important line is the trough of November 1.2660. 1.2624, which was a bottom in January 2012 is the next significant line, especially when looking at the weekly chart. Further below, 1.2587 is worth mentioning.

As shown on the graph (think black line), EUR/USD is sliding on downtrend support since late February. The pair escaped this line.

The euro is stuck in an ugly contest between the European issues on one hand, and the monetary easing from the US and Japan.

The new governor of the BOJ announced a very comprehensive plan to fight deflation, and this already hit the yen. It is expected to cause outflows from Japan and into the euro-zone among other regions. In the US, the picture has worsened: after signs of an accelerated recovery, we witness a significant slowdown that culminated in the disappointing jobs report.

However, things aren’t improving: repercussions of the crisis in Cyprus, a funding gap in Portugal, a delayed troika report in Greece, issues in Slovenia, a fear of a recession in Germany and an ongoing political crisis in Italy are all weighing on the euro-zone, which now suffers an unemployment rate of 12%. These two forces could balance each other in the coming week. A rate cut in Europe (which Draghi hinted about) could tip the weight towards a weaker euro later on.

If you have interest in a different way of trading currencies, check out the weekly binary options setups, including EUR/USD and more. Further reading: