Latest
You are at:Home»Forex News»EUR/USD Loses Channel As Greek Aid Drifts Away

Euro/dollar starts the week with a significant gap lower, below the channel that characterized its trade last week. The gap is more significant than last week’s.

The main reasons for the drop are the serious difficulties in securing the next tranche of aid for Greece. The meeting of finance ministers failed to make progress, and the troika just set a list of demands –  a long list. Worries about German banks also weigh on the euro.

EUR/USD now trades at 1.37, down from almost 1.38 on Friday. This big gap sends the pair not only below minor support, but also below the channel, as you can see in the chart.

For all the lines and the upcoming events, see the EUR/USD forecast. 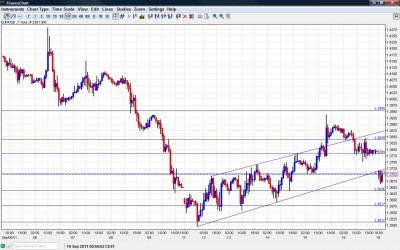 The EU / ECB / IMF “troika” set 15 specific conditions for Greece, including a cut of 100K jobs in the debt struck country. These measures might be approved by the politicians but are unlikely to be approved by the citizens. Prepare the tin hats.

In addition, we get some worrying news from German banks. According to a new assessment, German banks are under capitalized by €127 billion ($175 billion). The study by the German DIW institute joins worries about French banks and follows a rare step by the ECB, the Federal Reserve and 3 other central banks to provide dollar liquidity to banks, especially European ones.

This seems like a step towards a Greek default.

Do you think this will evolve into a ride higher from this low point, like last week? Or should be prepare for a bigger fall?