Latest
You are at:Home»Forex News»EUR/USD Near Confluence Line – Break or Bounce?

EUR/USD is trading in an uptrend channel. Uptrend resistance now coincides with a critical resistance line. Will it break higher or fall back? The confluence indicates that any move will be significant. 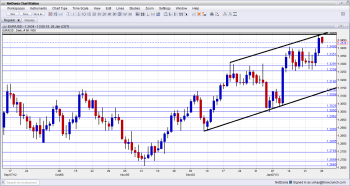 Uptrend support begins in early December, when the pair bounced off the 1.2880 line. This line was then flirted with around the turn of the year, when the pair traded around 1.30.

Uptrend resistance began a bit later in December, when the pair reached 1.33. After a breakout to higher ground, euro/dollar got close again, and then traded in a new, higher range, that was capped by 1.34.

After the breakout of 1.34, the pair touched uptrend resistance once again, peaking at 1.3476. This is just 10 pips away from a critical resistance line. 1.3486 was reached in February 2012, and was the highest level of the year.

At the wake of the new week, EUR/USD bounced off the highs and is trading at lower ground, 1.3430 at the time of writing. Uptrend resistance and the tough resistance line are in confluence, as seen on the chart.

Is it already bouncing from this meeting point? Or is it just consolidating at overbought territory before another surge higher?

Get the 5 most predictable currency pairs
Previous ArticleGBP/USD: 3 Reasons for the fall and the next levels
Next Article US Pending Drop 4.3% – Did the US Recovery Take a Break?