Latest
You are at:Home»Opinions»GBP/USD: At critical crossroads, next moves hinge on Boris’ reopening, Biden’s boost

Courageous cable – GBP/USD has finally hit the round 1.40 level in a mix of British of upbeat UK coronavirus statistics and a twist lower in the dollar amid yield-moving stimulus speculation. Both topics are expected to reach the climax in the last week of February, while economic data is set to have its time in the sun as well.

This week in GBP/USD: Optimism dominates

“It is because of the British variant” – that is the reason or excuse of several countries struggling to cope with COVID-19. In the UK, where this strain known as the Kent variant originated, victory seems to be at hand. Recent coronavirus infections, hospitalizations, and deaths are all falling sharply.

Is that a result of the rapid vaccination campaign – around a quarter of Brits have received one-shot – or the lockdown? The answer is irrelevant to investors, who only see a more significant and sooner return to normal. The pound has been benefiting from these prospects. 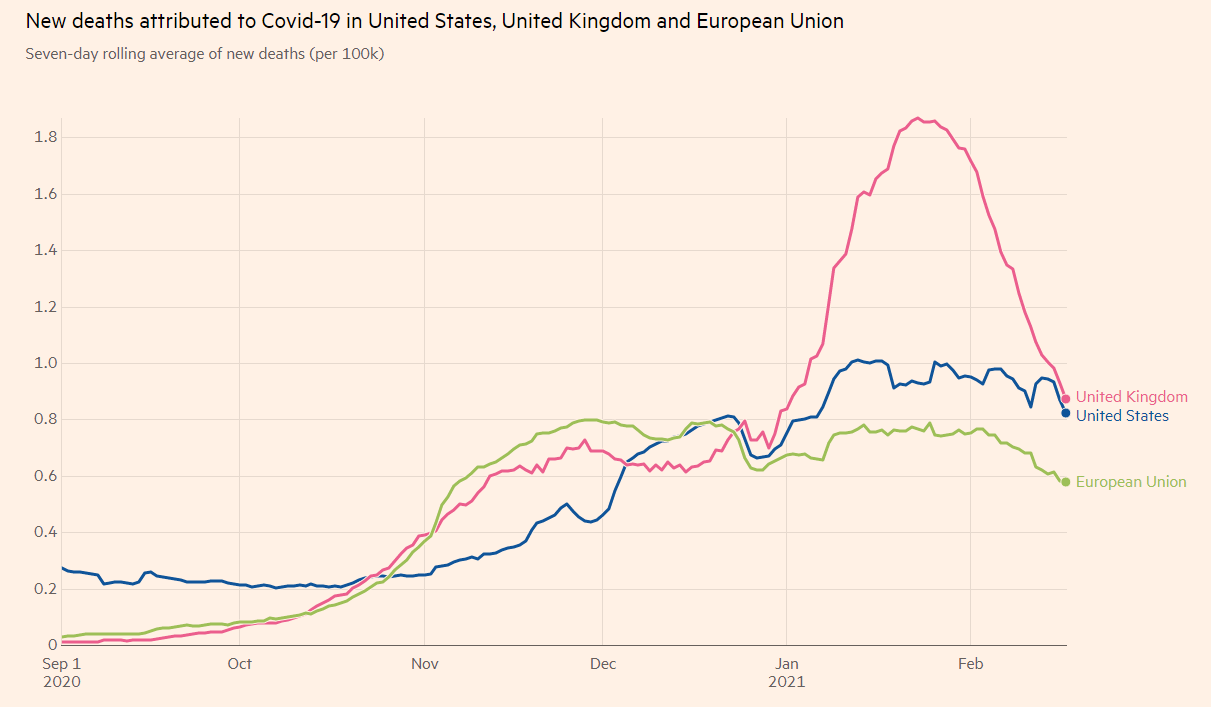 UK data was mixed. While Markit’s preliminary Purchasing Managers’ Indexes for February pointed to quicker recovery, January’s retail sales badly disappointed with a plunge of 8.2%. Markets did what they usually do – watch the future rather than the recent past.

An even more complicated contradiction was seen in the US. While retail sales leaped by 5.3% in January – smashing all estimates – the setback in jobless claims, which rose to 861,000, served as a reality check. The additional layer of complexity came from the reaction.

The disappointing unemp[loyment data implies a greater push for President Joe Biden’s covid relief package worth as much as $1.9 trillion. Earlier, upbeat consumption data lowered the chances for large fiscal support. Moreover, the dollar is torn between its role as a safe-haven and rising US Treasury yields. The sell-off in bonds supported the greenback, but hopes for robust global growth weighed on it.

What about the Federal Reserve? The world’s most powerful central bank contributed to a weaker dollar by stressing that it would see any inflation as transitory, reiterating its commitment to supporting the economy in its meeting minutes.

All in all, optimism has been driving GBP/USD higher in two steps forward, one-step backward fashion.

What will PM Johnson announce? Tensions are mounting ahead of Monday’s reopening speech as details as surprisingly scarce. Investors want more sectors to open sooner. The plan will likely consist of several stages and will likely depend on the pace of vaccinations and not solely on infections.

All coronavirus-related statistics remain relevant and that includes hospitalizations and also the number of people receiving the second dose – which the UK has been delaying for now.

On the other hand, the embattled leader has recently learned to lower expectations, and perhaps he will introduce a cautious and piecemeal approach. Such a move would trigger a “buy the rumor, sell the fact” response, sending sterling down.  Overall, the PM’s speech may determine the pound’s moves for the entire week.

The economic calendar features one more critical release – the jobs report. Britain’s Unemployment Rate has been gradually climbing but remains low due to the government’s successful furlough scheme.

Economists expect another rise from 5% to 5.1% in December. Average earnings are set to decelerate after picking up beforehand. The more up-to-date Claimant Count Change – aka jobless claims – is predicted to jump by 35K after barely budging in December.

US events: Will Congress approve stimulus?

Since two Democrats won special runoff elections in Georgia back in early January, investors have been following every move to push the $1.9 trillion covid relief package. The climax may come now – with a potential vote in the House on February 26. The ruling party only has a small majority in the lower house and the thinnest possible edge in the Senate.

Will the bill pass and provide support to the economy? Will it consist of most things Biden aims for? The sticking points are a gradual rise of the minimum wage and eligibility for $1,400 stimulus checks. Markets are less interested in the details but more in the total sum. Anything from $1.5 trillion or higher would be music to investors’ ears. A package closer to $1 trillion can be considered a disappointment.

Lawmakers may also be forced to delay the passage of the bill due to ongoing internal talks with moderate Democrats such as Joe Manchin of West Virginia or Kirsten Sinema of Arizona. It is safe to assume that no Republicans will come on board, meaning that Biden cannot lose any vote from within his ranks. Some of the current programs expire on March 14. and politicians tend to move around deadlines – making a postponement possible.

After the “deep freeze” storm, America’s vaccination may resume its acceleration. At the time of writing, the US reached around 12% of its population and remains on course to offer the jab to all Americans by the summer – unless additional setbacks occur.

One factor that may accelerate supplies is a potential approval of Johnson and Johnson’s single-shot vaccine. The Food and Drugs Administration (FDA) meets on Friday to discuss J&J’s solution and is likely to grant emergency authorization, allowing deployment in the following week. 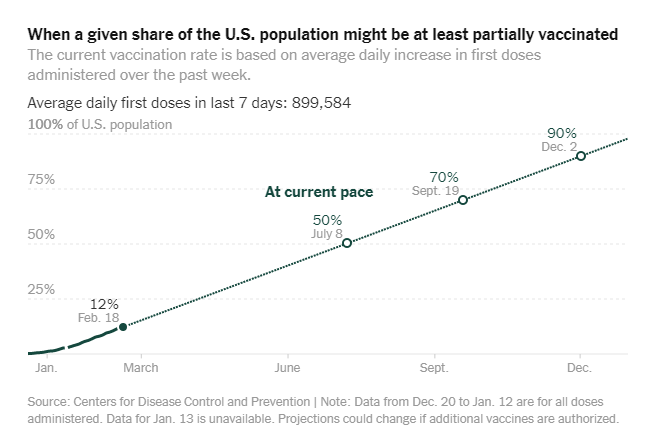 The economic calendar is packed in the last week of February. Housing figures and the Conference Board’s Consumer Confidence figures early in the week serve as a warm-up ahead of Thursday’s packed agenda. Updated Gross Domestic Product figures for the fourth quarter are forecast to be revised higher to 4.2% annualized.

Last but not least, weekly Jobless Claims are set to garner elevated attention after the unexpected increase in the past week. Continuing Claims are for the week ending February 12, when Nonfarm Payrolls surveys are conducted, giving them extra impetus.

On Friday, Personal Spending and Personal Income figures for January will likely show a bounce – a result of the previous $600 stimulus checks and other relief measures. 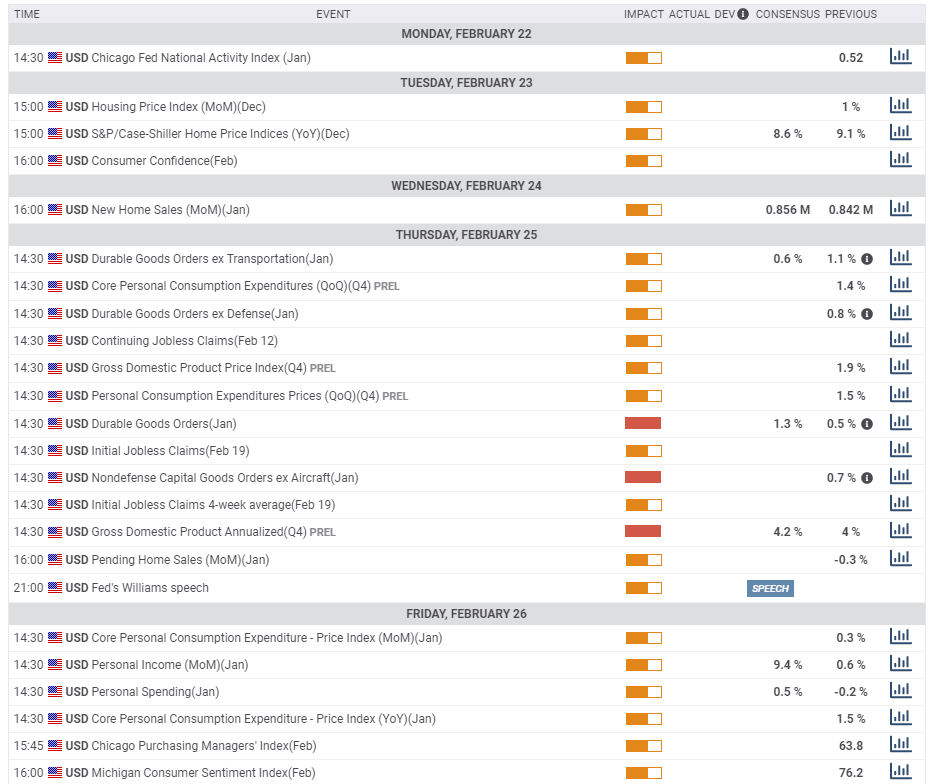 Pound/dollar has continued climbing within the broad uptrend but is nearing overbought conditions – the Relative Strength Index on the daily chart is nearing 70 and may indicate a more meaningful downside correction. However, upside momentum remains robust, and the currency pair trades above the 50-day, 100-day and 200-day Simple Moving Averages. All in all, bulls may prevail if they keep moving slowly higher.

At the time of writing, the new multi-year peak is 1.4018, which now serves as the immediate resistance line. The next noteworthy levels to watch date back to early 2018 and they include the February 2018 swing high of 1.4145, followed by 1.4255, which held cable down in March of that year. Further above, 1.4370 is the upside target.

Below 1.40, significant support awaits at 1.3830, which provided cushioned the currency pair in mid-February and also played a role in 2018. It is followed by 1.3750, which was a stubborn cap in January, and then by 1.37, which held cable down earlier last month. Further down, 1.3566 was a swing low a few weeks ago and may come into play.

Pound/dollar may have more room to run in response to the UK reopening and US stimulus. However, that may trigger a “buy the rumor, sell the fact” response which could trigger a deeper correction within the long-term uptrend.

The FXStreet Forecast Poll is showing that experts are not buying the current rally – they foresee sub-1.40 levels on all timeframes, with the lowest average target being in the medium term, while the poll is pointing to an upgrade of short-term predictions. 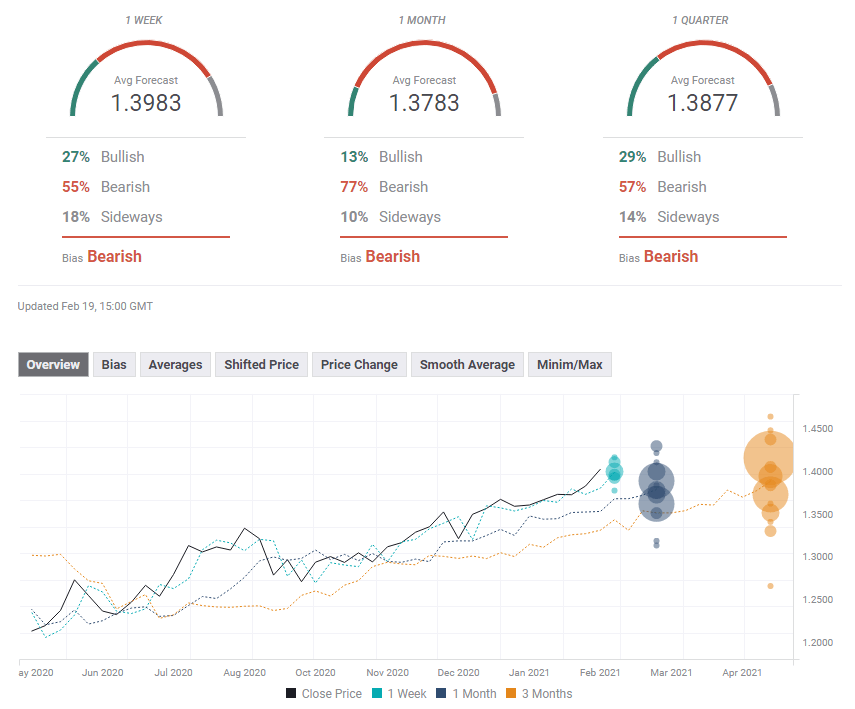 Get the 5 most predictable currency pairs
Previous ArticleFed’s Rosengren: Economy could face difficult road ahead over next few months
Next Article Elrond Price Forecast: EGLD poised for a 70% breakout as it sets foot in the DeFi space