Boris gave, Powell took it away – UK Prime Minister Boris Johnson agreed to compromise on the controversial Brexit bill and sent the pound higher before the Federal Reserve boosted the dollar. Politics are set to outweigh economic figures in rocking the pound in the last full week of September.

This week in GBP/USD: Brexit hopes vs. Fed fallout

Brexit: The controversial Internal Markets bill passed its first hurdle in the House of Commons, initially sending down the pound. The legislation knowingly violates the Brexit Withdrawal Agreement that PM Johnson signed with the EU last year. Investors feared that negotiations would imminently collapse. An insufficient amount of Conservative Party “rebels” voted against the bill.

However, the PM later reached a compromise with these rebels, agreeing to grant parliament a greater oversight role over applying the law. The news has pushed the pound higher, yet Brussels has yet to respond. It seems that EU officials are waiting to see the text of the modified bill – or perhaps holding their criticism before it turns into law.

On the other hand, Chief EU Negotiator Michel Barnier said there is a “glimmer of hope” on the politically sensitive fisheries issue, providing support to sterling. Moreover, European Commission President Ursula von der Leyen said she is “convinced” a deal is still possible.

Then came the central banks, both downing cable. The Federal Reserve signaled it would leave rates unchanged through 2023 – but refrained from offering any imminent support despite conveying a message of concern and uncertainty. The Fed expects a softer contraction in 2020 but a shallower recovery in 2021.

Jerome Powell, Chairman of the Federal Reserve, seemed to throw the ball into lawmakers’ court without acting. Stocks dropped and he safe-haven dollar advanced.

Indeed, the chances for additional fiscal stimulus have risen after the US reported weak retail sales figures for August. Reports on Capitol Hill suggest a package worth $1.5 trillion is cooking.

Contrary to the Fed, the Bank of England does intend to act – potentially by setting negative interest rates. The minutes from the BOE’s meeting revealed that the bank is testing the effectiveness and the implementation of such a move. Sterling dropped sharply. The BOE also expressed worries about the economic outlook amid Brexit uncertainty and the rise in virus cases.

Cases are on the rise in the UK, prompting new restrictions in the northeast. Fortunately, mortalities remain at low levels, at least when comparing to the US.

UK data was mostly upbeat, with jobless claims rising by 73,700, less than estimated, while headline inflation rose by 0.2%, also above expectations. The unemployment rate edged up to 4.1% in July, as expected, yet that hinges on the ongoing implementation of the furlough scheme.

As recent volatility has shown, sterling is becoming more sensitive to what happens after the Brexit transition period expires at year-end. Parliament is set to approve the Internal Markets Bill during the week, and markets will focus on the EU’s response. If talks collapse, the pound would tumble, while attempts to reach a compromise would boost it.

BOE officials may have the chance to clarify their intentions in Westminster hearings or in interviews. How determined are they to set negative rates? How close is the move? The pound may rock on any hint from Governor Andrew Bailey – who has scheduled speeches – or any other member of the Monetary Policy Committee.

Rishi Sunak, the Chancellor of the Exchequer, has yet to announce what would replace – if at all – the furlough scheme which expires next month. The specter of mass UK layoffs is worrying about the nation and markets.

A gradual tapering of the scheme is likely, but without details, sterling could suffer. The longer and the more generous the gradual retreat from the program is, the better for the economy and the currency.

Markit’s preliminary purchasing managers’ indexes for September are projected to show an ongoing recovery, with statistics for the services and the manufacturing sectors printing well above 50 points – firmly in growth territory. Any slide toward this breakeven level could show investor fear and result in a weaker pound.

The Fed already announced its last pre-election decision, yet Chairman Powell may still move markets via public appearances – and so can his colleagues. Hints about expanding the bond-buying program may boost markets and weigh on the dollar, while urging elected officials to agree on fresh relief would weigh on stocks and boost the safe-haven greenback.

At the time of writing, Democrats and Republicans are still playing the blame-game and seem to get no closer to an accord. However, a group of moderate self-proclaimed “problem-solvers” may present a deal that the parties’ bigwigs may eventually accept. The larger and the faster a deal arrives, the better for equities and for GBP/USD. Ongoing accusations could weigh on cable.

The bigger political battle is for the White House. While President Donald Trump has somewhat narrowed his lead in national polls, Biden looks stronger in several critical battleground states. According to FiveThirtyEight, he has a 76% chance of replacing the incumbent.

The Economist’s model shows better chances for the Democrat – 86% at the time of writing. Both models have hardly changed in recent weeks and seem to show that the conventions had little or no effect.

Markets fear a contested election in which Trump declares victory on election night, ahead of the slow count of mail-in ballots. Later, Biden could be declared the victor but Trump would call it – like now – fraud. A constitutional crisis would significantly hurt business and consumer confidence.

Growing fears and tensions ahead of the first debate on September 29 could weigh on markets and boost the dollar.

Several housing figures are of interest during the week, yet the most significant publication awaits traders on Friday – durable goods orders for August. Has the lapse of government aid weighed on investment? That is an open question.

Continuing claims for the week ending September 11 are also of interest, as that is when the Non-Farm Payrolls surveys are conducted.

Overall, battles on fiscal stimulus and for the White House are set to dominate, with economic releases playing only second fiddle.

Pound/dollar continues suffering from downside momentum on the daily chart and has failed to top the 50-day Simple Moving Average. However, it bounced off the closely-watched 200-day SMA. The Relative Strength Index is balanced – and the general picture is mixed.

With plenty of time until the Brexit deadline, a deal is unlikely to be struck soon, weighing on the pound. Rising US political tensions could boost the dollar. Overall, there is room for the cable to fall.

The  FXStreet Forecast Poll  is showing that investors are seeing a moderate uptrend in the next week and cable topping 1.30 in the next month. However, they are somewhat bearish on the long-term move. While the short-term target has been upgraded, it seems that experts are waiting for further developments before changing other targets. 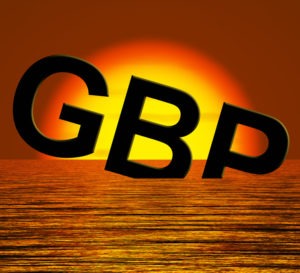 GBP/USD advanced on hopes for a Brexit compromise but suffered from the Fed. A critical vote in parliament, UK PMIs, and US figures are eyed. Late September's daily chart is painting a mixed picture. The FX Poll is pointing to a bullish outlook in the short and medium terms before a fall later. Boris gave, Powell took it away - UK Prime Minister Boris Johnson agreed to compromise on the controversial Brexit bill and sent the pound higher before the Federal Reserve boosted the dollar. Politics are set to outweigh economic figures in rocking the pound in the last full…