Is 1.36 the next stop for GBP/USD? The trend is undoubted to the upside, yet a short-term correction cannot be ruled out. Brexit continues dominating sterling’s trading, overwhelming other developments such as central bank action on both sides of the pond.

Where do talks stand? EU and UK negotiators remain quiet – a positive sign of progress – and also offer fewer leaks from the talks. The picture that is emerging is of substantial progress – if not an outright agreement – on the thorny Level-Playing Field. A breakthrough became possible after UK Prime Minister Boris Johnson allowed for alignment mechanism with EU rules.

The focus is now on fisheries – both Johnson and European Commission President Ursula von der Leyen have escalated their rhetoric on Wednesday, vowing to defend the rights of fishermen. The minuscule sector is politically sensitive as fish, contrary to regulations are visible, and as fisheries were highlighted in the EU Referendum. France and other European countries have reportedly toughened their stance on the topic as well.

Nevertheless, if there is a will, there is a way. The Brexit transition period expires in two weeks and Christmas is right around the corner. Both sides have the interest to strike a deal – but may put up one last fight for their domestic audiences before reaching an agreement. Such a last-minute row could hit sterling and serve as a buying opportunity. Any headline is set to rock the pound.

Outside the Brexit bubble

The Bank of England is projected to leave its policies unchanged in its last meeting of 2020 after boosting the bond-buying scheme by £150 billion in November. The BOE does not release a quarterly report nor hold a post-event press conference, but will likely commit to doing whatever is necessary to support the economy. As long as it refrains from hinting at setting negative rates, the “Old Lady” is likely to provide a dose of support to sterling.

The BOE announces its decision less than 24 hours after the US Federal Reserve concluded the year without any policy changes but with a new commitment to continue Quantitative Easing until “substantial progress” is seen. The pledge joins its signal to leave interest rates at zero through 2023.

Markets were initially disappointed with the lack of imminent stimulus but were encouraged by Chairman Jerome Powell’s overall dovish message. The bank reiterated its call for additional fiscal stimulus, with Powell stating the case is “very strong.”

Lawmakers on Capitol Hill have expressed optimism on agreeing on a relief package which President-elect Joe Biden described as a “down payment” ahead of additional spending under his rein. Talks could result in an accord as early as Thursday.

US jobless claims are on the docket and they are set to drop after jumping last week. Another sign of weakness in the world’s largest economy came from November’s Retail Sales figures, which fell by 1.1%, worse than expected.

See US Initial Jobless Claims Preview: Not the right direction at all

The background is the coronavirus’s rage which is taking a toll on activity. On the other hand, optimism about a vaccine – the FDA is set to approve Moderna’s jab in the coming days – is boosting sentiment, as seen in forward-looking Purchasing Managers’ Indexes for December.

All in all, Brexit remains the dominating theme, with other developments being mostly positive for pound/dollar. 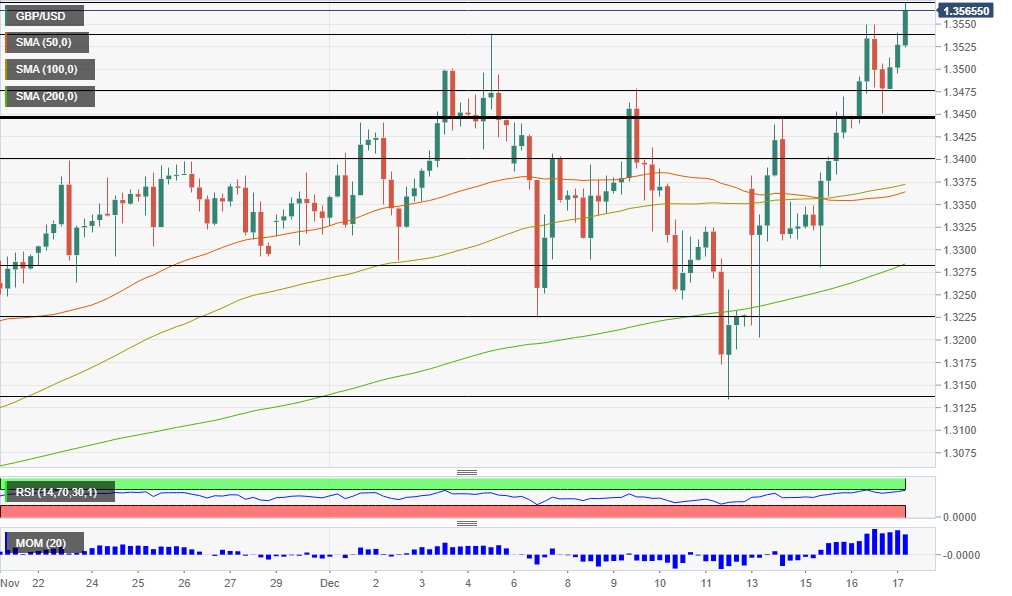 The Relative Strength Index on the four-hour chart is flirting with 70 – entering overbought conditions. While a Brexit deal would make the RSI obsolete, a short-term correction is on the cards. Momentum remains to the upside and GBP/USD holds above the 50, 100 and 200 Simple Moving Averages. All in all, any correction would allow for further gains.

Get the 5 most predictable currency pairs
Previous ArticleEUR/USD targets the 2018 peak at 1.2556 – Commerzbank
Next Article EUR/USD clings to gains near 1.2230-35 region, highest since April 2018