Latest
You are at:Home»Opinions»GBP/USD: Critical data to if sterling surrenders to dollar strength

Little time for partying – St. Patrick’s Day has resulted in a short-lived upswing in cable in response to the Fed, with a quick hangover. US yields remain in the spotlight for markets and they are set to be influenced by new US stimulus, final GDP and other data. In the UK, a vaccination slowdown, jobs, inflation and retail sales figures are of interest.

This week in GBP/USD: Fed whipsaw

I’ll believe it when I see it – that may sum up the Federal Reserve approach to a bounce in employment and inflation. The world’s most powerful central bank is now “outcome-based.” It will first want to see a bounce in the rearview mirror before even signaling a slowdown in bond-buys nor interest rate hikes. The Fed’s dot-plot shows borrowing costs will rise only in 2024.

The dovish approach sent the dollar down, but the move ground to a halt as Treasury yields resumed their rise. The Fed did not push back against higher returns on long-term debt, and investors remain concerned the bank may have to hike sooner rather than later.

See Fed Analysis: Dovish dots down dollar, why this may be a buy opportunity

How did GBP/USD perform in response? While sterling retreated from the highs, it held onto most of its gains – driven by an improving UK economy and an upbeat Bank of England statement.

The BOE also acknowledged progress, from better global growth to expectations for upbeat consumption in the UK. On the other – and similar to the Fed – the “Old Lady”wants clear evidence of progress on inflation before tightening.

See BOE Analysis: Bailey hits sterling with “I’ll believe it when I see it” Fed-style move, will it last?

Coronavirus infections remain depressed on both sides of the pond, contrary to developments in Europe. 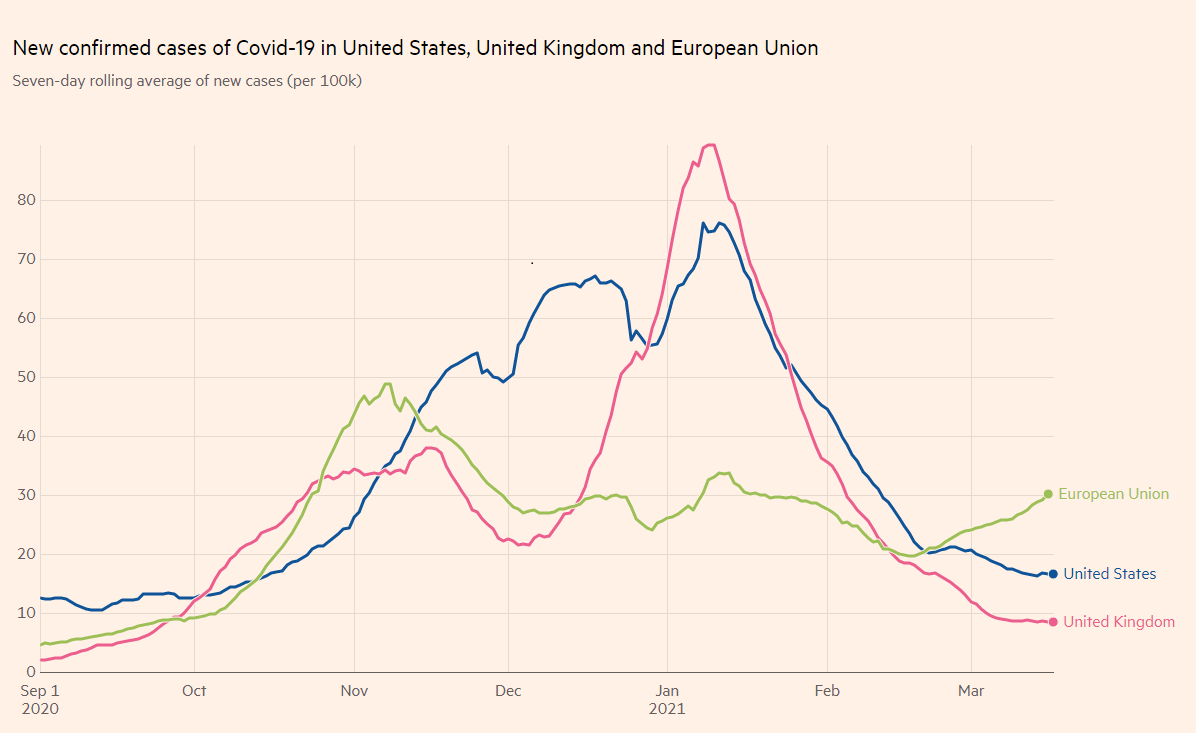 On the other hand, Britain announced it would have to slow down its vaccination campaign due to strains resulting from “inbound” supplies. The EU has been intensifying its threats to halt doses sent to the UK as it struggles to distribute vaccines to its population. Sterling shrugged off any potential delays as a significant portion of the population received doses.

US data was mixed and overshadowed by the Fed. Retail Sales tumbled by 3% in February but came on top of an upward revision for January and on the backdrop of the “deep freeze” storms.

Around 38% of Brits have received at least one vaccine dose – and only 2.6% the second dose. With supplies now slowing, the government has shifted to prioritizing second jabs for the vulnerable. As the chart below shows, the UK is advancing in the second round, yet there is still room to go. 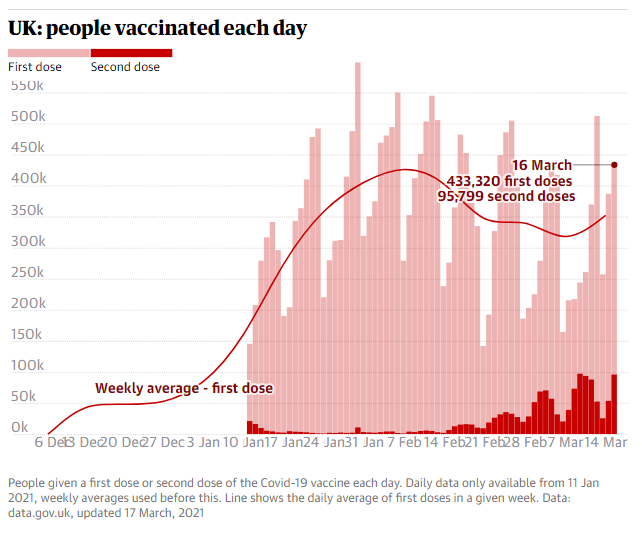 Additional progress would be positive for the pound and a near-halt would cause concern. EU-UK frictions around movements of doses from one side of the Channel to the other have mostly hurt the euro. However, if concerns around AstraZeneca’s vaccines snowball, the pound would suffer as well.

The economic calendar is busy in the last full week of March. Economists expect the Unemployment Rate to have remained stable in January at 5.1%, amid ongoing support from the government’s furlough scheme. Wage growth is also projected to remain robust. As the first reopening came only in March, material changes in jobless claims for February are unlikely.

With the BOE talking about inflation, the Consumer Price Index statistics for February will garner more interest. The calendar is pointing to a small decline in headline CPI.

After overseeing the recent rate decision, Bank of England Governor Andrew Bailey will have time for several public appearances and may hint about future policy. Any comments on yields will be of growing interest as Gilts remain on the rise.

Markit’s preliminary Purchasing Managers’ Indexes for March may show an increase in the services gauge, as Britain began reopening early in the month. The manufacturing sector will probably continue growing at a satisfactory pace.

Last but not least, Retail Sales figures for February are projected to show another month of declines, amid the ongoing lockdown last month. Perhaps there is room for an upside surprise as hope for a return to normal was already in the air, and may have impacted consumers. 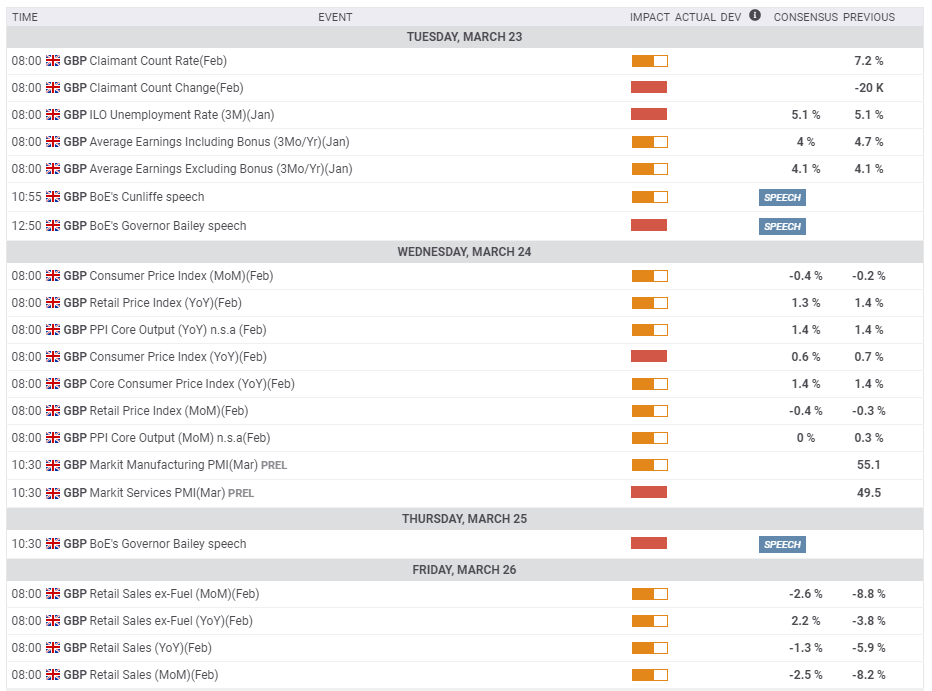 The distribution of stimulus checks from the $1.9 trillion coronavirus relief package is yet to conclude – but additional expenditure is already in the works. The White House is mulling a large infrastructure spending bill. If more details come out, it could push yields higher and carry the dollar with it. On the other hand, if President Joe Biden focuses on other policies such as voting rights, the bond sell-off could take a break.

America’s vaccination campaign continues moving at a rapid clip, with around 23% of the population having already received one shot. The timetable for reaching the majority of the population has squeezed with the US set to reach the 50% mark by mid-May. Ongoing progress would boost the dollar while any potential setbacks would do the opposite. 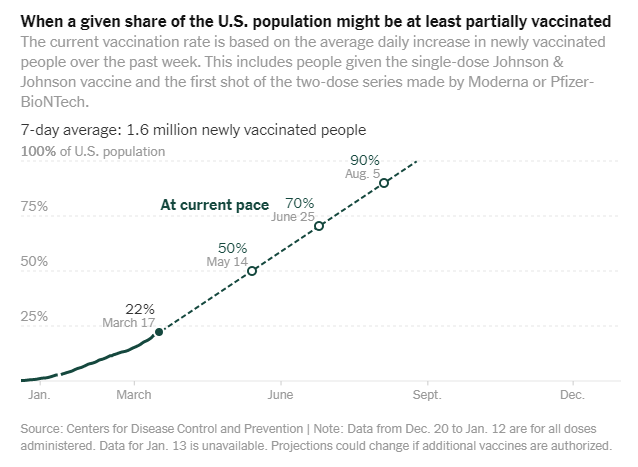 The economic calendar is packed with events.  Federal Reserve Chair Powell will have additional opportunities to impact markets with no fewer than three speeches. A handful of his colleagues will also be doing the media rounds. Any comments on yields will be closely watched, and so will remarks on the economy. Hints of early tightening would cause jitters, but Fed officials will likely refrain from going down that route.

Durable Goods Orders for February provide insights on investment and are projected to continue rising, as government stimulus was in the works last month. That release is due on Wednesday.

On Thursday, Final Gross Domestic Product figures for the fourth quarter will likely confirm an annualized increase of 4.1%, but this relatively stale figure will probably be overshadowed by weekly jobless claims. Applications jumped to 770,000 and will likely drop.

The Fed’s preferred measure of inflation, Core Personal Consumption Expenditure, is released on Friday, with economists foreseeing no change from the tame 1.5% level recorded in February. 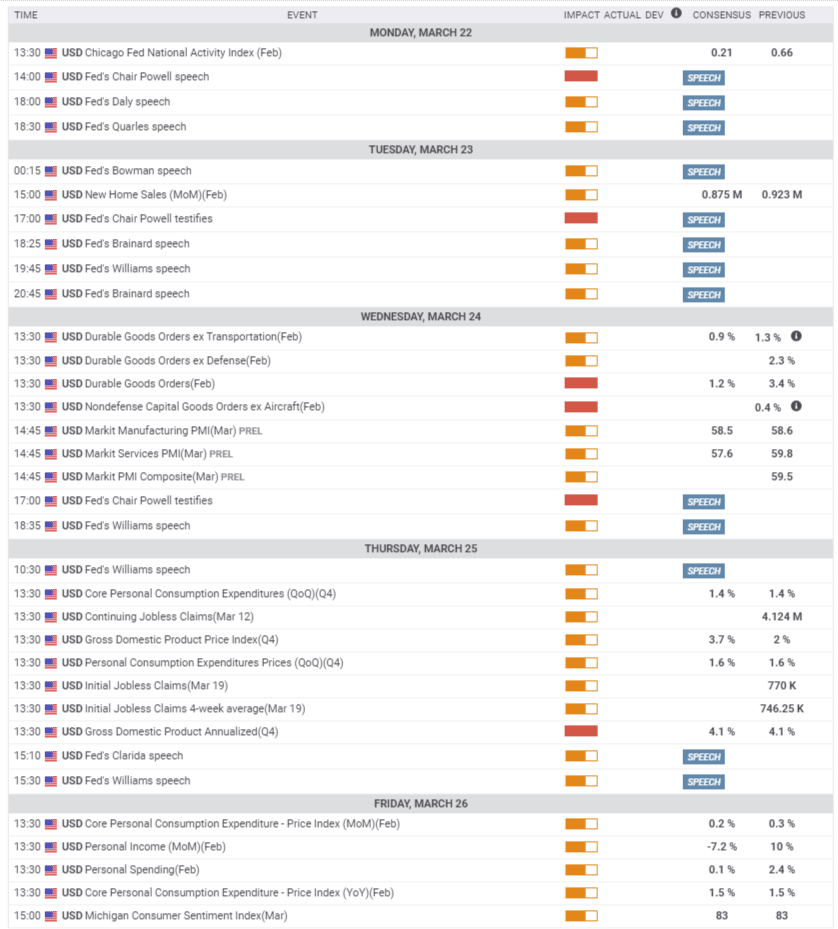 Pound/dollar continues trading in the broad uptrend channel and also holds above the 50-day Simple Moving Average (SMA). However, the recent jitters have pushed momentum to the downside, a bearish signal.

Critical support awaits cable at 1.3775, which capped the pair in late January and then served as support in early March. It is defended by 1.3810, a cushion from mid-March. Further down, the next significant support line is only at 1.3565. 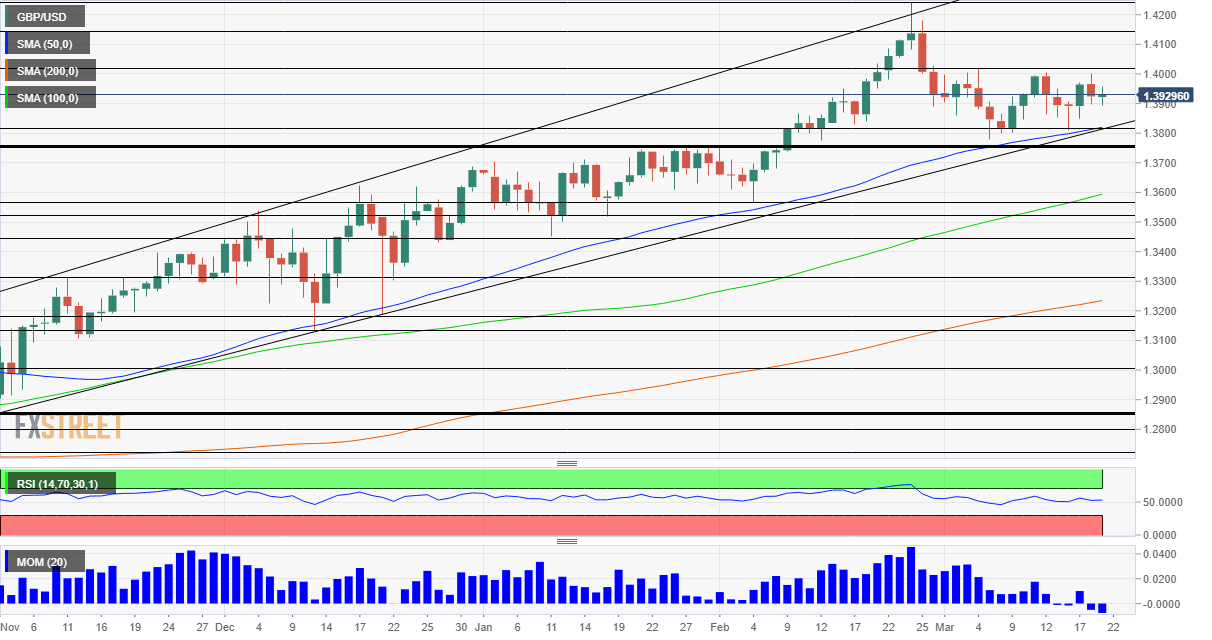 With growing expectations for a roaring US economy, it is hard to see sterling resist the greenback for much longer.

The FXStreet Forecast Poll is showing that experts foresee cable continuing its muddling below 1.39 in the short and medium terms before becoming bullish afterward and topping that line. The latter average target has been downgraded in comparison to the previous week, while the short-term outlook is little changed. 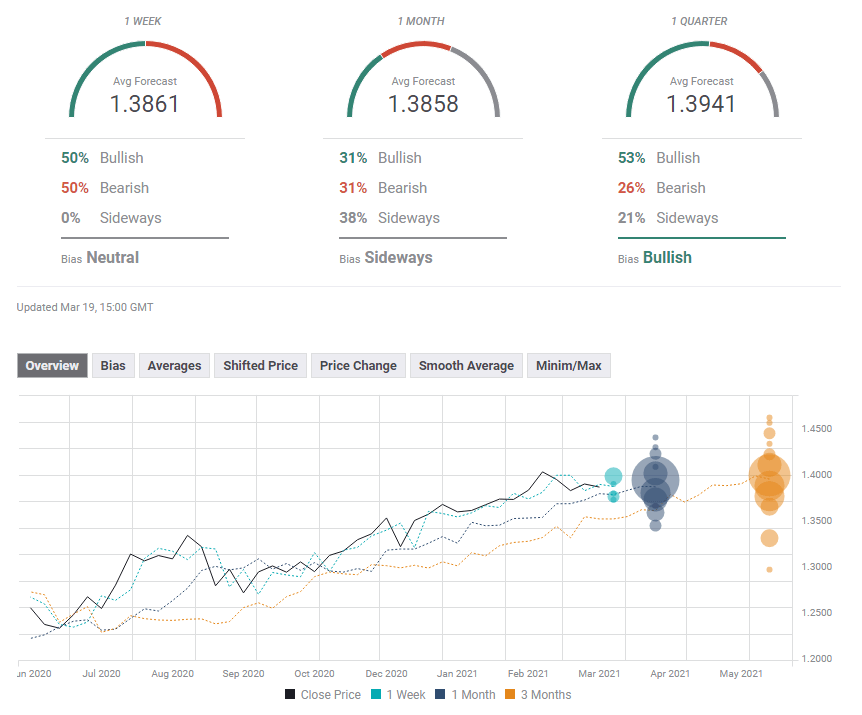