GBP/USD: Fishing for a Brexit deal set to succeed, allowing for cheerful gains

The EU and the UK leveled up the pound with Level-Playing Field progress – and now it is down to fish to seal a Brexit deal. Apart from the incesant noise of headlines from the talks, investors may have time to take stock of a turbulent end to 2020 in the short holiday week.

Every Brexit headline has had the power to propel the pound higher or pummel it. Comments from the talks in Brussels and from officials in London have generally moved in a positive direction. UK Prime Minister Boris Johnson allowed for a breakthrough on the thorny Level-Playing Field issues by allowing for a mechanism that ties both sides to any changes in rules.

While the details remain unclear – negotiators are relatively quiet, which is a good sign – the advances have pushed the pound higher. Both sides also seem to agree on governance, leaving only on open topic – fish.

The minuscule fisheries sector is a visible one and a politically charged one – havng an outsized role in the 2016 EU Referendum in the UK. For France and several other countries, having access to British waters is also a critical issue. Both sides have clashed over the topic, eroding cable’s gains and leaving allowing for a correction ahead of the weekend.

There have been additional twists and turns in the saga with large movements. Zooming out allows seeing the growing chances of an accord reflected in the price.

US Stimulus: Similar to Brexit, Democrats and Republicans have moved forward toward agreeing on a relief package worth $900 billion. Contrary to deliberations in Brussels, America’s politicians decided to set aside thorny issues – aid to states and liability waivers.

A breakthrough became possible once Senate Majority Leader Mitch McConnel leaned into the talks following his acknowledgement of Joe Biden as the winner of the elections. After the Electoral College ratified Biden’s victory, the focus fully shifts to Georgia’s special elections. Another dissimilarity with EU-UK talks is that while some differences remain, the optimistic rhetoric prevails on both sides of the isle.

Central banks on both sides of the pond announced their final decisions of the year. The Federal Reserve refrained from announcing an immediate increase to bond-buying, initially disappointing markets and sending the safe-haven dollar up. However, when Jerome Powell, Chairman of the Federal Reserve, reaffirmed his openness to do more if needed, markets found comfort and the dollar resumed its falls.

The Bank of England’s last event of the year was somewhat more muted. The bank only extended one of its lending schemes and acknowledged that the vaccines decrease downside risks.

UK coronavirus cases continued rising at a disturbing pace, and most alarmingly, it most matters for markets – London. One of the world’s financial capitals entered severe Tier 3 restrictions, somewhat weighing on sterling. On the other hand, the government has recommitted to its plan to allow looser restrictions around Christmas – a policy that has been criticized by the medical society and the opposition.

New York City has yet to suffer from new curbs, but a shutdown is officially on the cards. COVID-19 is also raging in California, another economic powerhouse.

Covid infections in the US, the EU, and the UK 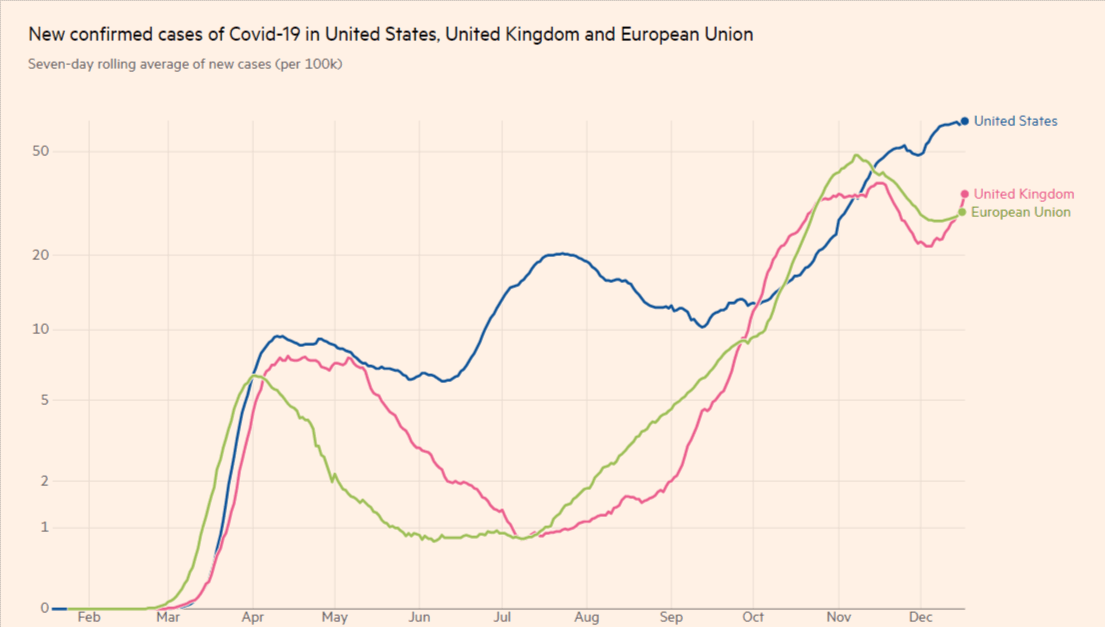 On the other hand, the US joined the UK by administering the Pfizer/BioNTech vaccine, in a process that is progressing smoothly. The US Food and Drugs Administration (FDA) has given the nod to Moderna’s jabs.

US Retail Sales badly disappointed with a drop of 1.1% in November – coming on top of a downward revision for October. Weekly jobless claims jumped to 885,000, also adding to near-term concerns.

In the UK, inflation data missed estimates with only 0.3% yearly, yet the Unemployment Rate remained below 5%, an encouraging development. Markit’s December Purchasing Managers’ Indexes in the US were bullish while those in the UK pointed to a slowdown in the services sector.

While data was top-tier, it played second fiddle to politics and central banks.

UK events: Getting ready for Brexit

Brexit: Less than a fortnight remains until the transition period ends and both sides are highly interested in a deal. The EU and the UK may reach an agreement by the European Parliament’s Sunday deadline – or afterwards. Many dates have come and gone. December 31 is the only genuine cutoff date – and even it could be pushed back with creativity.

The bloc’s bureaucrats are experts at cooking “fudges” – complex agreements that cause work for these officials and keep all sides happy and able to declare victory. At this point, it would probably take a French compromise on fish to sign of on an accord – but for markets it will not matter. Any deal is a good deal.

How will sterling react? The most recent setback is a sign that there is more fuel in the tank. GBP/USD could move higher on the appearance of white smoke in Brussels, and move higher before correcting lower. The downside risk is greater. If talks break down, there is substantial room to the downside as a deal is mostly priced in.

Vaccine developments: After the US approves Moderna’s vaccine, British authorities will likely follow and deploy another weapon against coronavirus. Investors are still awaiting more news from AstraZeneca and the University of Oxford, which have confused markets with mixed data. The UK ordered more doses of the homegrown vaccine than any other ones.

PM Johnson is under opposing pressures ahead of Christmas – to tighten the screws as the medical experts demand and potentially weigh on the pound, or continue with current plans. Similar to several other countries, Britain allows exceptions around the festive days. In the greater scheme of things, most of the country is under strict Tier 3 restrictions and that is unlikely to change for several weeks.

The economic calendar is light ahead of the holidays, with final Gross Domestic Product figures for the third quarter likely confirming the considerable bounce from the dark days of the first covid wave.

Stimulus: Talks between Republians and Democrats are set to continue over the weekend and potentially conclude before markets open. Failure to reach a  quick accord would likely weigh on markets, but both sides seem on keen on sealing a deal before Christmas. Any boost before the new administration settles in would be market positive/dollar negative, but mostly priced in.

Georgia special elections: The political focus shits south to the special run off elections in the Peach State. Early voting has already begun and with the presidential elections settled and potentially a done deal, fresh opinion polls from Georgia could markets. Investors prefer Democrats to clinch a minor majority in the chamber, allowing for more stimulus.

Virus figures are unlikely to improve until sometime in January, and reports about full Intensive Care Units and lockdowns could hurt sentiment. After the drop in consumption, an updated look at investment stands out on the economic calendar. Durable Goods Orders figures for November are set to advance, yet at a slower pace than October.

The final GDP report for the third quarter is already deep in the rearview mirror and all likely confirm the whopping bounce of 33.1% annualized. Jobless claims remain in the spotlight after the worrying increases while Personal Income and Personal Spending statistics for November are also of interest. 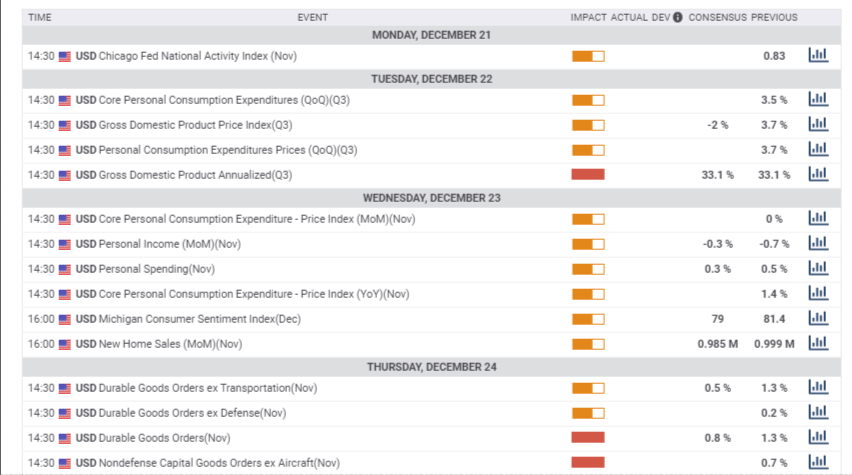 Pound/dollar is trading below an uptrend resistance align that has been accompanying the pair throughout the autumn and leaves some more room to rise before the pair hits it. The Relative Strength Index on the daily chart is close to 70 – on the verge of overbought conditions and implying limited gains as well.

Other indicators such as momentum and the Simple Moving Averages point higher. All in all, the uptrend is set to continue, albeit not at a rapid pace. 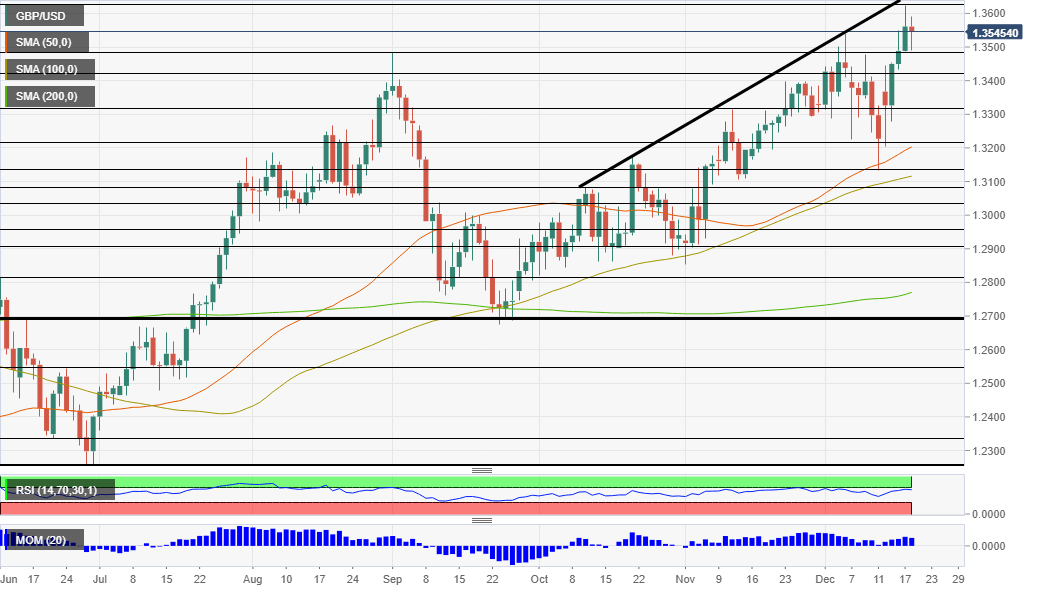 The EU and the UK need a deal and will most probably reach the finish line before Christmas, allowing for more gains. Other factors such as US stimulus and vaccine hopes will likely add to the upside.

The  FXStreet Forecast Poll  is showing that experts see short-term gains, then falls – potentially related to the immediate aftermath of Brexit – and then a swing higher. The near and medium term targets have been upgraded whle the long-term one is little changed. The wide variety of targets reflects higher volatility and growing uncertainty. 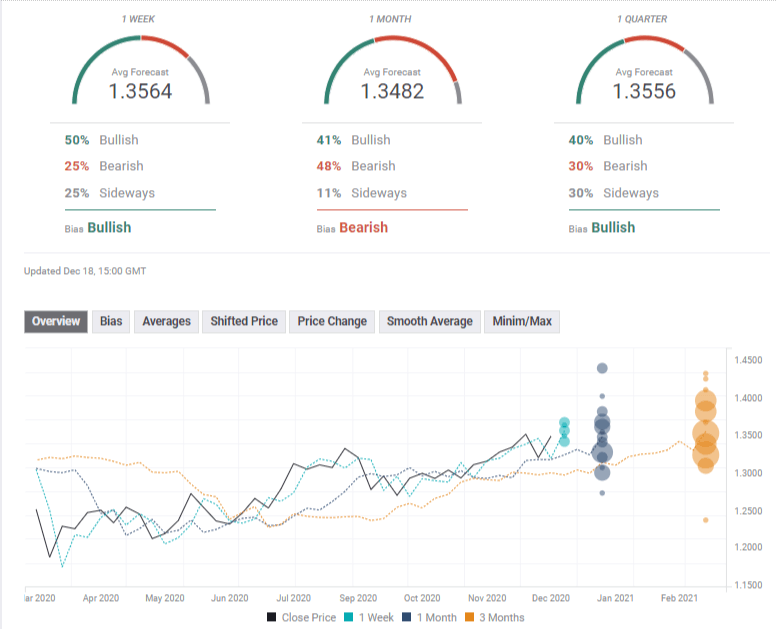 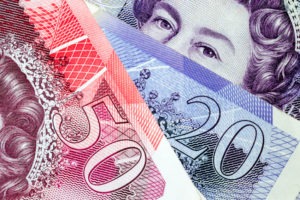 GBP/USD has been extending its gains amid optimism for a Brexit deal. The week including Christmas, may see markets digesting the news and readjusting. Late December's daily chart continues painting a bullish picture.   The FX Poll is pointing to short-term gains and a drop afterward. The EU and the UK leveled up the pound with Level-Playing Field progress - and now it is down to fish to seal a Brexit deal. Apart from the incesant noise of headlines from the talks, investors may have time to take stock of a turbulent end to 2020 in the short holiday week.…