Home » GBP/USD: Is the correction over? US consumer, vaccines hold keys

GBP/USD: Is the correction over? US consumer, vaccines hold keys

The dollar has won the “ugly contest” with the pound – profit-taking and vaccine issues have weighed on the pound more than Fed-related vulnerability has hurt the greenback. Immunization remains central to markets, while US Retail Sales, Inflation and Consumer Sentiment are eyed as well.

This week in GBP/USD: Sterling suffers more than the dollar

Back to the bars: Prime Minister Boris Johnson announced that pubs, gyms and other places would reopen on April 12, initially giving sterling a boost. The move comes as Britain’s COVID-19 cases continue falling and while US infections have plateaued following a minor upswing. 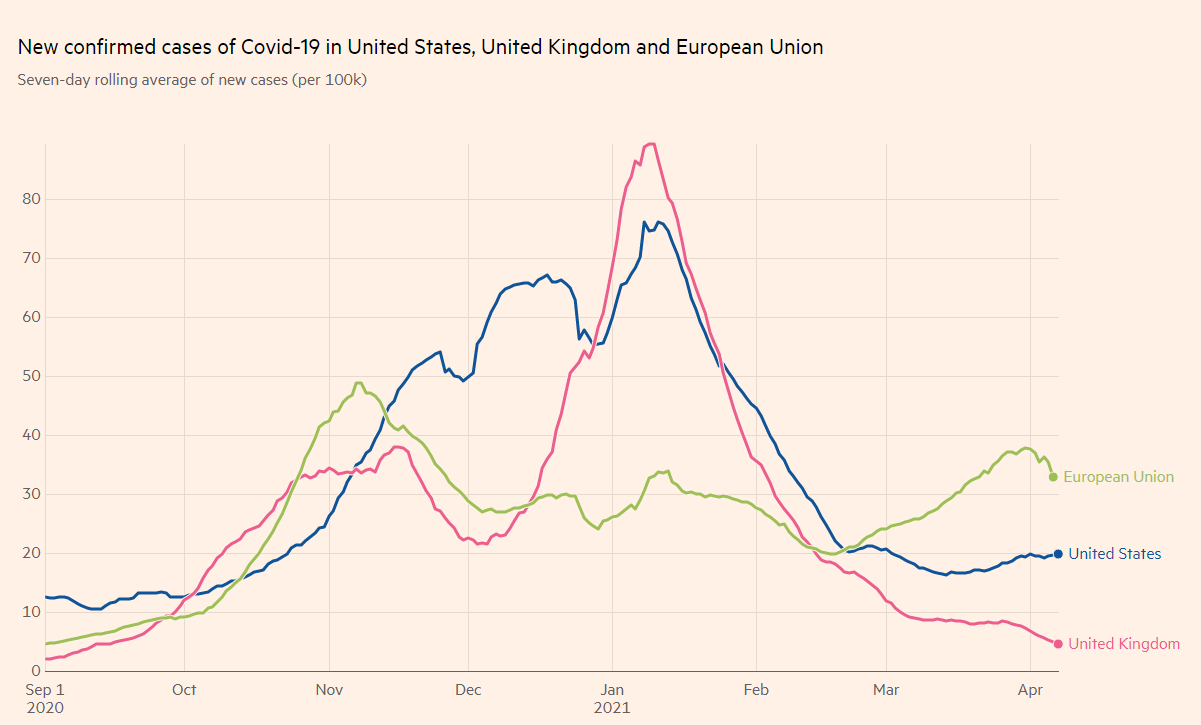 However, sterling was hit by issues with its homegrown AstraZeneca vaccine. Regulators in both the UK and the EU concluded that the jab is linked to rare cases of blood clots, which caused a public scare despite a one-in-a-million chance of dying from the inoculation.

Nevertheless, Britain has already suffered from a “dry month” in vaccine supplies, and the news weighed on sterling. The initial use of Moderna’s immunizations did little to mitigate the AZ setback.

Another issue that surfaced is Brexit. Frustration around arrangements related to Northern Ireland was one of the issues that triggered unrest in Belfast. Scenes of petrol bombs after years of peace came on top of trade hurdles that British exporters suffer.

In the US, most economic indicators remained robust. The  ISM Services Purchasing Managers’ Index came out at 63.7 in March – the highest on record. JOLTs job openings also smashed estimates with around 7.4 million in February. However, weekly jobless claims held up above 700,000 for the second consecutive week, raising worries that the road to employment recovery still remains long.

Getting people back to work – including those sleeping in a “tent city” – remains the primary goal for the Federal Reserve, which wants outcomes, not outlooks. Chair Jerome Powell and the bank’s meeting minutes both sent a dovish message, pledging to support the economy by keeping rates low and printing dollars.

That kept the greenback under some pressure, but it did not last for too long. Investors sought the safety of the dollar and also seemed to remember that Powell’s words were not news.

President Joe Biden continued pushing for his infrastructure plan, focusing more on taxes. Joe Manchin, the most conservative Democratic Senator, ruled out a corporate tax hike to 28% but seemed to allow for a lower 25% rate, above the current 21% one.

After the upper chamber’s parliamentarian ruled that Dems can use the shortcut reconciliation process to approve the bill, its fate is in their hands, not in Republicans’. Fiscal stimulus somewhat faded from the White House’s agenda amid a fresh focus on gun control and immigration.

Reaching new people with vaccines has ground to a halt – the lack of inoculation supplies and the need to give second doses has slowed down the spread of protection, and this trend will likely continue. However, the UK needs only several more first jabs to reach 50% of its population.

Maintaining a decent pace of vaccinations and keeping the virus in check are critical to allow a renewed rally. 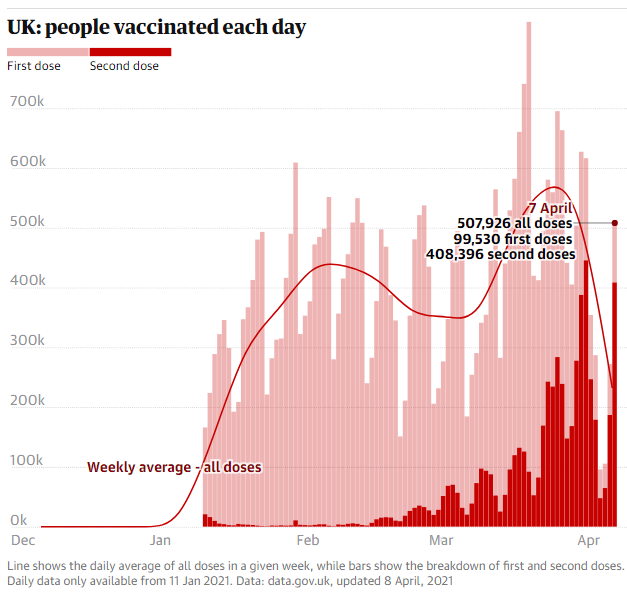 While the UK leads the EU in vaccines, the adverse effects of Brexit are gradually returning to the fore. If unrest continues in Belfast and British exporters continue struggling with hurdles, sterling may come under pressure. The impact is still to be seen.

The highlights of the economic calendar are Gross Domestic Product figures for February. The 2.9% squeeze in January was the result of the nationwide lockdown, which extended into February. However, the economy held up better than expected, and upbeat figures for February may support the pound again. Industrial output and the BRC’s retail sales statistics are also of interest.

US events: Consumer in focus

Is the US vaccination campaign about to suffer from a demand issue after a supply one? Adults in almost all states are eligible to receive the jabs, and the pace has been impressive – over three million doses administered per day.

With the last states set to offer inoculations to all those 18 and older on April 19, the focus may shift to the uptake of vaccines. At the current pace, 70% of Americans will have been vaccinated by mid-June, but any hesitancy may push that date back. The upcoming week will probably see a rapid uptake, but signs of a plateau may begin showing up. 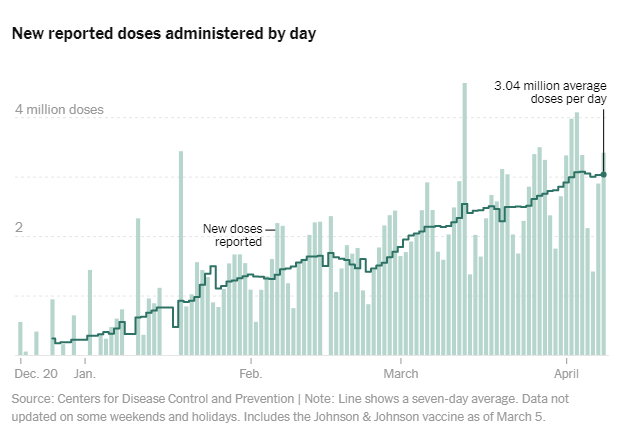 Negotiations between the White House and Democrats in Congress around tax and spending are set to continue, yet politicians also have other issues to grapple with, putting fiscal policy on the back burner for now.

The economic calendar features several top-tier events. Inflation figures for March are set to show a substantial increase in the headline Consumer Price Index – from 1.7% to 2.4%. This move is mostly due to “base effects” – the considerable drop in prices in March 2020. Investors will be watching Core CPI, which is set to advance more moderately, from 1.3% to 1.5%. Any sign of overheating may boost the dollar, while subdued inflation may weigh on it.

Speeches by several Fed officials and the bank’s Beige Book – a collection of economic anecdotes from the Federal Reserve’s regions – may repeat the same message that the recovery is robust but that there is still a long way to go.

The highlight of the week is Retail Sales figures for March. Consumers received additional stimulus checks last month and may have gone on a shopping spree. Economists expect headline sales to have risen by 4.7%, more than countering February’s fall. Various core spending measures will be eyed as well.

These expenditure figures will likely overshadow weekly jobless claims but any drop back below 700,000 would be encouraging, while another week of elevated figures may weigh on the dollar.

Last but not least, the University of Michigan’s preliminary Consumer Sentiment Index figures for April are forecast to extend their rise amid vaccinations, reopenings and stimulus checks. 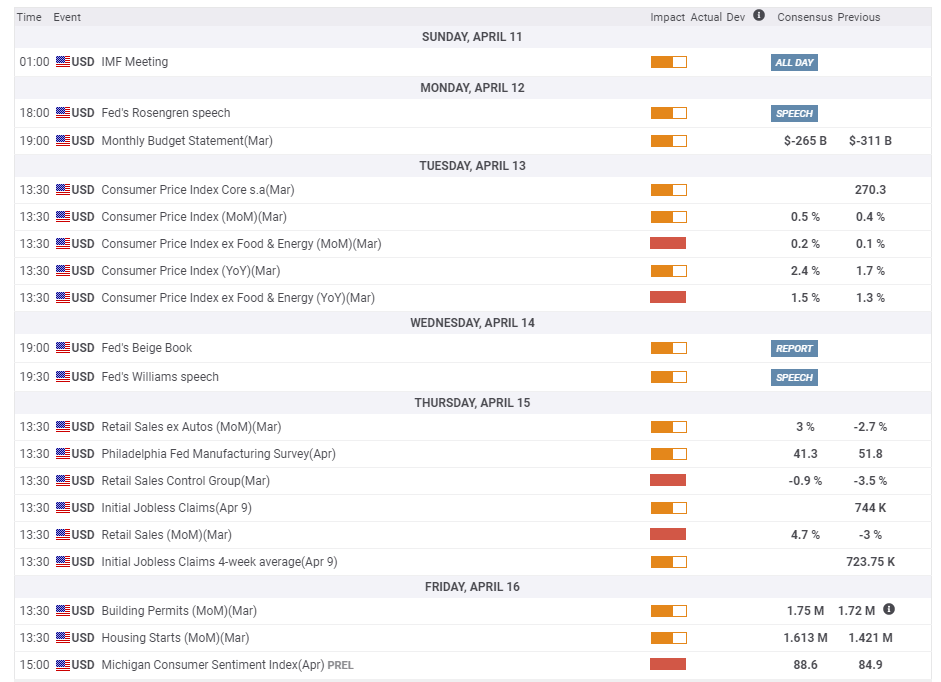 Break or bounce at critical support? At the time of writing, cable has been able to hold above 1.3670, March’s low point, creating a double-bottom as the daily chart shows. However, momentum has swiftly flipped back to the downside after a short spell with the upside. Moreover, pound/dollar slipped back below the 50-day Simple Moving Average (SMA) and is in danger of dropping below the 100-day SMA.

As long as the Relative Strength Index remains away from the oversold territory – holds above 30 – bears remain in the lead.

Even if US inflation remains subdued and Britain’s virus figures extend the downtrend, robust American Retail Sales and growing worries about Brexit could keep the pressure on pound/dollar.

The  FXStreet Forecast Poll  is showing that experts are bearish in the short-term, seeing cable depressed around 1.37. However, the outlook substantially brightens afterward with rising targets in the medium and long terms. In comparison to the previous week, the average targets are little changed. 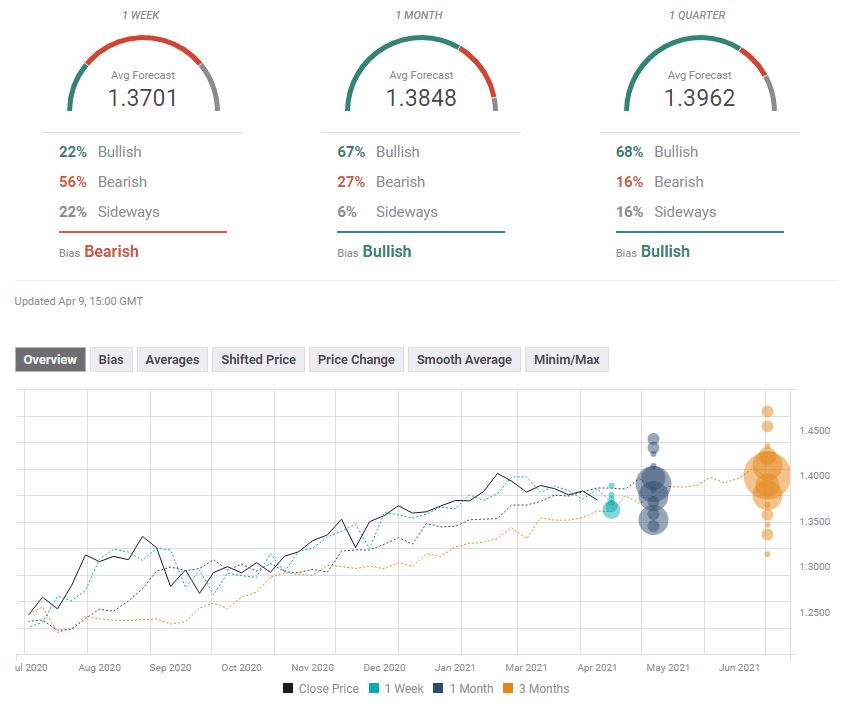 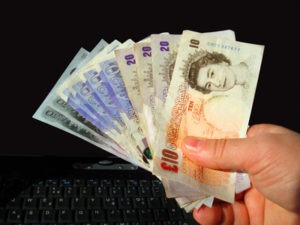 GBP/USD has been under selling pressure amid vaccine concerns and despite dollar weakness.   US consumer figures and vaccine developments are set to rock the pound. Mid-April's daily chart is painting a bearish picture. The FX Poll is pointing to short-term falls but an upswing later on. The dollar has won the "ugly contest" with the pound - profit-taking and vaccine issues have weighed on the pound more than Fed-related vulnerability has hurt the greenback. Immunization remains central to markets, while US Retail Sales, Inflation and Consumer Sentiment are eyed as well. This week in GBP/USD: Sterling suffers more than…