Latest
You are at:Home»Opinions»GBP/USD: Is the rally reversible? Stimulus, NFP, and shots in the arm closely watched

“Incomparably better” – that is how Prime Minister Boris Johnson has described Britain’s position in the summer, after laying out a much-anticipated exit plan. The pound cheered the news while the dollar declined as Treasury yields have been slowing their upward march. US stimulus, a full buildup to Nonfarm Payrolls and Britain’s vaccine statistics are all crucial to the next moves.

This week in GBP/USD: Boris goes slow and steady

Circling the summer solstice: June 21 is the date on which Brits will return to a sense of normality if everything goes to plan. The slow four-stage exit scheme consists of five-week gaps and may seem slow. However, it received wide support from the public, the opposition, the medical community and also from currency traders who picked up the pound.

The background to the PM’s announcement is the steadfast pace of the UK’s vaccination campaign and the ongoing downfall in COVID-19 statistics. Speculation that the program would be accelerated gave another jolt to the pound, but the fast move above 1.42 did not hold. 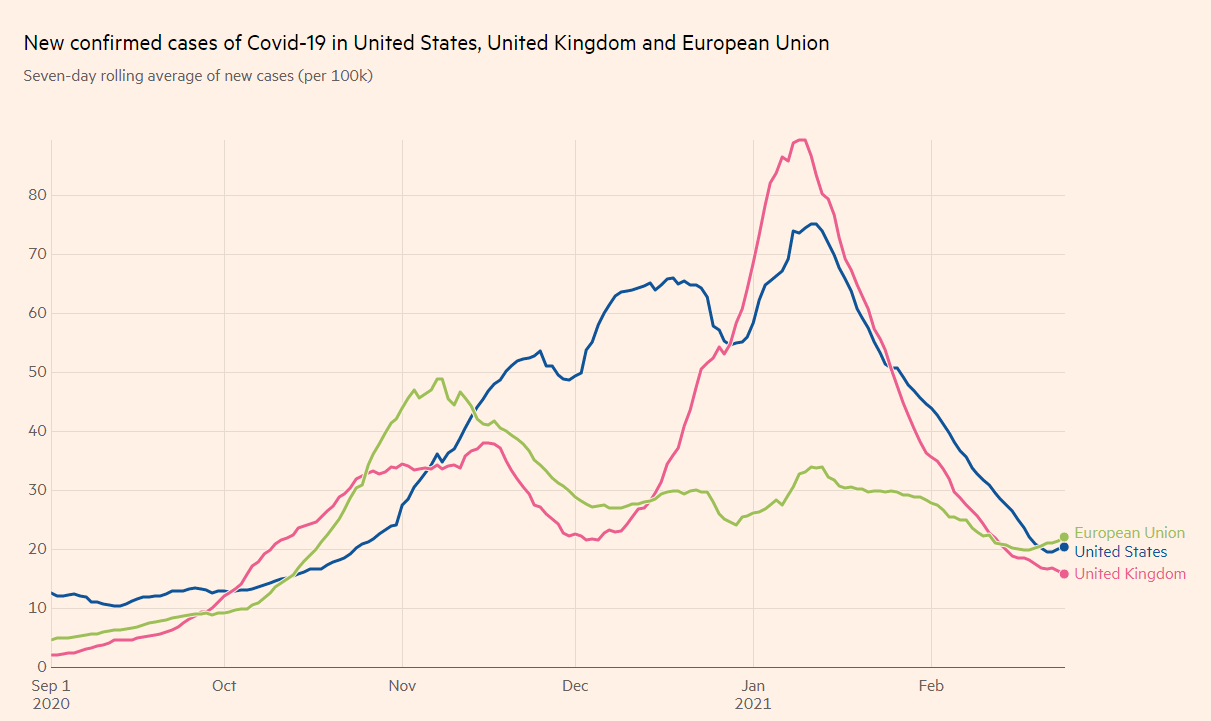 Sterling was also supported by upbeat employment figures. Jobless claims fell by 20,000 in January while wage growth accelerated in late December and the jobless rate rose to 5.1%, as expected.

On the other side of the pond, the US dollar was torn between optimism about the future – weighing on the safe-haven dollar – and rising bond yields. Jerome Powell, Chairman of the Federal Reserve, dismissed concerns about rising inflation by saying he hopes to reach the 2% goal only within three years.

Moreover, the world’s most powerful central banker and his colleagues stressed that ten million Americans are out of work and hinted they would tighten policy only when these people are back in the workforce. Overall, the Fed committed to low rates and more bond-buying for longer.

The pledge to keep supporting the economy only partially soothed markets as fears of inflation pushed returns on US debt higher, thus making stocks less attractive. The tug-of-war between the narratives continues.

Bond yields finally made a big break higher on Thursday, shooting to as high as 1.61%. The rapid move sent stocks sinking and the dollar surging on a mix of higher returns and safe-haven flows. GBP/USD badly suffered from a fall below 1.40.

Selling off US debt is partially based on fiscal stimulus, yet President Joe Biden’s plan hit a snag after the Senate parliamentarian disqualified the minimum wage hike from the bill. While Democrats are set to pass the legislation in the House, the upper chamber may reject it.

The US FDA gave its nod to Johnson and Johnson’s single-shot COVID-19 vaccination. Additional encouraging news came from Israel, where peer-reviewed research showed that the Pfizer/BioNTech jabs lowered infections by 94%.

US data was somewhat mixed. While jobless claims dropped to 730,000, they were likely skewed by the storm that hit the southern US. Headline Durable Goods Orders for January jumped, but non-defense, ex-air orders missed estimates with a meager rise of 0.5%. Fourth-quarter growth was marginally revised higher to 4.1%.

All in all, sterling continued shining while the dollar experienced choppy trading and eventually a surge.

How certain is Britain’s exit from its restrictions? The answer heavily depends on the nation’s vaccination campaign. At the time of writing, the UK reached 28% of its population with at least one dose, an impressive feat. Holding the current pace would be positive for the pound, while a slowdown would weigh on it. 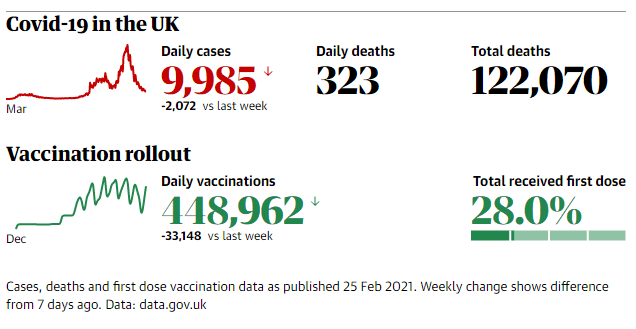 The economic calendar is relatively light ahead of the following week’s Bank of England decision. Markit’s final PMIs for February will likely confirm weakness in the services sector and strength outside of it. Mortgage approvals and house prices are of interest as the housing has become more active in recent months.

US events: Signal from the Senate, Nonfarm Payrolls

At the time of writing, the House of Representatives is gearing up to pass President Joe Biden’s ambitious $1.9 trillion covid relief package. While Democrats only have a small majority in the lower chamber, there are little doubts it will pass. However, the Senate is a different story.

Dems and Republicans are evenly split in the upper chamber, with Vice-President Kamala Harris wielding the tiebreaking vote. Every vote counts and all eyes are on the most conservative members of the left-leaning party, most notably Joe Manchin III of West Virginia. If he has concerns, the bill would be delayed and markets could shiver.

Political analysts have marked March 14 – the day that several federal aid programs expire – as a deadline. However, statements related to passing the legislation or watering down may come into the spotlight already now.  The battle over the minimum wage remains one of the key sticking points between moderates and liberals.

America’s vaccination campaign was hit by the storm, with the pace falling from around 1.7 million doses per day to below 1.5 million. Will it pick up now? The inoculations have already brought down deaths in nursing homes. An immunization ramp-up would help lift sentiment. 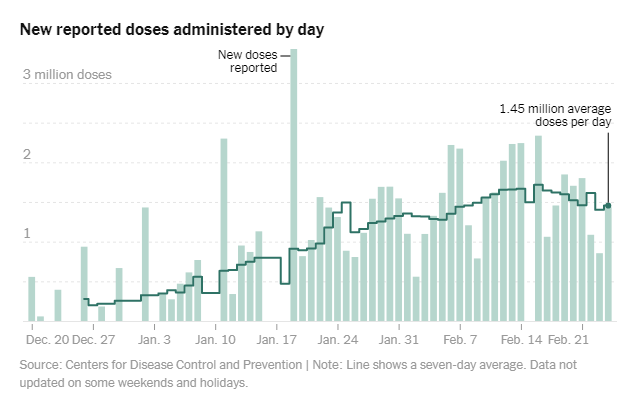 The new month brings a busy economic calendar. ISM’s Manufacturing Purchasing Managers’ Index for February is set to show ongoing robust growth and serve as a hint toward Friday’s Nonfarm Payrolls. The Services PMI is due out on Wednesday and its employment component is closely watched as a gauge of labor conditions in America’s largest sector.

ADP’s jobs report may garner more interest than beforehand as its figures are now better-correlated with the official employment data. During most of 2020, the payroll firm’s figures were a poor gauge of those coming from the Bureau of Labor Statistics.

Thursday’s jobless claims are for the period after the NFP surveys were conducted, but are still of interest. A high number of applications shows the economy still has a long way to go.

Just before the NFP, Fed Chair Powell will have a chance to move markets again. If yields remain high and stocks turbulent, he could use his public appearance to reassure investors that the bank is there to buy bonds – perhaps even offering to speed up purchases of US debt.

Finally, Friday’s Nonfarm Payrolls are set to rock markets. While investment and shopping have risen, around ten million remain out of work. The calendar is showing that another month of job gains is on the cards, but to catch up, the NFP would need to surpass the pre-pandemic levels between 100,000 and 200,000 positions gained.

Changes in the Unemployment Rate will likely make political headlines but they matter less than beforehand for the Fed. The calendar is pointing to a deceleration in wage growth, but that would show that more lower-paid Americans – hardest-hit in the pandemic – are getting back to work.

As mentioned earlier, the conflicting narratives – while growth is positive, overheating is adverse to markets. These narratives will likely be on full display for another week.

More Can the US economy lead the dollar higher? 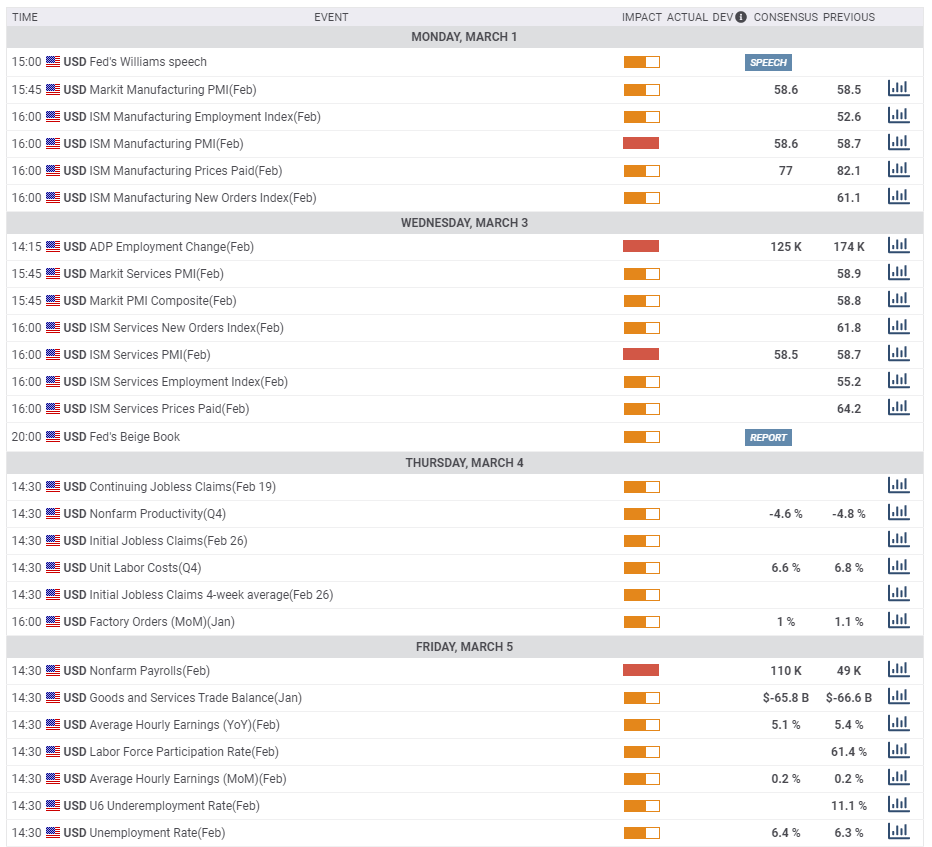 Pound/dollar went too high, too fast – and that was manifested on the Relative Strength Index on the daily chart, which topped 70 and thus entered overbought conditions. The ensuing sell-off of 300 pips already sent the RSI back to the balanced territory. Other indicators are bullish – momentum is to the upside and the currency pair is trading above the 50-day, 100-day and 200-day Simple Moving Averages.

All in all, the bulls seem ready to resume the rally.

Rising US yields are now better reflected in GBP/USD and after the correction, the long-term uptrend in cable may resume continuing amid the Fed’s relentless dollar printing and Britain’s prospects of exiting the crisis.

The FXStreet Forecast Poll is pointing to a short-term bounce toward 1.40 but a failure to claw back that level and fall afterward. It is essential to note that despite the recent volatility, experts maintain a steady hand and have changed maintained average targets little changed in the past week. 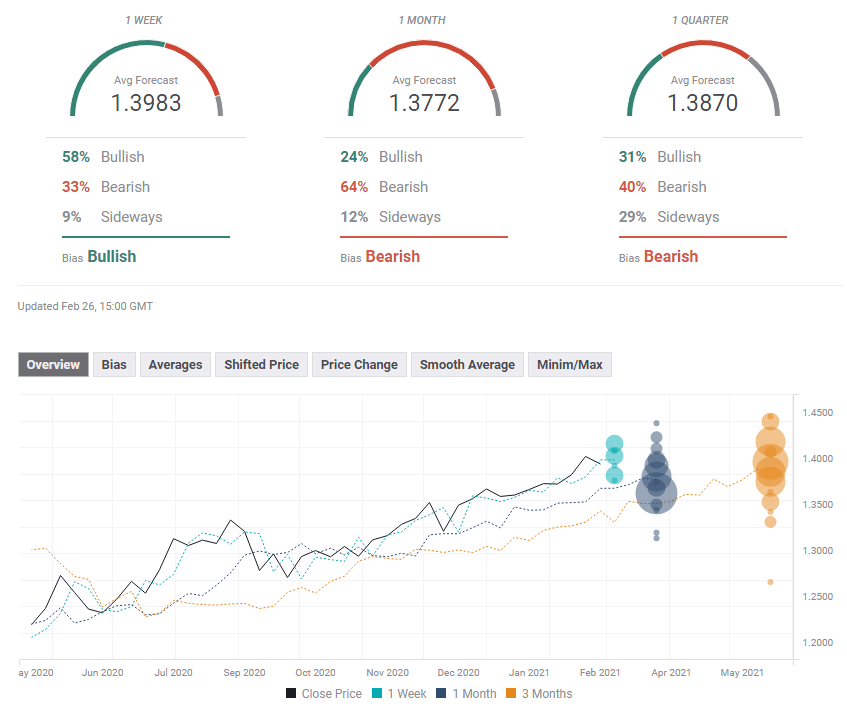 Get the 5 most predictable currency pairs
Previous ArticleUS: UoM Consumer Sentiment Index falls to 76.8 (final) in February vs. 76.5 expected
Next Article ECB to look through the temporary volatility in inflation – Rabobank