Latest
You are at:Home»Forex News»GBP/USD looking strong and ignoring warnings

Brexit has been fading from the headlines – and that has been a significant relief for the pound. GBP/USD has been on the rise after Jerome Powell, Chair of the Federal Reserve, opened the door to cutting rates in the US – and sending the dollar down. GBP/USD has topped 1.2500 and continued higher.

The Fed’s meeting minutes from the June decision have also shown a readiness to cut interest rates. Powell will appear before the Senate Banking Committee later today and will repeat the same messages.

Another potential market mover for the US dollar is June’s inflation report. Core Consumer Price Index is projected to remain at 2%, but the warnings from the Fed Chair imply lower levels.

See US inflation preview: FXStreet Surprise Index and Trend Indicators both point down – USD to fall?

On the other side of the pond, the Bank of England has been unable to stop the rally. BOE Governor Mark Carney has warned that the UK risks material economic disruption from a no-deal Brexit. He has also warned about global headwinds to growth – echoing Powell’s words.

Carney has spoken after the release of the Financial Stability Report which showed that the financial system is ready for Brexit – but that other parts of the economy have room for improvements in preparation for the UK’s exit from the EU.

The Conservative leadership contest continues in the background with former foreign secretary Boris Johnson remaining firmly in the lead. Jeremy Hunt – the other candidate and Johnson’s successor at the foreign office – has been unable to undermine his opponent’s lead in a televised debate earlier this week. 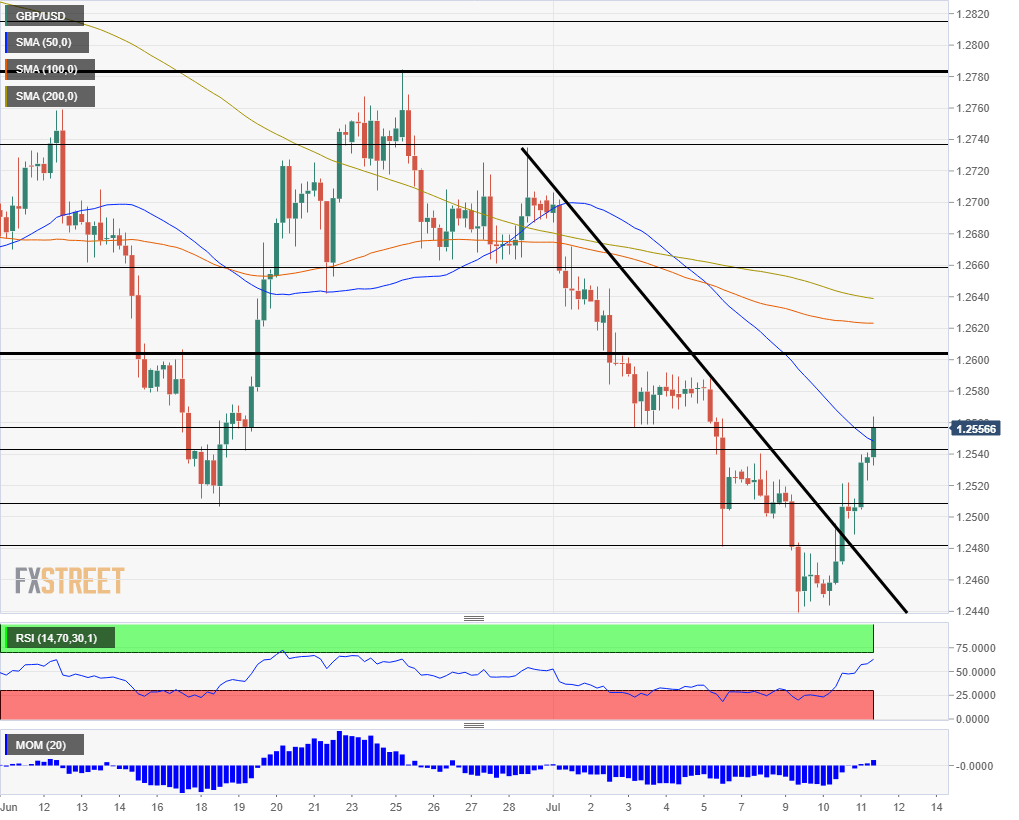 GBP/USD has broken above the steep downtrend resistance line that capped it since early July and also surpassed the 50 Simple Moving Average on its way up. Moreover, momentum has turned positive and the Relative Strength Index is on the rise.

The next resistance line to watch is 1.2605 which held GBP/USD down in mid-June and was a support line in May. Next we find 1.2660 which worked as support for long days in late June. The next line is 1.2740 – where the downtrend resistance began. It is followed by 1.2780 which was the high point last month.