Latest
You are at:Home»Opinions»GBP/USD: Next stop 1.40? UK reopening expectations and US stimulus eyed

Fast US vaccinations, a quick retreat in the dollar – what else could cable bulls have asked for? The perfect storm has sent GBP/USD to fresh 34-month highs, and further gains depend on these themes and on updated economic indicators and signs that the UK is beginning to open up.

This week in GBP/USD: Everything going in favor of cable

One in every five Brits has received at least one covid vaccine dose – double the rate than in the US and far above Europe. The immunization campaign continues at full force, but Prime Minister Boris Johnson has urged further patience. Still, forex traders tend to move first and ask questions later, sending sterling higher.

Does the national inoculation effort already positively impact pushing infections lower, or is it the lockdown? For markets, it does not matter, as long as Britain’s trend remains sharply to the downside. 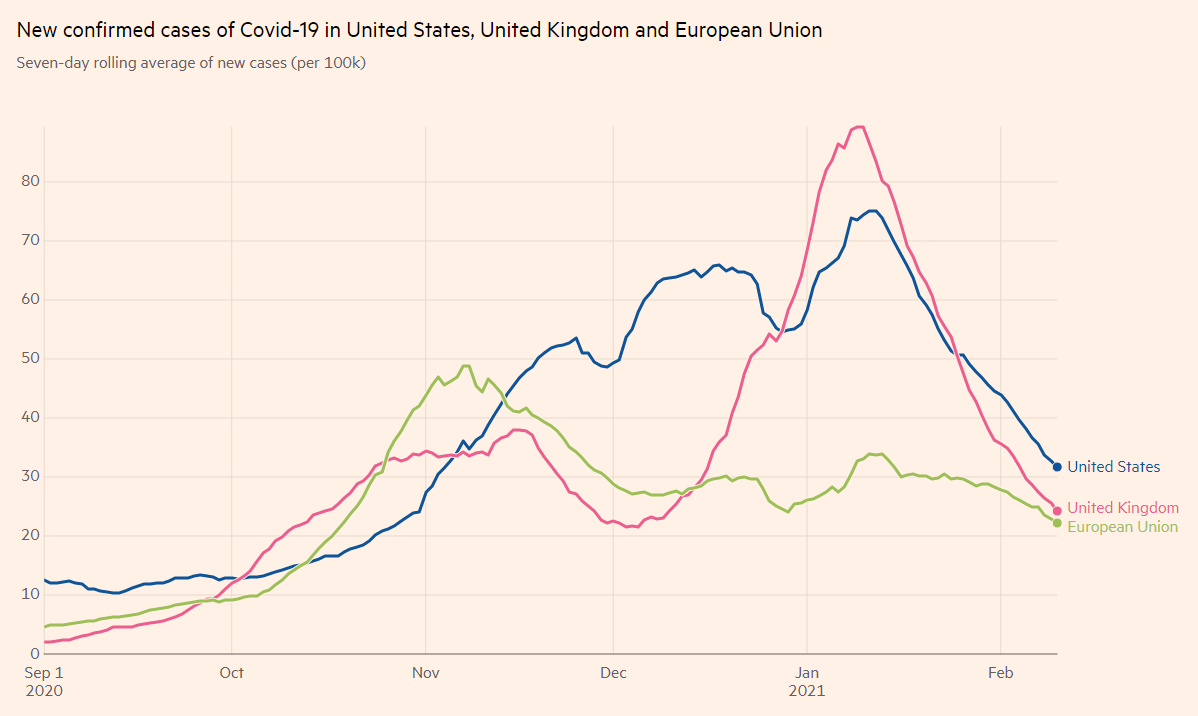 The US has also ramped up its efforts to vaccinate the public – but efforts to boost the economy have somewhat stalled. The Senate has been consumed by former President Donald Trump’s trial, and talks with moderates in both parties and within the Democratic Party have moved out of the spotlight.

Amid prospects of somewhat slower growth, investors gradually returned to buying US bonds, pushing yields and the dollar lower. The correlation between the greenback and returns on US debt remains significant.

Jerome Powell, Chairman of the Federal Reserve, also contributed to the dollar’s downtrend. The world’s most powerful central banker reiterated his pledge to support the economy and dismissed any potential rise in inflation as one that “would not mean that much.” Indeed, Consumer Price Index figures for January missed estimates with 1.4% yearly.

Powell also vowed to do everything to reach full employment, and a bump up in weekly jobless claims proved that the path remains long on that front as well. That means the Fed will likely continue buying bonds and pushing the dollar lower.

All in all, it was a win-win week for GBP/USD.

When will Britain exit lockdown, and how? While the PM promised to lay down a plan only on February 22, details are set to leak out in the upcoming week. The faster the government moves, the better for the economy and the pound. Removing restrictions is conditional on advancing rapidly in vaccination, making daily figures more important.

It is essential to note that Britain tends to hit records on Saturdays, so an upbeat report could boost the pound early on over the weekend. Clearing up of hospitals is also essential.

While Britain is the leader in the Western world, eyes are on Israel, the country to inoculate the highest percentage of its citizens. More evidence has come out of the vaccines’ success, but after the local government began removing restrictions, a spike could occur. If Israeli covid figures continue falling, it would be encouraging for Britain and the pound.

The economic calendar kicks off in earnest only Wednesday, with the publication of UK CPI figures for February. Like the US, inflation is set to remain subdued once again, allowing the Bank of England some breathing space.

Retail sales figures are of interest. During the crisis, consumers were holding up thanks to the government’s furlough scheme and other aid programs, with sales rising 2.9% in 2020 despite the economy’s contraction. Last but not least, Markit’s preliminary Purchasing Managers’ Indexes are set to show an ongoing divergence between the humming manufacturing sector and the depressed services one. 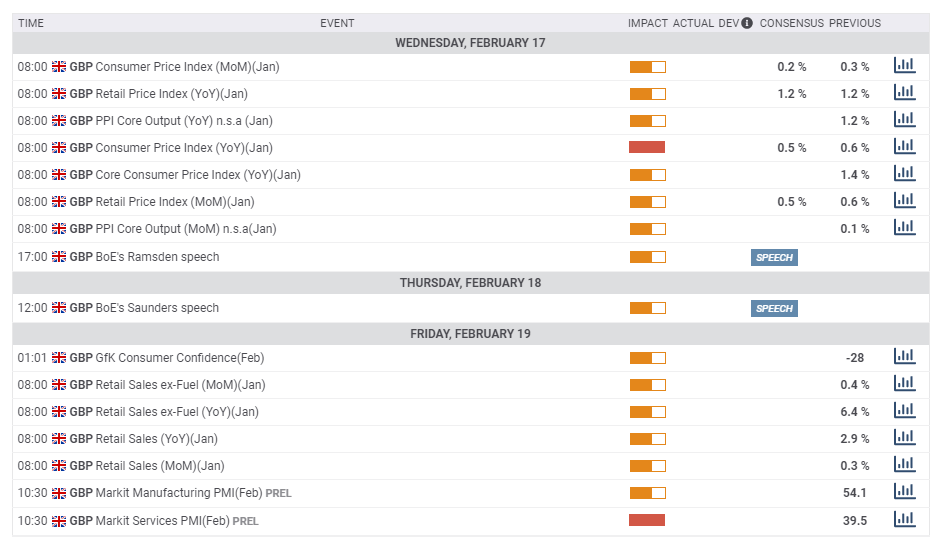 US events: Dual stimulus and the consumer are eyed

Fiscal stimulus returns to the fore: Trump’s trial continues in Washington but is set to conclude within days. Even before there is a verdict – the former President will likely be acquitted as not enough Republicans will vote to convict him – headlines related to a stimulus are set to impact price action. For markets, the logic is simple: the more money, the better.

Will Democrats push for the full $1.9 trillion package that Biden proposed? Probably not, but a sum closer to that and further away from $1 trillion would certainly be satisfactory for stocks. For the dollar, a more generous headline number means higher growth prospects and expanded debt issuance, thus an upward move in the greenback. It would be fair to say that a bill worth around $1.5 trillion is mostly priced in.

America has ramped up its vaccination campaign, and the estimated time to reach 50% of the population has been brought forward from mid-July to late June. Markets will follow the drive, albeit less than for the UK, where the lockdown entirely depends on immunization. 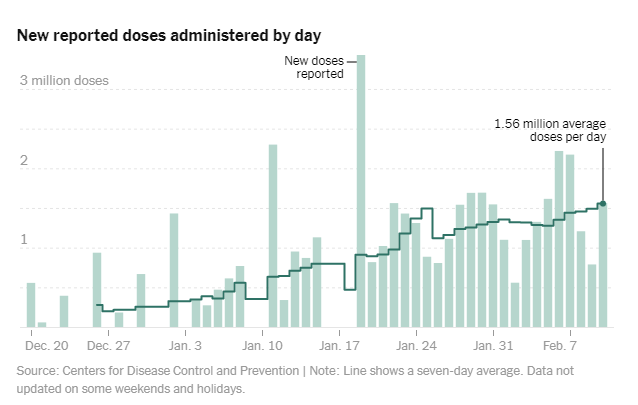 The world’s largest economy is centered on consumption, and Retail Sales statistics for January are set to have a substantial impact. Expenditure fell sharply in both November and December, despite holiday shopping. Sales have likely increased in January, partially thanks to Congress’ most recent stimulus bill in late December. Any deviation from economists’ estimates is set to move the greenback.

The Federal Reserve’s meeting minutes are also of high interest. In late January, the protocols from the bank’s decision will likely echo the Fed’s pledge to keep the pedal to the metal – ongoing support to the economy until it convincingly gets out of the woods. Any hints of tapering the pace of bond-buying would boost the greenback, while some members’ pressure to do more could weigh on it.

Weekly jobless claims for the week ending February 12 will be watched closely for the week when Nonfarm Payrolls surveys are held. 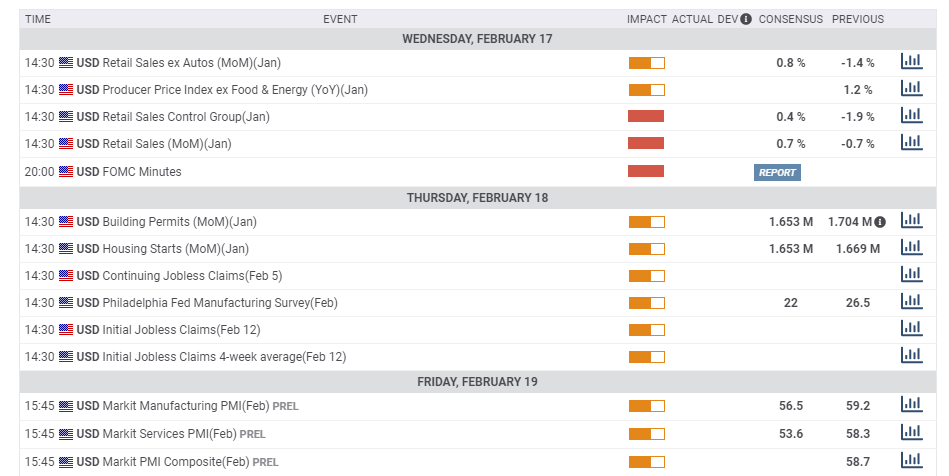 Pound/dollar has been extending its uptrend in a steady way, with the Relative Strength Index on the daily chart remaining below 70 – outside overbought conditions. Momentum remains to the upside, and the currency pair is holding above the 50-day, 100-day and 200-day Simple Moving Averages.

All in all, bulls have the upper hand.

Some support awaits at the swing low of 1.3775 seen in mid-February. It is followed by 1.37, a round number that also held cable down in January. The next noteworthy cushion is 1.3565, which is February’s low point. 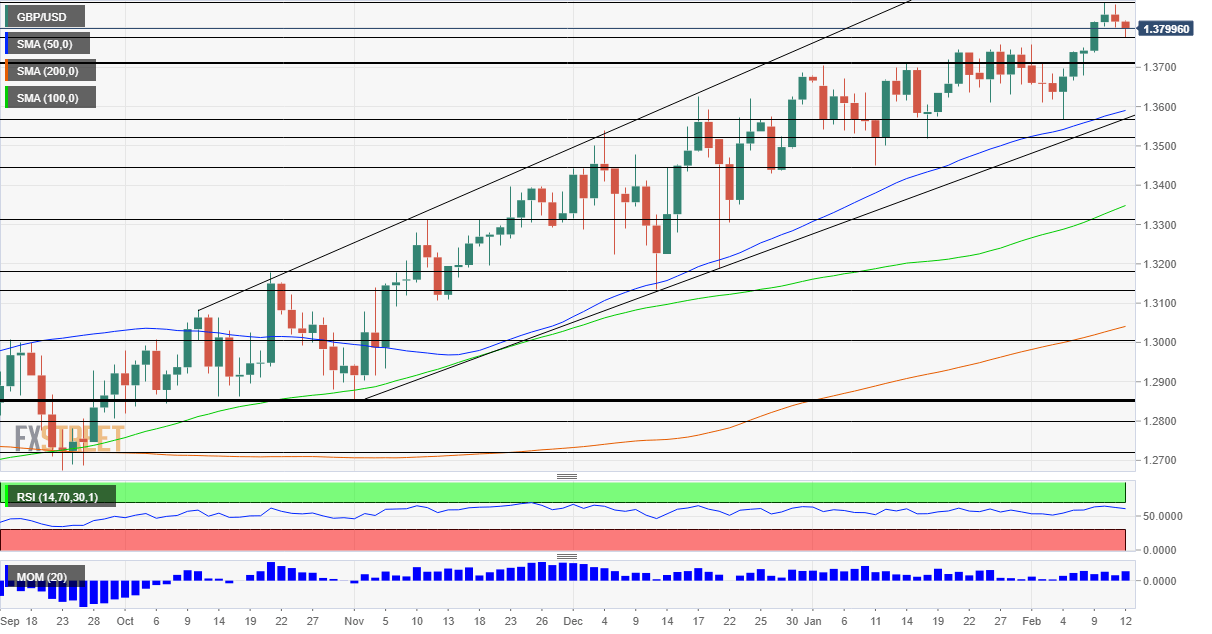 Cable has taken two steps forward, one step back. The current trend will likely continue amid ongoing improvement in the UK and probably another week of waiting for US stimulus.

The FXStreet Forecast Poll is showing that experts have somewhat upgraded their average targets from the previous week, but remain skeptical about the sustainability of these gains. The average targets are all below current prices, pointing to a pullback. 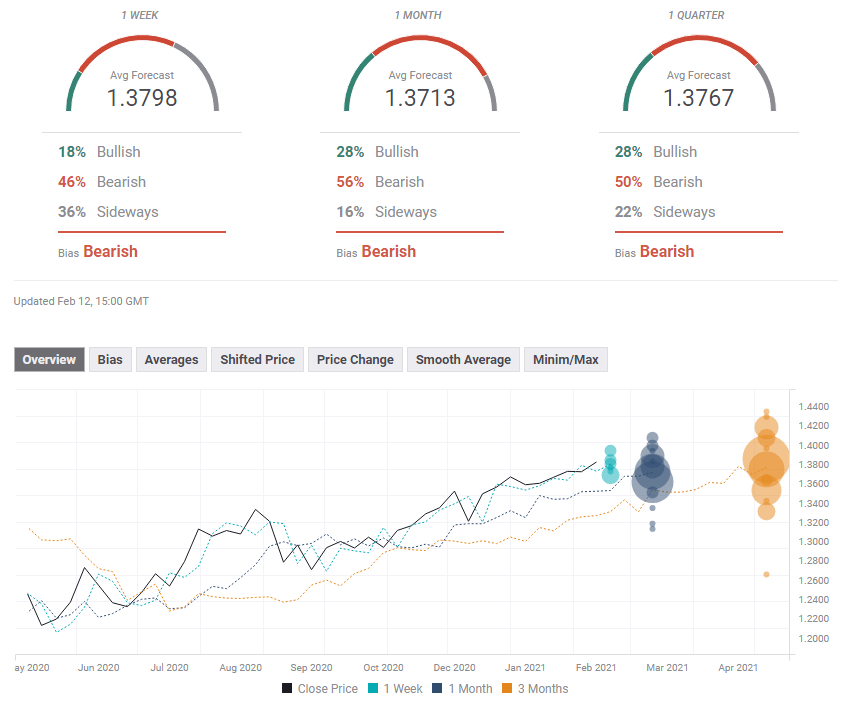