Latest
You are at:Home»FXStreet News»GBP/USD Price Analysis: Spikes to fresh session tops, retakes 1.3900 mark and beyond

The GBP/USD pair rallied around 70 pips from the early European session lows near the 1.3840 region and refreshed daily tops in the last hour. Bulls are now be looking to build on the momentum further beyond the 1.3900 round-figure mark.

From a technical perspective, this week’s pullback from 34-month tops, around mid-1.3900s dragged the GBP/USD pair below a near two-week-old ascending trend-line support on Wednesday. The corrective slide, however, stalled on Thursday and the pair managed to attract some dip-buying near 200-hour SMA.

The mentioned support is currently pegged near the 1.3835-30 region, which should now act as a key pivotal point for traders and help determine the GBP/USD pair’s near-term trajectory.

Meanwhile, the intraday bounce pushed the GBP/USD pair back towards the mentioned trend-line support breakpoint, now turned resistance. A sustained move beyond will negate any near-term bearish bias and push the pair back towards the 1.3950 area, or the highest level since April 2018 touched on Tuesday.

On the flip side, the 100-hour SMA, around the 1.3880 region, now seems to protect the immediate downside. This is followed by support near the 1.3835 area (200-hour SMA), which if broken might prompt some technical selling and pave the way for a further near-term depreciating move.

The GBP/USD pair might then turn vulnerable to break below the 1.3800 mark. Any subsequent slide might still be seen as a buying opportunity and remain limited near the 1.3760-55 region. 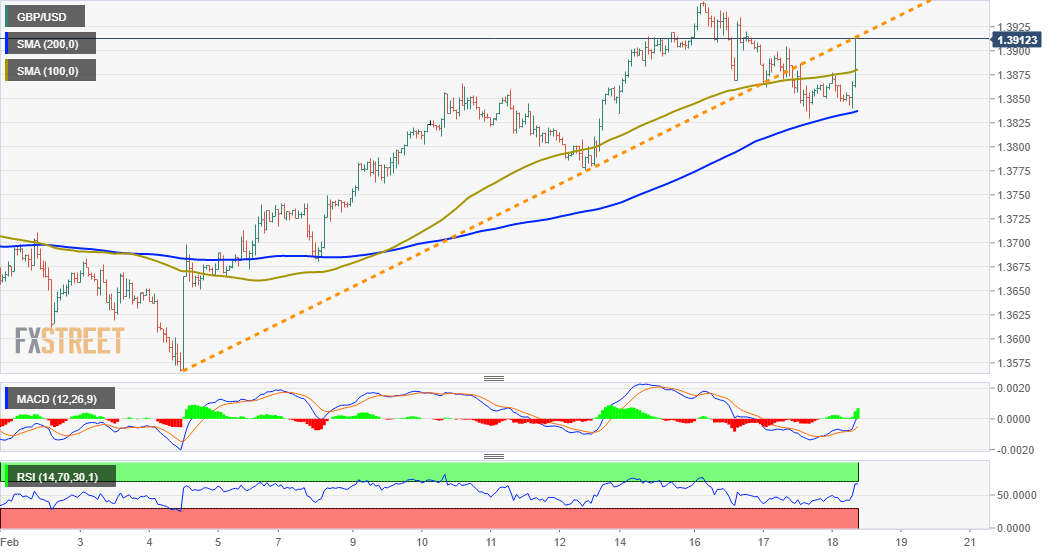