In the latest updates of the saga, the EU is demanding the UK ditches plans to rewrite parts of the Brexit divorce deal “by the end of the month” or risk jeopardising trade talks.

Šefčovič was reported to have said since the meeting, that the planned UK bill had “seriously damaged trust” and the EU would not be “shy” of using legal action against the UK.

This is all down to the Prime Minister Boris Johnson’s proposed Internal Market Bill, which was published on Wednesday pertaining to the Northern Ireland Protocol.

The hang-up is the border on the island of Ireland

The border has unique political significance due to the history of Ireland and conflict in Northern Ireland.

This is the only land border between the UK and the rest of the EU and at the moment there are no barriers and checks along it.

However, following Brexit, the border between Northern Ireland and the Republic of Ireland will become an external EU border, but,  in theory, a “hard” border could return, an element of the withdrawal agreement designed to prevent.

The main concerns have been expressed that any infrastructure and police presence at the border could present a target for terrorist attacks.

As it stands, the 1998 Good Friday Agreement is in jeopardy because if the withdrawal agreement isn’t signed and the UK leaves without a deal then customs and regulatory checks could be introduced on goods moving between Northern Ireland and Ireland.

The bill for which the UK’s PM has proposed is that are to be no new checks on goods moving from Northern Ireland to Great Britain.

The bill gives UK ministers powers to modify or “disapply” rules relating to the movement of goods that will come into force from 1 January, if the UK and EU are unable to strike a trade deal.

Mr Johnson has defended the bill, saying it would “ensure the integrity of the UK internal market” and hand power to Scotland and Wales, while protecting the Northern Ireland peace process.

Meanwhile, the EU has rejected the UK’s arguments that the bill is designed to protect peace in Northern Ireland arguing that “it does the opposite”.

Mr Šefčovič said that if the bill were to be adopted, it would constitute an “extremely serious violation” of the withdrawal agreement and of international law.

The Internal Market Bill will be formally debated by MPs in Parliament for the first time on Monday, 14 September.

What does this all mean for forex?

Another layer of uncertainty for the pound.

PM Johnson is having trouble selling this view even to his own party.

We have already seen the resignation earlier in the week of the permanent secretary to the government’s legal department Jonathan Jones.

There has been a backlash from a number of senior Tory MPs including former PM May.

Brussels is threatening legal action and Speaker of the House Pelosi is warning of ‘absolutely no chance’ of a trade deal with the US if the UK government were to undermine the terms of the Good Friday Agreement.

Bojo is feeling the heat as the pressure is on for the UK government to backtrack or for MPs to rebel.

Analysts at Rabobank explained that this backdrop underpins our view of GBP as a vulnerable currency.

EUR/GBP having sailed through out 0.92 target today, it is possible that the decisions taken by the Johnson government could risk a move towards last year’s highs in the 0.9325 area in the coming weeks.

On the charts, cable is well on its way to the weekly support in the 1.2650 regions, however, there are prospects of a retracement in the meantime.

While not a fundamentally sound bet on the pound, technically, there is the case for a 38.2% Fibonacci retracement of the 4th Sep highs to 1.2980 where it meets the prior daily bullish close in the recent waterfall bearish trend.

This could be an area of resistance from which bears might wish to board the train all the way to weekly support in the 1.2650 if that train has not already left the station. 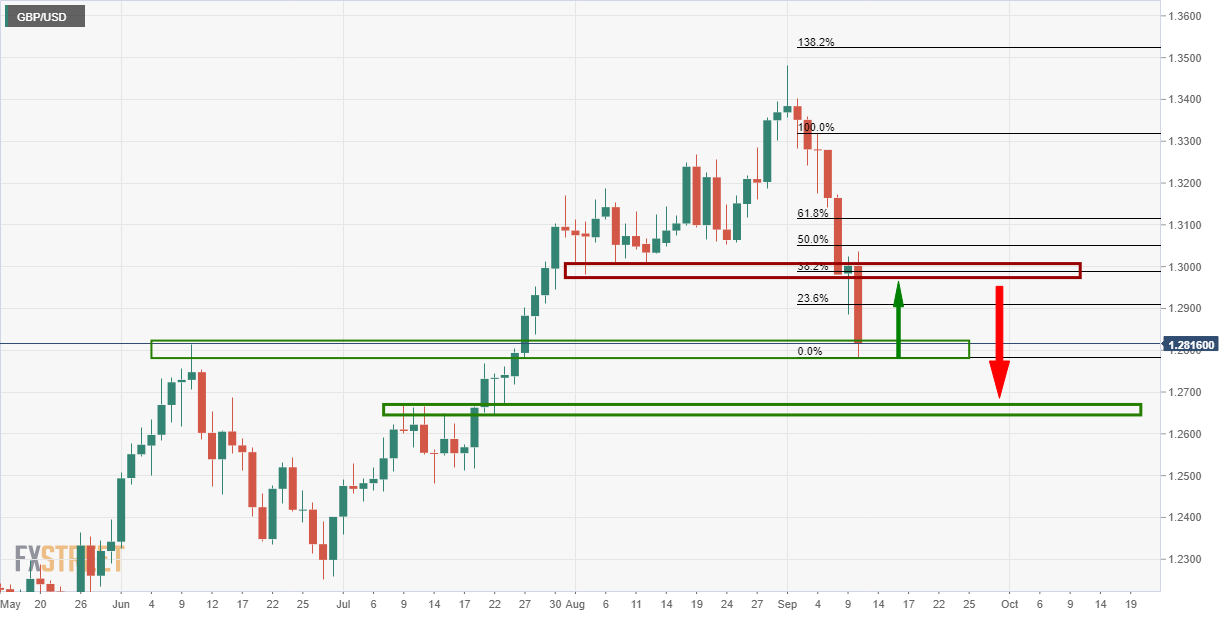 BoC’s Macklem: Will take CAD’s level into account when assessing how much stimulus needed

GBP/USD is under heavy selling pressure, facing weekly lows in the 1.2650 area on a break of current support. The Brexit saga continues and the plot thickens as PM Johnson pulls out his best trick yet out of the hat. GBP/USD is currently trading at 1.2846 and within the 1.2781 and 1.3035 range, down some 1.22% on the day as layer upon layer of Brexit uncertainties unravel the pound.  In the latest updates of the saga, the EU is demanding the UK ditches plans to rewrite parts of the Brexit divorce deal "by the end of the month" or risk…