Home » GBP/USD: Sterling may get shots in the arm, Powell could pummel the dollar

GBP/USD: Sterling may get shots in the arm, Powell could pummel the dollar

Replacing tiers for fears  – GBP/USD dropped as the UK entered a harsh lockdown to prevent hospitals from collapsing due to the new virus strain. US Democrats’ win of the Senate sparked a mixed dollar reaction. Both stories are set for follow-ups and US retail sales are also of high interest after the Nonfarm Payrolls.

This week in GBP/USD: Lockdown 3.0 hits the pound hard

Back to the spring lockdown: Prime Minister Boris Johnson made a second somber national address in as many weeks, this time announcing a harsh shuttering. The government responded to the surge in cases, deaths, and hospitalizations, with the latter surpassing levels seen in the first wave.

Experts have become more convinced that the new and more contagious British strain of COVID-19 is behind the rapid spread. More worryingly, some fear that a separate South-African variant is resistant to vaccines – while Pfizer has said its formula beats the virus.  The pound struggled amid these depressing developments. 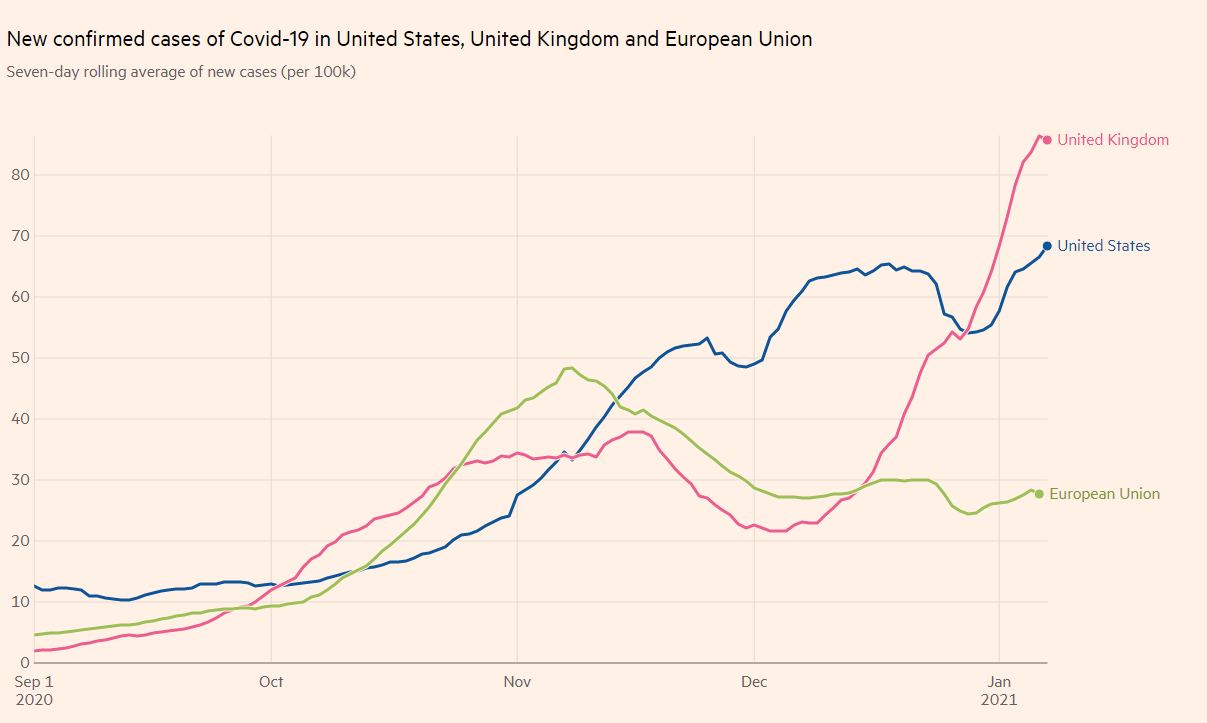 Johnson announced February 15 as a potential exit date from the lockdown, yet that depends not only on virus statistics but also on the vaccine’s distribution. The UK began administering the homegrown University of Oxford/AstraZeneca jabs   – yet the pace remains frustratingly slow. Britain was the first Western country to deploy the Pfizer/BioNTech immunization and use Moderna’s vaccine.

America’s coronavirus  situation is similar  – a holiday-related increase in covid statistics and anger at insufficient vaccine inoculations. The US is injecting Moderna’s jabs in addition to those by Pfizer.

Supporters of President Donald Trump stormed the Capitol and disrupted the debate to certify Biden’s win and resulted in five deaths. The historic insurrection is a political earthquake but only had a minimal effect on markets.

ISM’s Purchasing Managers’ Indexes beat estimates, showing enthusiasm about the future. On the other hand, the impact of the winter covid wave is taking its economic toll. Nonfarm Payrolls fell by 140,000, the first loss since the spring. It was partially offset by upward revisions and a monthly increase of 0.8% in earnings. These silver linings failed to stop the consequent dollar decline.

Exiting the lockdown  – which the PM described as a gradual process  – is now more dependent on vaccines’ pace rather than covid statistics. The pound has room to rise if the immunization graph surges. With expanded capacity at hospitals, investors will likely be less worried about the disease’s statistics, at least in the short term.

At the time of writing, the UK has administered at least one dose to nearly 2% of the population. 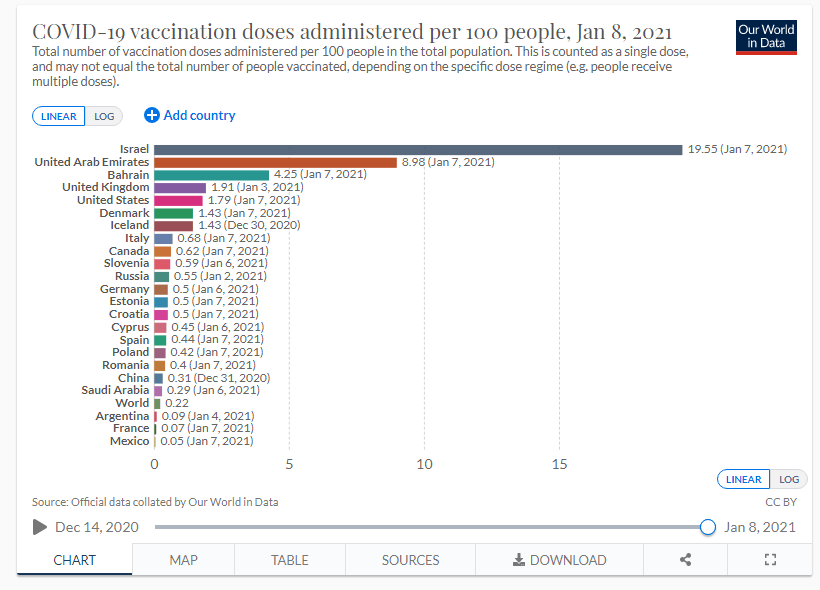 Chancellor of the Exchequer Rishi Sunak may introduce additional support to individuals and businesses amid the hardship caused by the lockdown after an initial package received a cold response by markets. Any substantial help could support sterling.

Brexit has dropped off the headlines amid the focus on the virus, but the impact of Britain’s departure will probably be felt in the coming weeks. At this point, it is hard to separate the damage from the thin trade deal the EU and the UK signed and covid’s impact.

Monthly Gross Domestic Product figures for November stands out on the economic calendar. After a considerable bounce in the summer, growth slowed to 0.4% in October and may have turned negative in November  – when the nation entered its second lockdown. Industrial output figures are also of interest.

Andrew Bailey, Governor of the Bank of England, is scheduled to speak early in the week. Any hint of additional bond-buying – potentially to support further government spending – would boost the pound. This counterintuitive reaction of sterling rising despite printing more of it has been seen throughout 2020.

Markets will likely be digesting the recent political developments and the Nonfarm Payrolls report early in the week before updated coronavirus statistics take over. Further increases in hospitalizations are the most worrisome for markets as they tend to lead to further lockdowns. Governors are reluctant to introduce new restrictions, but the dire situation may push them to do so.

Similar to the UK, the pressure is mounting to increase the speed of the vaccination campaigns. That is unlikely to happen at a rapid pace under the current administration, but states may speed up distribution  – especially as Moderna’s doses require only normal refrigeration temperatures.

Overall, markets want to see hospitalizations fall and vaccines rise. That would boost sentiment and weigh on the safe-haven dollar.

Consumer Price Index statistics  will likely remain subdued. Americans’ higher savings’ will likely push prices higher in the latter half of 2021, but in December 2020 and probably this year, inflation is still depressed. That allows the Fed to keep interest rates at zero, pushing the dollar down.

The highlight of the economic calendar is Thursday’s Retail Sales report. Consumption disappointed in November and likely picked up in December. However, the lack of government support last month probably contributed to another downbeat month.

Jerome Powell, Chairman of the Federal Reserve, will speak on Thursday and may comment on the recent job figures. If he further opens the door to more bond-buying, the dollar could fall. 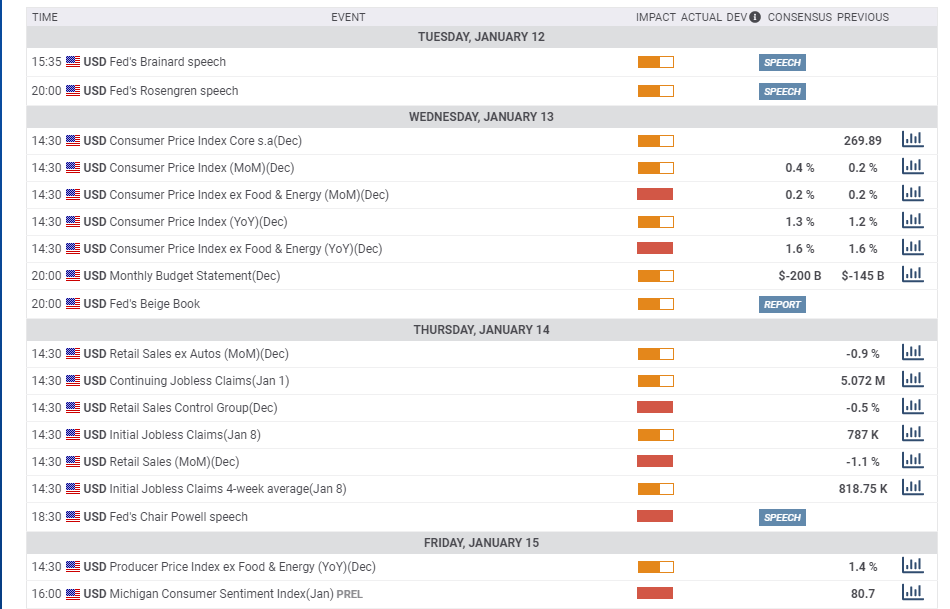 Pound/dollar is benefiting from upside momentum on the daily chart and is trading in a broad upward channel. Cable also continues trading above the 50, 100 and 200-day Simple Moving Averages,  adding to the bullish case.

Can the UK ramp up its vaccination campaign? There is a good chance that it can give a shot in the arm to more people and boost the pound. GBP/USD may also advance if US data remains weak and Powell signals more help. Alongside bullish technicals, there is room for further gains.

The  FXStreet Forecast Poll  is showing that experts are bearish on all timeframes – but all targets are above 1.35, a relatively minor full. It seems that the removal of Brexit risk has put a bottom on dovish expectations. Average targets have been upgraded in the past week. 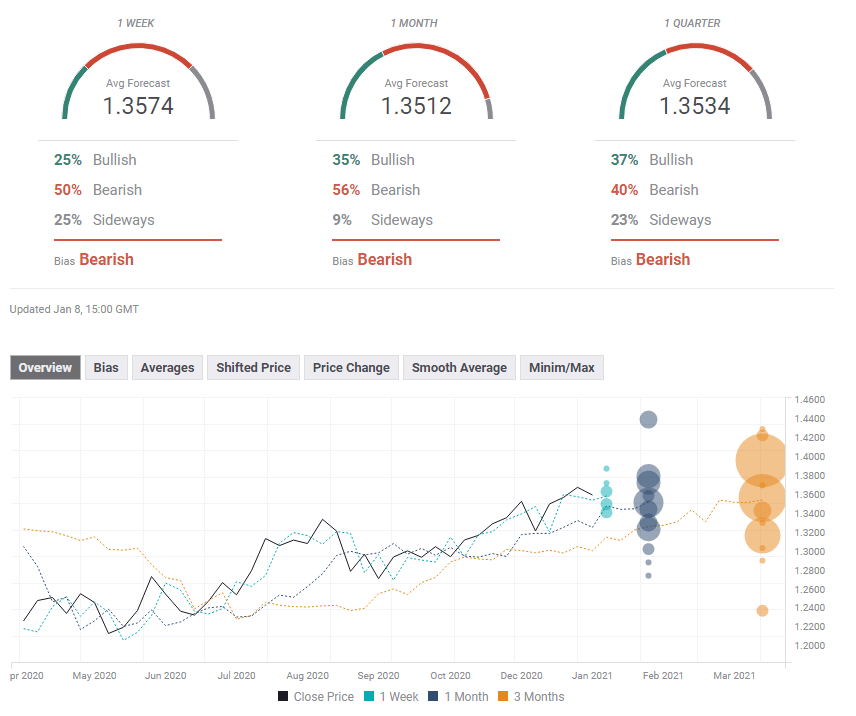 GBP/USD has been on the back foot amid Britain's new lockdown and a mixed reaction to US politics. The vaccine rollout, covid statistics, and US consumer figures stand out in the upcoming week. Mid-January's daily chart is painting a mixed picture for the pair. The FX Poll is pointing to minor drops on all timeframes.   Replacing tiers for fears  - GBP/USD dropped as the UK entered a harsh lockdown to prevent hospitals from collapsing due to the new virus strain. US Democrats' win of the Senate sparked a mixed dollar reaction. Both stories are set for follow-ups and US…