Is Biden’s boost dollar positive or negative for the dollar? The debate continues while US yields remain in the driver’s seat. Britain’s vaccination campaign’s better results and the Fed’s meeting minutes stand out in the post-Easter week.

This week in GBP/USD: Tyranny of Treasuries (again)

All yield to Uncle Sam’s debt – returns on US Treasuries’ correlation to the dollar have been intensifying, but their drivers are becoming more complex. The main development of the past week has been President Joe Biden’s $2.25 trillion infrastructure plan. However, it has not resulted in the same sell-off of US bonds as in the response to the coronavirus relief package, triggering choppier trading.

There are several differences. First, the plan is smaller than the $3 trillion initially touted and was also telegraphed well in advance, allowing markets to digest it calmly. Secondly, it will not be funded solely by debt but rather by higher taxes – and both expenses and income will be spread out over many years. Third, Congress may substantially modify the program in the coming months.

Why the dollar is rising while yields are falling, blame it on the taxman

Treasuries fluctuated and caused jitters, allowing each currency to trade somewhat differently against it. For sterling, that is an advantage. While America ´s vaccination campaign is proceeding at a rapid pace, COVID-19 cases are rising. In the UK, which is more advanced in its immunization drive, the situation is improving. 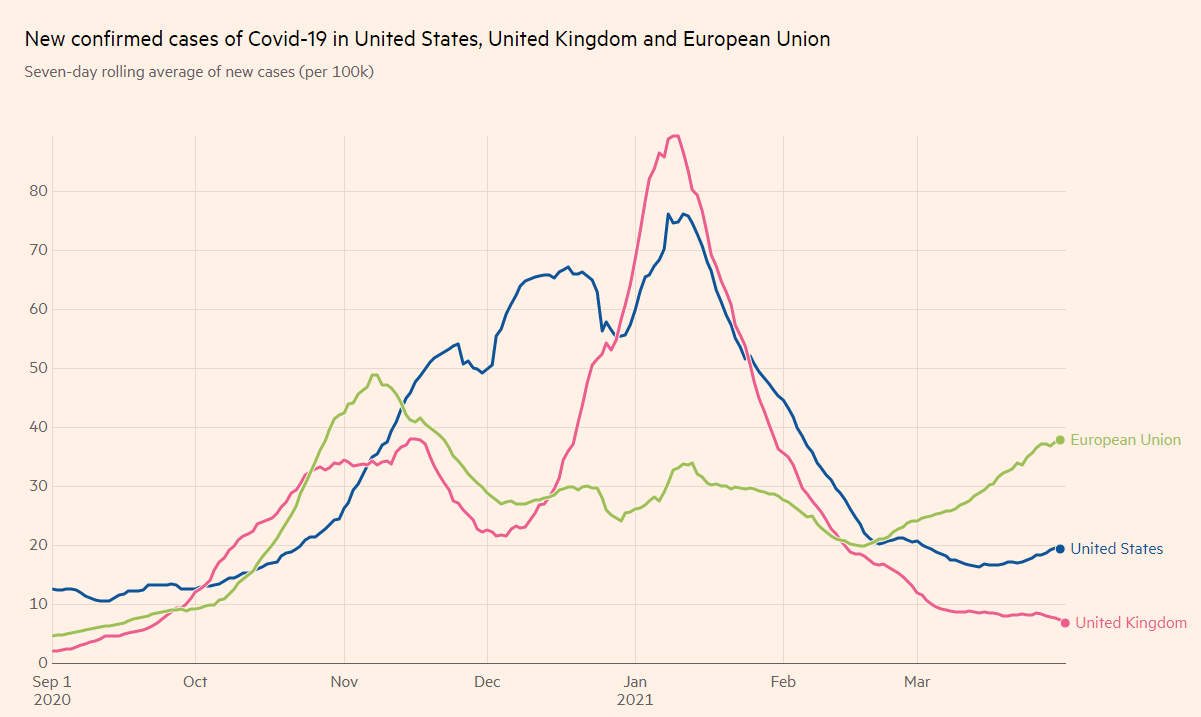 US data has been mostly positive, supporting the dollar. The ISM Manufacturing Purchasing Managers’ Index shot up to 64.7, the highest since 1983, while job growth was also robust.

March’s Nonfarm Payrolls figures were perhaps the best case-in-point – an increase of 916,000, far better than 647,000 projected and on top of upward revisions bringing the total to over one million.

So far, so good for the UK’s vaccination campaign, which is pushing cases lower. However, France’s sharp increase in infections prompted President Emmanuel Macron to announce a month-long lockdown. UK Prime Minister warned that what happens in its southern neighbor reaches Britain within weeks. 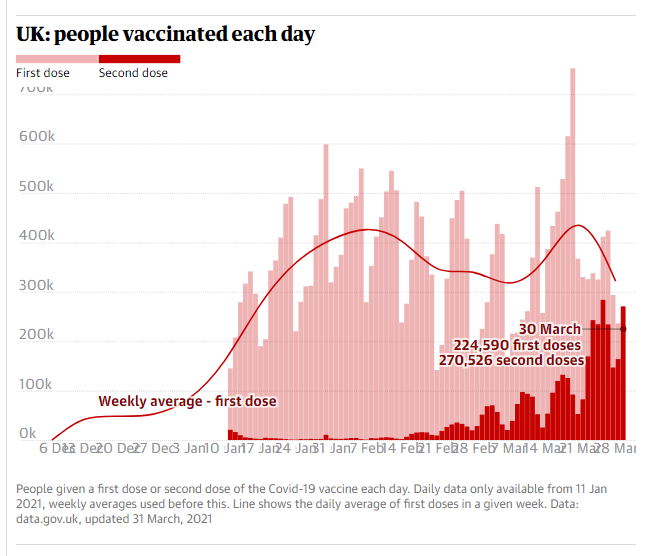 Is the UK immune enough to withstand new infections? The health system has been focusing on second shots, allowing the pace of newly vaccinated people to decrease. The effort has reached over 50% of adults but not half of the population. Averting  a new wave to allow the government to further reopening

The post-Easter week features only low-tier events, with only Markit’s final PMIs worth mentioning. The surprise increase in the gauge for the services sector will likely be confirmed.

Up to 15 million Johnson & Johnson vaccine doses were spoiled – but that is unlikely to derail America’s vaccination campaign, which has reached 30% of its population with at least one dose. President Biden said that 90% of his compatriots will be offered the jab by April 19, and the pace has been impressive so far.

Apart from awaiting a new decrease in infections, investors will be wanting to see the map below become darker.

Vaccine eligibility in the US: 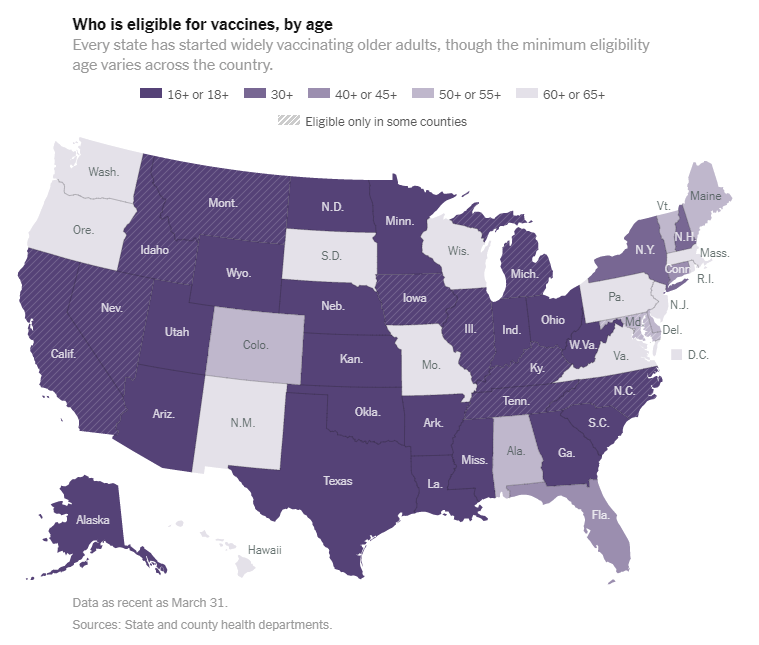 A faster immunization effort would allow further reopening and a quicker return to restaurants and bars which employ many people, accelerating the pace of job gains even further.

While the ISM Services PMI is published after the Nonfarm Payrolls statistics, it provides another look into the thinking of businesses. If the price component advances too fast, the dollar may rise on elevated expectations for a rate hike.

On the other hand, the Federal Reserve’s meeting minutes from the latest rate decision may pour some cold water on the dollar. Officials at the world’s most powerful central bank have urged caution and vowed to support the economy until it is fully back on its feet. The protocols from the latest meeting may serve as a reminder of this approach.

One day after the minutes are released, Federal Reserve Chairman Jerome Powell is slated to participate in a panel about the global economy, and his comment may shake markets. He would be able to comment on the Nonfarm Payrolls. 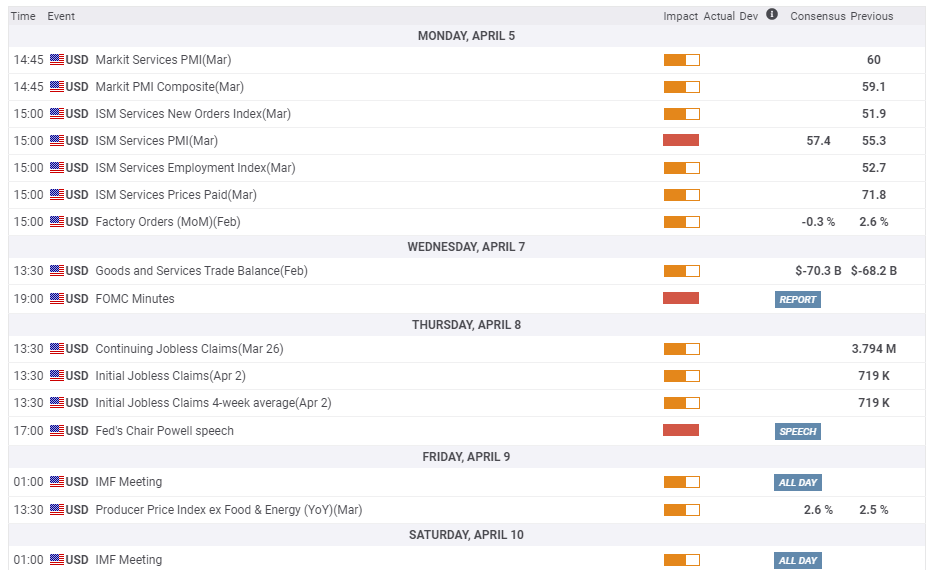 Pound/dollar bulls are not out of the woods just yet – momentum on the daily chart has yet to decisively flip to the upside, and the 50-day Simple Moving Average still hangs above the currency pair. Cable is also still below the broken uptrend support line that used to accompany it. On the other hand, GBP/USD is still trading above the 100-day and 200-day SMAs.

The battle around 1.3850, where the 50-day SMA hits the price, continues. Looking up, the next substantial resistance line is 1.40, which is of psychological significance and also capped the pair during March. Further above, 1.4140 and the 2021 peak of 1.4240 come into play.

The former double-bottom of 1.3775 has been run over several times but remains of importance. March’s low of 1.3670 has a more substantial role in cushioning cable. It is followed by the February trough of 1.3565 and then by 1.3450.

With a helping hand from the Fed and more shots in the arm, GBP/USD has room to resume its gains. However, the strength of the US economy may make any gains short-lived.

The  FXStreet Forecast Poll  is showing that experts are bullish on cable’s prospects – and on all timeframes. They foresee rising prices in the short, medium, and long term. It seems that sterling’s weathering of the recent dollar has convinced those polled of further gains down the road. 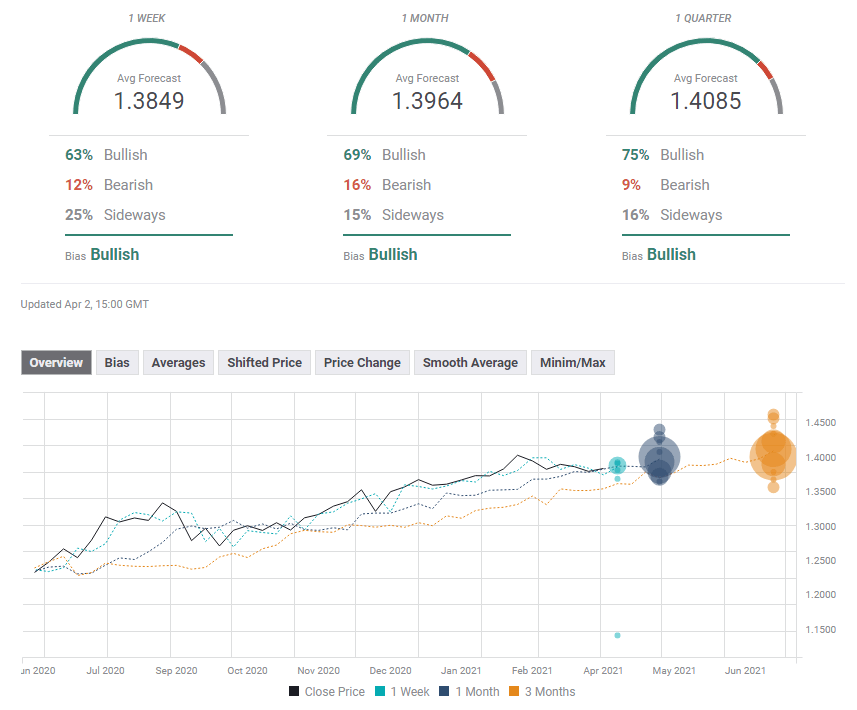 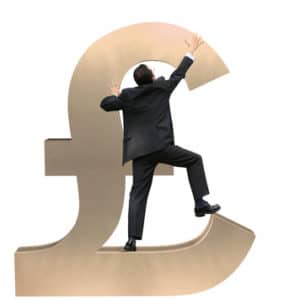 US Pres. Biden: Economy will create 19 million jobs is we pass infrastructure plan

GBP/USD has been rocking and rolling in response to US yields.   Britain's vaccine advantage, the Fed minutes, may allow the currency pair to rise. Early April's daily chart is painting a mixed picture.   The FX Poll is pointing to gains on all timeframes.   Is Biden's boost dollar positive or negative for the dollar? The debate continues while US yields remain in the driver's seat. Britain's vaccination campaign's better results and the Fed's meeting minutes stand out in the post-Easter week. This week in GBP/USD: Tyranny of Treasuries (again) All yield to Uncle Sam's debt - returns on…