– Further political developments and speculation about the BOE are set to dominate trading.

– Wednesday’s four-hour chart is mixed for the currency pair.

Implying that the victims of a devastating fire lacked common sense – this is probably not the best way to kick off an election campaign. Insensitive comments by Jacob Rees-Mogg, a senior Conservative minister related to the Grenfell Tower disaster, have dominated the news as parliament was dissolved ahead of the December 12 poll.

The opposition seized on the gaffe and may gain ground, weighing on the pound. However, opinion polls currently show that Prime Minister Boris Johnson’s Tories are in the lead, but an absolute majority is far from secure.

Labour, the main opposition party, has also been struggling to explain its Brexit stance. Keir Starmer, the shadow Brexit secretary, was having a hard time in laying out the party’s position in a television interview, and the Conservatives’ campaign took advantage of his performance.

New surveys are published daily and may continue moving sterling.

While election-related scandals are fascinating, GBP/USD’s recent downward movement is mostly the result of US Dollar strength. ISM’s Purchasing Managers’ Index for the services sector beat expectations with a jump to 54.7 points, substantially above expectations and reflecting healthy growth. The figure contrasts the manufacturing PMI, which remained below 50 points – reflecting a contraction in the industrial sector.

The UK is experiencing the same phenomenon, albeit by a limited scale. Markit’s Services PMI for October beat expectations with 50 points – precisely at the threshold separating expansion from contraction. On the other hand, the manufacturing sector’s score stood at 49.4 points.

The greenback has also been enjoying optimism about US-Sino trade talks – which may even lead to the removal of tariffs slapped back in 2018. Beijing has requested that the US not only remove the recent 15% levies from September 1 but also the more significant 25% duties from last year. Markets would cheer a deal that includes a broad defusion of tensions, that would reduce the chances of the Federal Reserve cutting rates in 2020. The US position on these earlier tariffs is unclear, but

A light calendar makes way for speculation about the Bank of England’s decision on Thursday. Governor Mark Carney and his colleagues are set to leave their policy unchanged, but their inflation forecasts and comments may rock markets. 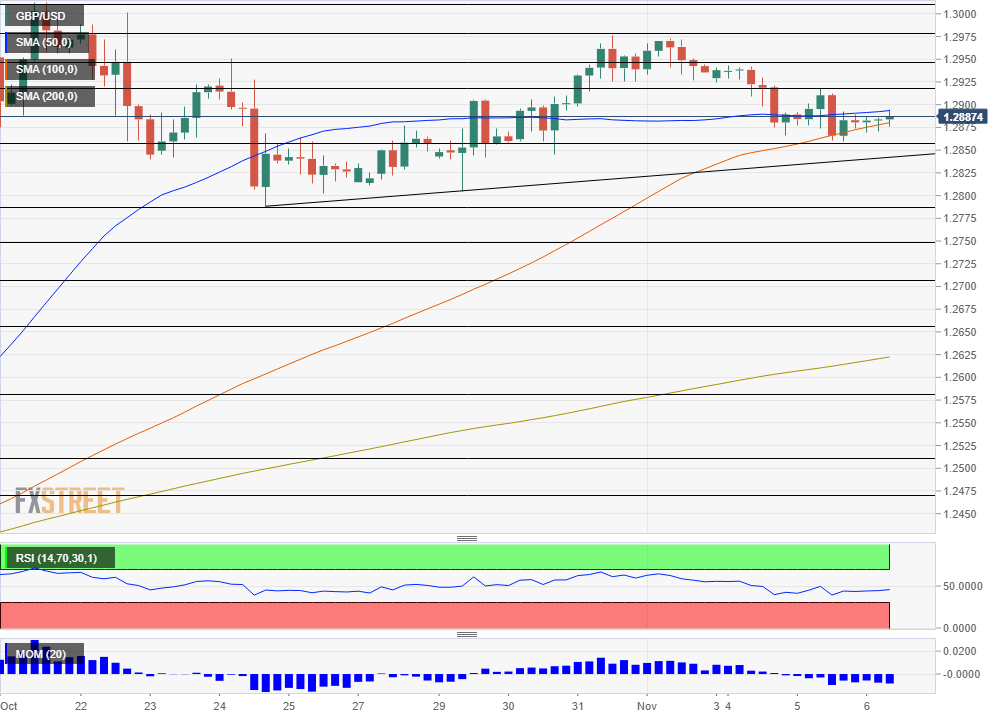 GBP/USD is being squeezed by the 50 and 100 Simple Moving Averages on the four-hour chart but is still holding its head above them. However, the currency pair is suffering from downside momentum.

Uptrend support – accompanying the pair since late October is getting closer.

Immediate resistance awaits at 1.2820, which was a high point earlier this week and provided support earlier. Higher, 1.2950 held sterling down early in the week. It is followed by 1.2980, November’s high, and by the cycle peak of 1.3013.

Background: What is moving sterling?

Brexit has been the dominating factor in the past three and a half years, putting monetary policy and the economy behind. The latest twist in the Brexit saga is the decision to hold elections on December 12.

The inability of the House of Commons to decide on the next steps related to exiting the EU and the desire by the ruling Conservatives and some of the opposition parties to capitalize on poll gains have led parliament to dissolve itself.

The preferred Brexit outcome for markets is to cancel it altogether. However, Boris Johnson’s deal with the EU provides a path for a smooth separation, and investors and pound-positive prefer that.

And while sterling is sensitive to the UK’s exit more than anything else, other policies are also eyed. Seeing Labour leader Jeremy Corbyn installed in Downing Street may result in business-unfriendly policies, weighing on sterling even if Brexit becomes smoother.

Opinion polls heading to the elections are set to rock markets, despite failing to predict the outcomes in the past precisely.

Get the 5 most predictable currency pairs
Previous ArticleCrypto Today – China takes the reins to lead a pro blockchain world
Next Article European retail sales tick higher year on year to 3.1%