Latest
You are at:Home»Forex News»GBP/USD struggling to find a new direction as both currencies suffer

As US President Donald Trump is visiting the UK, both countries’ currencies have suffered from adverse political and economical developments.

Starting from the UK, Markit’s purchasing managers’ index (PMI( for the construction sector has joined the manufacturing PMI in showing a contraction with 48.6 points – below the 50-point threshold that separates expansion from a squeeze in activity. The highly-regarded surveys point to further weakness and uncertainty about the economy.

The British political scene is even murkier. The leadership contest in the Conservative Party has become more complicated after international trade minister  Liam Fox – a staunch supporter of Brexit – endorsed Foreign Secretary Jeremy Hunt which does not favor a hard exit from the EU.

Boris Johnson remains the leading candidate for succeeding Theresa May as PM, but his position was undermined Fox’s support of Hunt. Moreover, President Trump will reportedly meet environment minister Michael Gove who also competes for the top job and wrecked Johnson’s chances in the previous round.

Uncertainty about the leadership weighs on the pound.

Doubts about the person at the top persist in the US as well. Members of Trump’s Republican Party are said to propose a measure to stop the president from slapping punitive tariffs on Mexico – a move that opened a new front in the trade wars. The tensions on the main front between the US and China also refuse to abate after China has issued a travel warning and continues accusing the US of the collapse of trade talks.

The intensifying spat has increased speculation of a rate cut in the US and pushed the dollar lower. This is a new phenomenon that has overtaken the previous market behavior – safe-haven flows into the US on every escalation in tensions. Saint Louis Fed President James Bullard suggested that the Fed should cut rates “soon” further weighing on the greenback.

US data has not been kinder. ISM Manufacturing PMI dropped to 52.1, implying trade wars are taking their toll. US factory orders for April are due today, but markets will be tuned to Fed Chair Jerome Powell’s speech in Chicago which he may comment on monetay policy.

Overall, it is an “ugly contest” between two struggling currencies. The pound currently has the upper hand – but only just. 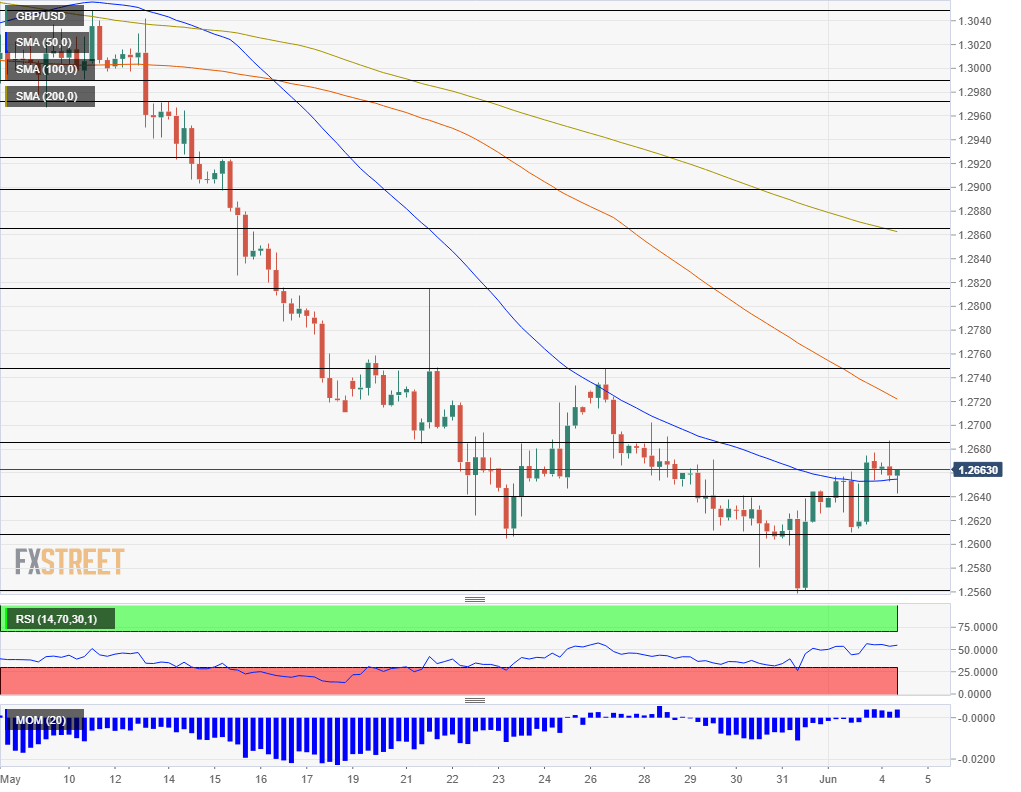 The four-hour chart shows improving conditions for GBP/USD. The currency pair enjoys upside momentum, a rising Relative Strength Index (RSI) and it has crossed above the 50 Simple Moving Average. However, it has yet to set a higher high – a move above 1.2750 is essential.

Looking down, 1.2640 was a swing low earlier in the day and serves as an immediate support line. 1.2605 served as support in late May and also in early June. The next line to watch is 1.2560 – the lowest since January.

Information on these pages contains forward-looking statements that involve risks and uncertainties. Markets and instruments profiled on this page are for informational purposes only and should not in any way come across as a recommendation to buy or sell in these assets. You should do your own thorough research before making any investment decisions. FXStreet does not in any way guarantee that this information is free from mistakes, errors, or material misstatements. It also does not guarantee that this information is of a timely nature. Investing in Open Markets involves a great deal of risk, including the loss of all or a portion of your investment, as well as emotional distress. All risks, losses and costs associated with investing, including total loss of principal, are your responsibility.

Get the 5 most predictable currency pairs
Previous ArticleUSD/JPY fails to hold above 108 as USD weakens ahead of Powell speech
Next Article Ripple is “more reliable service than the legacy system” for SMEs, says Brad Garlinghouse