Latest
You are at:Home»Opinions»GBP/USD: Time to take profits? Why sterling may suffer in back-tos-school week

Fed-fueled dollar weakness has been overshadowing everything – Brexit, coronavirus, and political uncertainty. Will this continue? The all-important Non-Farm Payrolls and their full buildup are set to dominate, but British-related events are also of interest in the back-to-school week.

This week in GBP/USD: Powell punishes the dollar

Inflation can overheat – that is the message from the world’s most powerful central bank, sending the dollar down. Jerome Powell, Chairman of the Federal Reserve, announced a shift in the bank’s policy, aiming for full employment even at the expense of rising prices.

While inflation is nowhere to be seen – and rates are set to remain depressed at least until 2022 – the prospects of zero borrowing costs in the long-term eventually weighed on the dollar. GBP/USD surpassed 1.33, hitting the highest since December 2019.

The greenback sell-off outweighed everything else – including several upbeat US figures such as personal spending, personal income, and second-quarter growth figures which all exceeded estimates. It is essential to state that not all statistics were positive, as continuing claims remained stubbornly high at 14.5 million.

On the other side of the pond. EU-UK relations seem to be worsening as Brussels reportedly laid out an ultimatum to London – achieving a breakthrough within two weeks. German Chancellor Angela Merkel said it is time for decisions, also showing impatience.

UK coronavirus cases are on the rise, hitting the highest since June, and the Reproduction rate may have surpassed the critical 1 level. The rise in infections is causing headaches to the education system which is scrambling open schools safely. 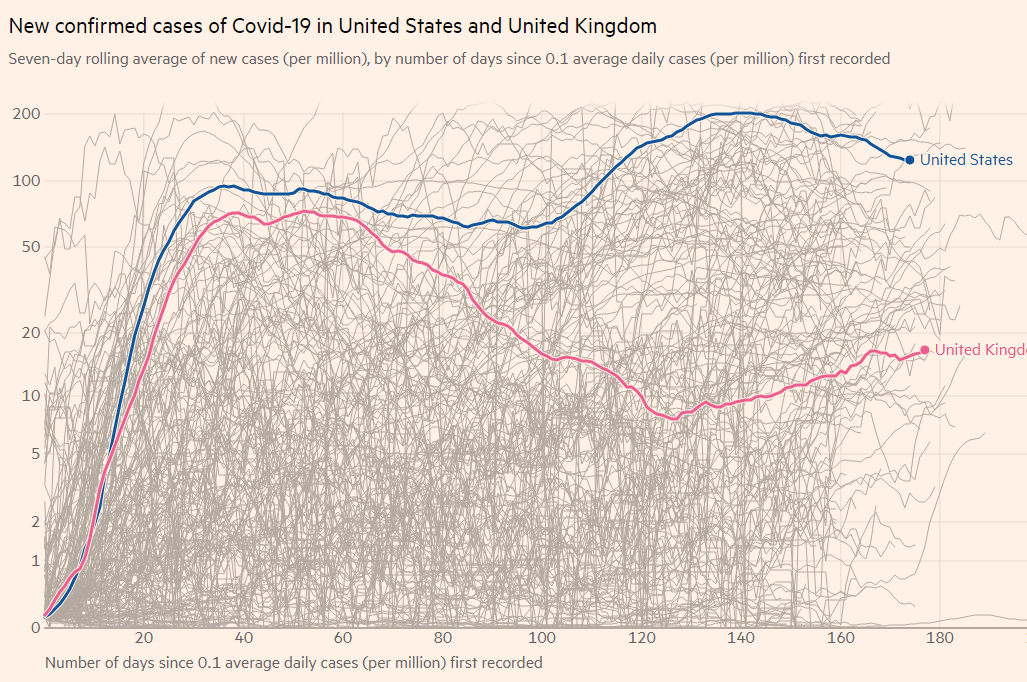 Reports that Prime Minister Boris Johnson is considering stepping down in six months have been denied, but continue swirling. The PM is reportedly struggling with “long COVID” – the aftereffects of suffering from coronavirus. Downing’s Street’s denial has helped sterling rise, but speculation may return.

Brits enjoy a bank holiday on Monday but brace for a busy September beginning Tuesday. Reopening schools without incidents nor backtracking is critical to supporting the recovery – as parents would be able to work without interruptions. It would also provide a sense of normality.

COVID-19 statistics will also be followed and investors would like to see the current uptrend stall without risking overwhelming the health systems.

There are no official rounds of Brexit talks scheduled for early September, but the end of Europe’s holiday season implies a significant chance that officials will provide statements or talk to the press. Many expect a breakthrough only around the next EU Summit in October – or even closer to the last minute

The economic calendar features several speeches from Bank of England officials, including Governor Andrew Bailey. As the BOE is set to remain on hold for some time, perhaps an unscheduled announcement about the furlough scheme – set to expire in October – would be of higher interest.

Rishi Sunak, Chancellor of the Exchequer, has been praised for the program in which the government pays most of the salaries of those unable to work due to the pandemic. However, Sunak also said the scheme is unsustainable.

US events: Non-Farm Payrolls, politics, and the virus

The US coronavirus case curve continues falling – but deaths remain at stubbornly high levels. While investors’ attention is on vaccines, cures, and fast tests, such statistics remain of high interest.

COVID-19 figures also play a role in politics. After the party conferences are over, fresh opinion polls may show a shift after several stable months. Trump is trailing Biden nationally but is closer in battleground states. So far, markets have been ignoring politics, but that may change.

The highlight of the week is Friday’s Non-Farm Payrolls report for August, which is projected to show ongoing job restoration, but at a slower pace than July’s near 1.8 million increase. The unemployment rate is projected to edge down to just below 10%, albeit alongside a low participation rate.

A slowdown in the recovery may weigh on the dollar, while an increase of closer to two million positions could boost it.

The NFP is preceded by several hints. The ISM Manufacturing Purchasing Managers’ Index is projected to continue reflecting expansion – a score above 50 – while the employment component is forecast to remain below that threshold, pointing to poor hiring conditions.

The same goes for the larger services sector. The ISM Non-Manufacturing PMI – published on Thursday for a change – will likely shape expectations as well, especially if the employment component significantly deviates from the low levels it is expected to hit.

Wednesday’s ADP private-sector jobs report lost some of its impact after considerably diverging from official statistics in the coronavirus era. Nevertheless, this NFP hint, factory orders, and jobless claims are also of interest.

After the Relative Strength Index on the four-hour chart already entered overbought conditions, the RSI on the daily chart is nearing that position. The previous rise above 70 resulted in a consolidation phase in early August. Will cable stall, experience a sharp correction, or defy these conditions?

Other indicators remain positive. Pound/dollar is trading above the 50, 100, and 200 Simple Moving Averages, and momentum remains positive, despite weakening.

While a downbeat Non-Farm Payrolls report may weigh on the dollar, Brexit headlines, jitters in returning to school, and profit-taking could push cable lower.

The FXStreet Forecast Poll is showing that experts are doubtful about the recent rise and foreseeing falls in all timeframes – with falling targets. The low targets come despite upgrades in comparison to last week.