GBP/USD: Volatility set to blow up with Brexit news, vaccine, technicals point up

GBP/USD has hit new cycle  highs amid Brexit optimism, yet trading remained nervous and choppy. The vaccine approval and hopes for US fiscal stimulus were decidedly positive, and all three themes will likely dominate the scene again, with UK growth and US consumer statistics having their time in the sun as well.

This week in GBP/USD: Brexit headlines cause jitters

Brexit: At the time of writing, intense talks continue in London with hopes outweighing concerns, but uncertainty remains high and nerves are wracked. The three main issues – fisheries, governance and a level-playing field – are still unresolved.

During the week, upbeat headlines of an imminent deal contrasted concerns that France may veto any compromise made by Chief EU Negotiator Michel Barnier, a Frenchman. It is useless to document all the back and forth, but traders’ bottom line was an increase in volatility. Deliberations are set to continue through the weekend.

The UK is the first Western country to approve a COVID-19 vaccine – regulators gave the green light to the Pfizer/BioNTech immunization jabs, and they are planned for delivery shortly. The news boosted the pound and weighed on the safe-haven dollar, a win-win for cable bulls, despite authorities’ early telegraphing of this approval. Moderna also filed for usage.

PM pressured: Prime Minister Boris Johnson faced another rebellion from Conservative backbenchers but passed the return to localized restrictions after the nationwide lockdown expired. Sterling seemed to shrug off this sign of political weakness, for now.

The optimism about the upcoming vaccine was somewhat compounded by the ongoing drop in Britain’s coronavirus cases. The US also experienced a drop in cases, yet the data was skewed by the Thanksgiving holiday. America’s hospitals continue hitting record covid admissions. 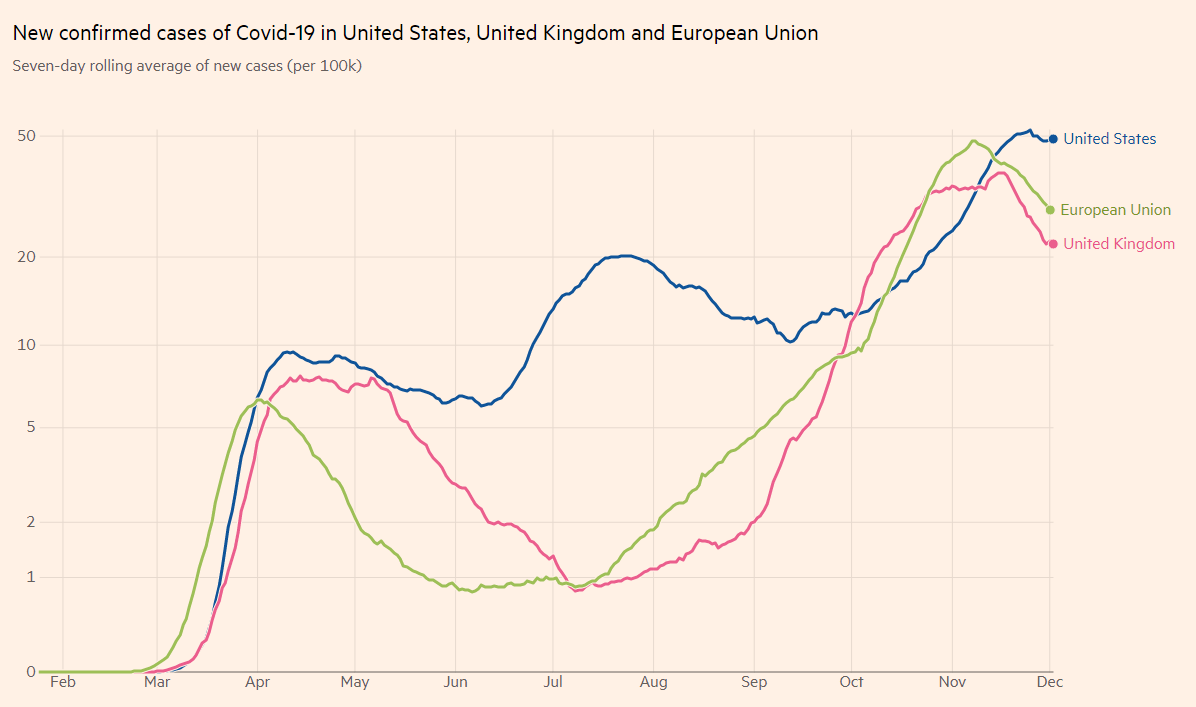 On the other hand, optimism came from Washington. A bipartisan group of senators laid out a $908 billion stimulus plan that may pass during the lame-duck session. In any case, President-elect Joe Biden vowed to strive for further relief upon entering office.

Outgoing President Donald Trump suffered additional blows in his attempt to overturn the elections as Arizona and Wisconsin certified victories for Biden. Reports suggest he is already planning his 2024 run, an acknowledgment of his loss.

Hawkish Biden: The incoming Commander in Chief told the New York Times that he would first conduct a review before removing tariffs on China. Markets were somewhat disappointed by the lack of detente between the world’s largest economies.

Data leading toward the jobs report fell short of expectations, with the ISM Manufacturing Purchasing Managers’ Index dropping to 57.5 points and ADP’s private-sector jobs report missing estimates with 307,000. The data weighed on the dollar, in what appears to be a return to normal reactions – weak data weigh on the greenback instead of triggering safe-haven flows.

Nonfarm Payrolls disappointed with an increase of only 245,000 jobs, pointing to a slowdown in the recovery.

Deal or no deal? If the EU and the UK announce an accord, the pound has room to surge. While markets lean toward optimism, an agreement is not fully priced in. Conversely, if talks collapse, there is room for a substantial fall and ongoing contact about an interim deal. A temporary arrangement would keep uncertainty and volatility elevated.

The first inoculations of the covid vaccines are due on Tuesday 8. The media will be following the distribution of the doses, which require shallow temperatures. Any hiccups in the initial delivery could weigh on the pound and boost the greenback. In the days following the first inoculations, any reports about side effects could have the same downside effect. Conversely, if everything goes smoothly, GBP/USD has room to rise.

The highlight of the relatively light economic calendar is Gross Domestic Product for October. After a collapse in the second quarter and a rebound in the third one, a modest increase is likely early in the fourth one. The nationwide lockdown entered into force only in November. Manufacturing figures are also of interest.

Will the “lame duck” session in Congress produce a stimulus bill? Markets will probably take whatever they can now and hope for more later. With the presidential elections settled, politicians seem more willing to compromise, but that does not promise a deal.

It is essential to remember that Georgia’s special elections in early January will determine the Senate’s fate. Moreover, Trump may want to inject some measures before signing any bill, potentially causing a delay.

In the meantime, the need to provide economic support is growing as the virus continues raging. The uptrend’s pause was only a mirage due to the reporting issues around Thanksgiving. Now, holiday travel has likely exacerbated transmission. Figures reflecting family visits may come into sight shortly.

On the other hand, the Food and Drugs Administration (FDA) is set to authorize Pfizer’s vaccine on Friday. The US regulator is more rigorous than the UK one, and its seal of approval could boost markets and weigh on the safe-haven dollar.

The US calendar is busier, with inflation standing out ahead of the Federal Reserve’s decision later in the month. While the central bank changed its policy to prioritize full employment at the expense of higher inflation, a significant increase in prices could push any additional buying forward. The Core Consumer Price Index is expected to rise from 1.6% to 1.8% yearly in November.

Another substantial release is the University of Michigan’s preliminary Consumer Sentiment Index for December. Economists expect it to stabilize after dropping in November. 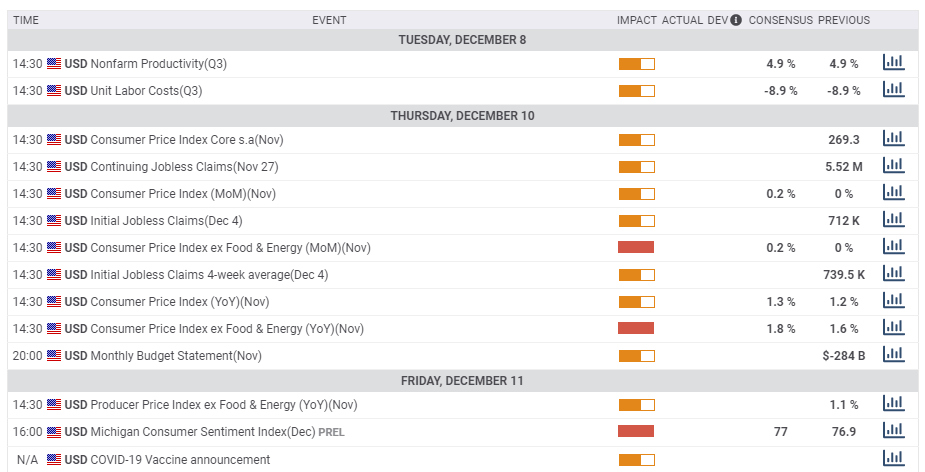 Pound/dollar has been extending its gains, benefiting from upside momentum on the daily chart. It is capped by uptrend resistance that has been accompanying it since mid-October, and trades well above the 50-day, 100-day and 200-day Simple Moving Averages. So far, the Relative Strength Index remains below 70, thus outside overbought conditions. This may change if the move extends further.

Overall, the bulls are in full control. 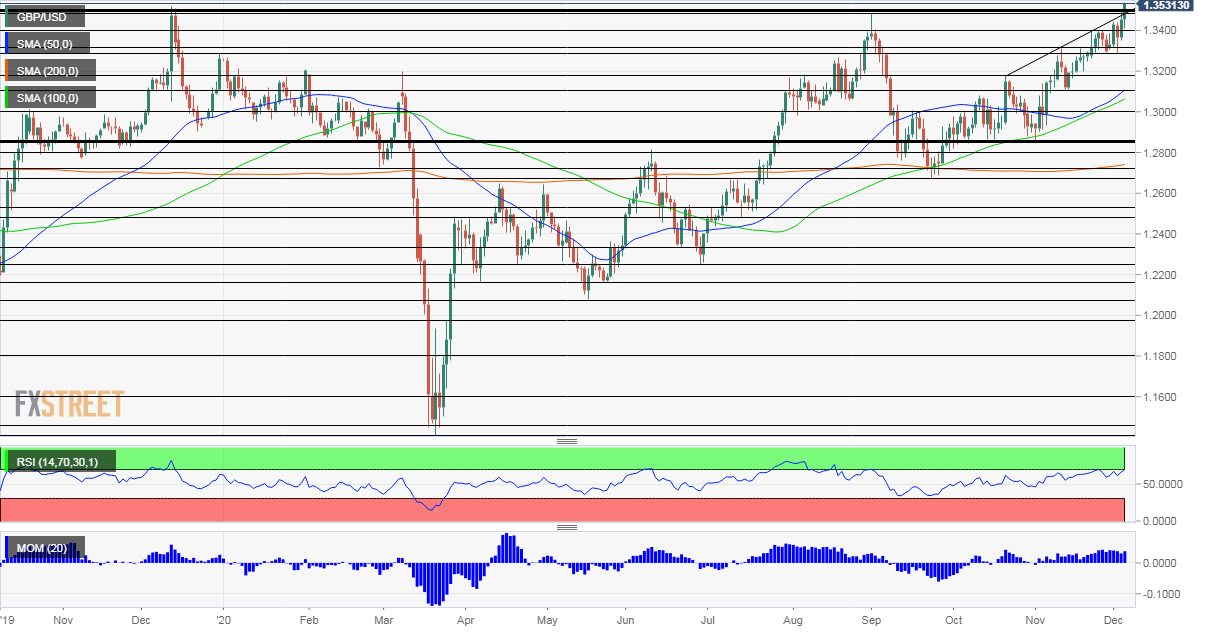 Both the EU and the UK have more to gain in a deal, and the last-minute posturing could be the darkest before dawn. Fresh vaccine developments could weigh on the dollar. Overall, there is room for more upside, probably with bumps on the road.

The  FXStreet Forecast Poll  is showing that experts are not buying this recent rally and are bearish on all timeframes. The lowest target is expected in the medium-term – just after the transition period expires. Average targets have been pushed higher, but doubts persist. 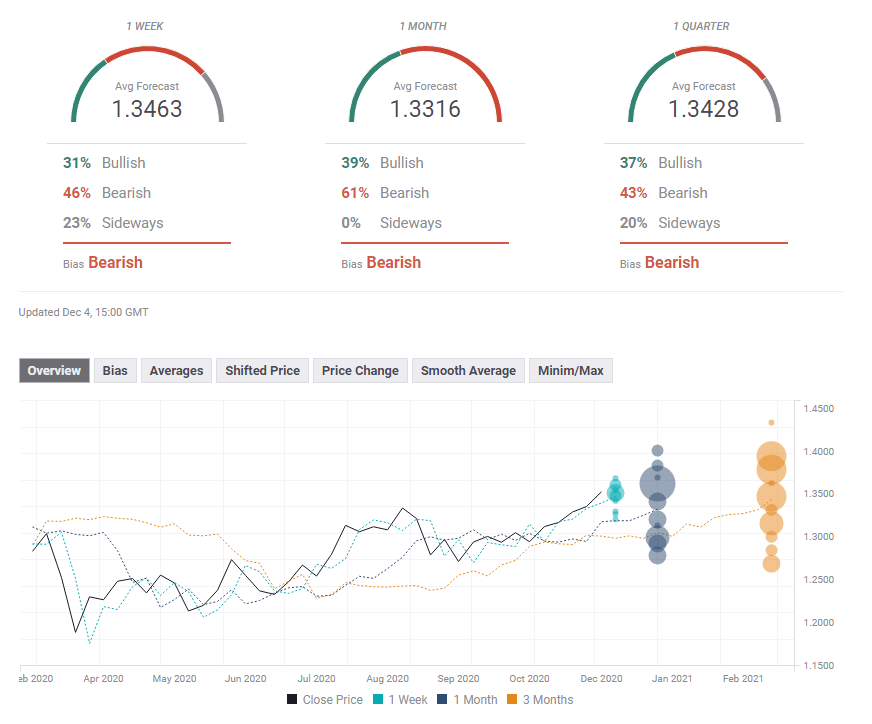 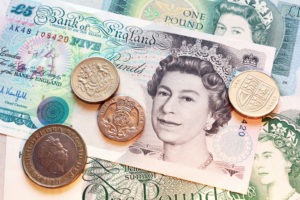 GBP/USD has been whipsawed by Brexit headlines  but continues trending higher. EU-UK talks, Britain's GDP, US inflation and covid developments are eyed. Early December daily chart is painting a bullish picture, yet nearing stretched conditions. The FX Poll is pointing to a downward correction   GBP/USD has hit new cycle  highs amid Brexit optimism, yet trading remained nervous and choppy. The vaccine approval and hopes for US fiscal stimulus were decidedly positive, and all three themes will likely dominate the scene again, with UK growth and US consumer statistics having their time in the sun as well. This week in…