Brits are back to the pubs after 97 dry days, and this great British reopening has been one of cable’s boosters, alongside inflation-related dollar weakness. Apart from covid news, GBP/USD is set to rock in response to a series of top-tier UK data points.

This week in GBP/USD: Back to the pub and Powell’s taper talk

A hangover – that is perhaps the worst side effect of the return to the pubs, part of the UK’s reopening. Anecdotal evidence that Brits are back to stores has supported sterling. Fortunately, it is accompanied by an ongoing decrease in COVID-19 cases, at least for now.

In the US, infections are edging higher, albeit at a moderate pace. At the time of writing, nearly half of Britain’s population received at least one vaccine shot, while America’s rate is below 40%. 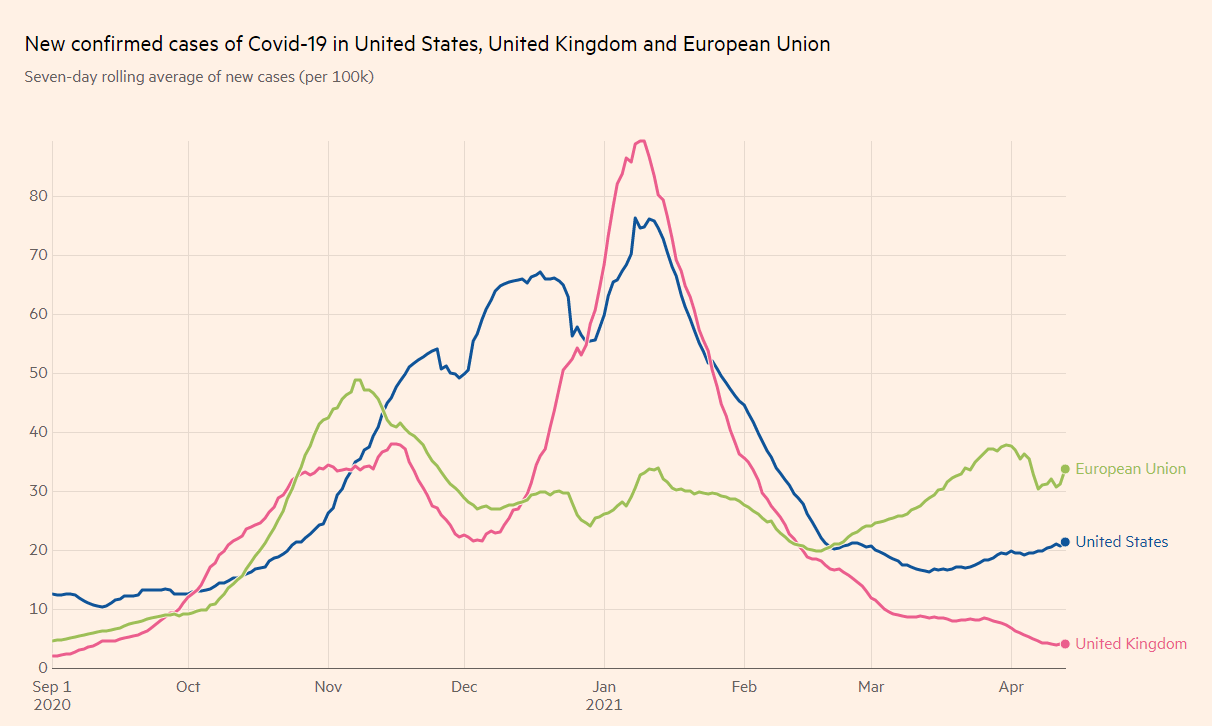 The US immunization drive suffered a minor setback after authorities halted the administration of Johnson & Johnson’s single-shot inoculation, owing to rare cases of blood clots. Even if the delay extends beyond several days, the US had more than enough doses to vaccinate its entire population before the announcement. Moreover, Pfizer has ramped up its dose deliveries.

The main dollar drivers came from critical data points. US inflation bumped up in March, but less than markets had anticipated following the robust producer prices report. The Core Consumer Price Index hit an annual rate of 1.6%, similar to levels last seen in the autumn and below the pre-pandemic range.

While the global chip shortage and anecdotal evidence of supply strains are mounting, prices are far from being pressured to the upside – at least not now.

However, the next bulk of US economic figures already boosted the greenback. Retail Sales soared by 9.8% in March, smashing estimates as Americans armed with stimulus checks went on a shopping spree. Yet it is not only that sugar rush that contributed to an upswing in the economy, but also a sharp drop in those out of work – weekly Unemployment Claims fell to 576,000, the lowest pandemic-era read.

Jerome Powell, Chairman of the Federal Reserve, said that the bank would first taper its bond-buying scheme and only then raise interest rates. While that was not earth-shattering news, the mere mention of reducing purchases was perceived as a signal that the Fed is warming up to that option. The dollar recovered in response.

Moreover, Fed Vice-Chair Richard Clarida added that any indication of such tapering would come in one of the bank’s meetings, including the publication of new forecasts. Some analysts marked June as a potential point for such a move.

On the political front, President Joe Biden focused on the withdrawal from Afghanistan and other non-market-related topics while Congress is working on the details of his infrastructure plan in the background.

All in all, optimism prevails on both sides of the pond – some relief with US inflation weighing on the dollar and allowing the pound to recover.

Coronavirus statistics remain of importance to sterling. Keeping infections down while the economy is significantly more active than beforehand is critical to the next lifting of restrictions.

Low infections also prove the success of vaccinations, where the campaign remains focused on providing second doses rather than reaching new people at this point. Nevertheless, Britain is close to reaching 50% of its population, and hitting that milestone could further boost sterling.

As the chart shows, 48.4% have already received one shot at the time of writing: 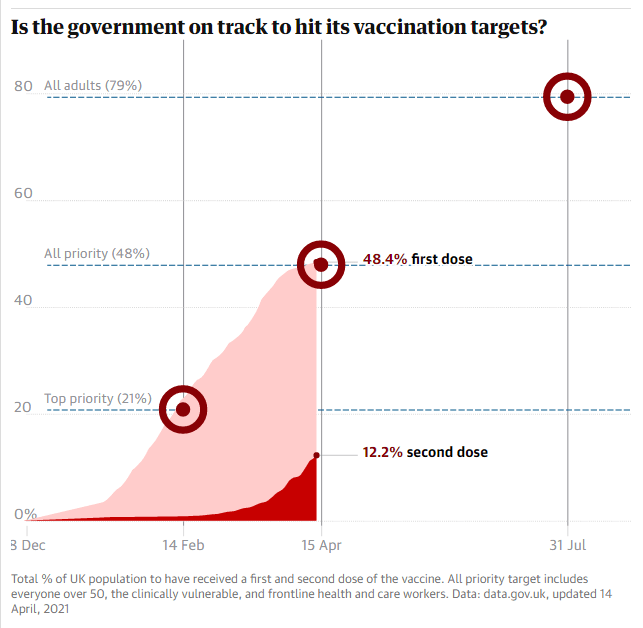 While shots go to arms, top-tier economic data is set to rock sterling. Economists expect an increase in the Unemployment Rate from 5% in January to 5.2% in February. Investors will also be eyeing the Claimant Count Change for March after February’s worrying leap of 86,000. The government’s furlough scheme has kept the labor market afloat.

After US inflation failed to send shockwaves, Britain’s CPI figures for March are projected to double from 0.4% to 0.8%, but that would still be far from the Bank of England’s 2% target. Any faster increase could support sterling.

BOE Governor Andrew Bailey is slated to speak shortly after inflation figures are due out, and he may provide commentary on the latest developments and whether the bank could consider tightening later this year.

Britain’s Retail Sales statistics for March may also follow America’s. While Brits did not receive stimulus checks, the first stage of the reopening occurred early last month and may have boosted spending. An increase is on the cards. 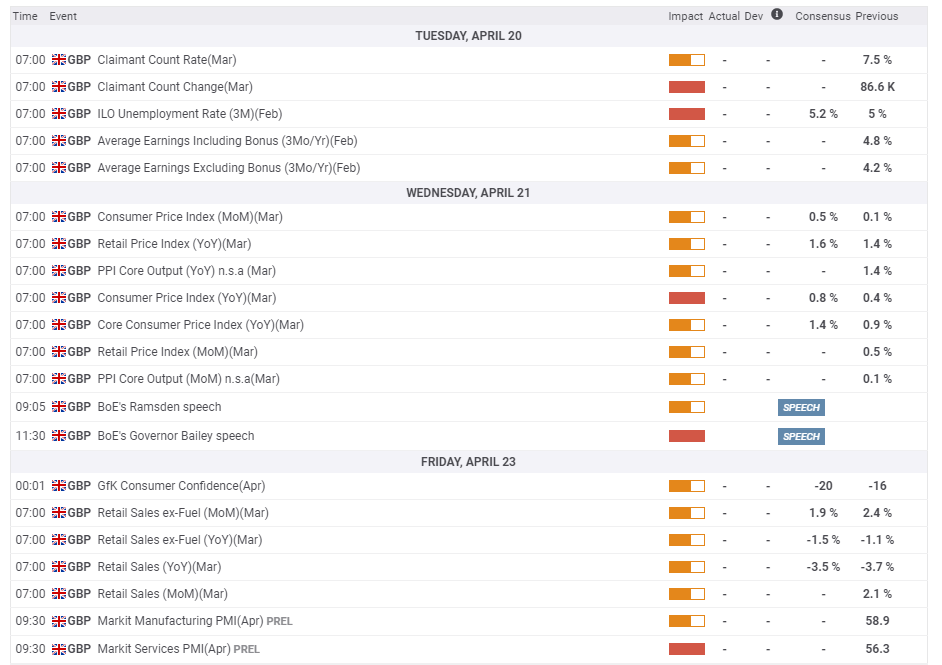 The pace of US vaccinations has been defying skeptics who thought it would slow down. All Americans will be offered COVID-19 vaccines from April 19, and perhaps another week of robust inoculations is due before an inevitable slowdown later on.

The faster shots go into arms, the quicker America returns to business, and potentially, inflation could rise. That would nudge the Federal Reserve to raise interest rates sooner rather than later. 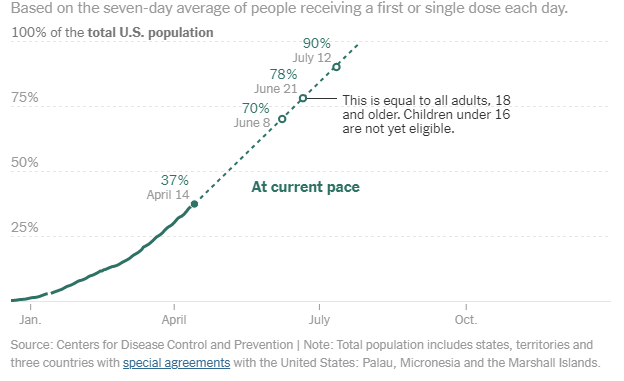 The most significant unknown is what the Federal Reserve will do in response to mounting evidence of an economic surge. Officials are set to remain mum in the bank’s “blackout period” before their meeting in the following week, but markets never remain quiet.

Will bond yields rise in anticipation of earlier rate hikes? That would carry the greenback higher. On the other hand, concerns about supply strains could tamp down estimates for a superb recovery and send returns on US debt and the greenback lower.

Biden’s infrastructure plan has been on the back burner but is set to return to center stage. Any progress would be dollar positive, while setbacks due to internal disagreement with the president’s Democratic Party could weigh on the greenback.

After the flurry of consumer data, the calendar is lighter. Weekly jobless claims stand out, and Markit’s preliminary PMIs for April could also rock the dollar, especially if they exceed their upward swing. New Home Sales will likely remain robust as the “race for space” – larger homes for those working at home – is in full gear.

The daily chart shows that cable is setting lower highs but is holding up above critical support at 1.3670 – bouncing off that level again. Pound/dollar also sprang off the 100-day Simple Moving Average (SMA) but remains capped under the 50-day SMA. Momentum remains to the downside, albeit less than beforehand.

All in all, the tug of war between bears and bulls persists.

The US economy is roaring, and the dollar has yet to take advantage of this fully. While Britain’s vaccination campaign – and upcoming data – support sterling, America’s immunization catch-up diminishes the pound’s advantage on that front. All in all, there may be more room to the downside.

The FXStreet Forecast Poll shows that experts foresee another slide in cable’s value in the upcoming week, but could perhaps serve as a buying opportunity – as average targets are higher in the medium and long terms. On the other hand, it seems that the ongoing weeks of weakness have convinced some to reduce their forecasts for the medium and long terms from higher levels. 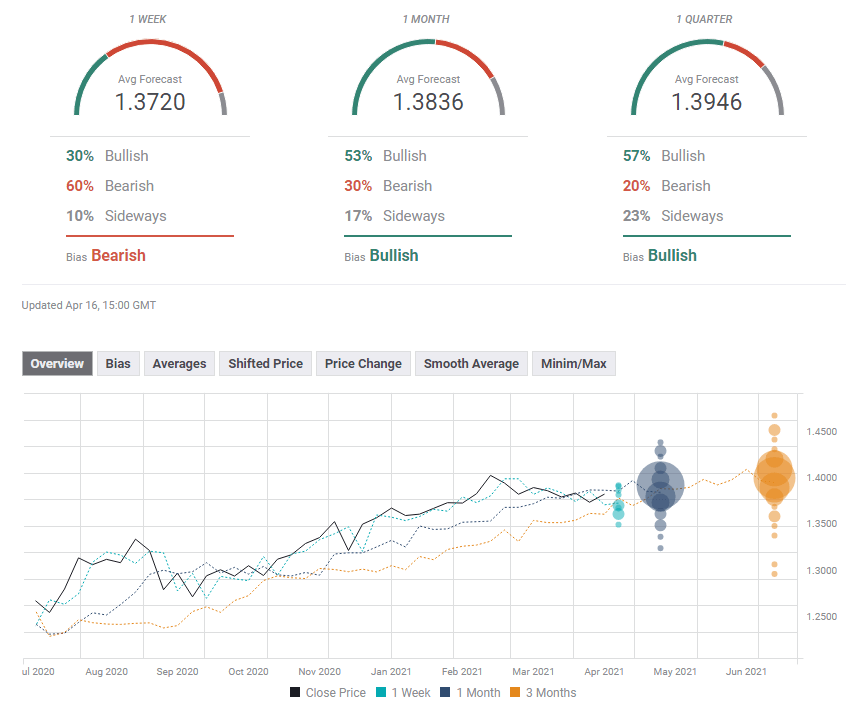 Get the 5 most predictable currency pairs
Previous ArticleGold Price Analysis: XAU/USD bulls eye $1,798 as next target – Confluence Detector
Next Article US: Housing starts increased across every region – Wells Fargo